You are here: Home / Special Report / 44-2: Globalization / The Impact of Brexit on the Free Movement of Persons
Reading Time: 7 minutes

Citizens of the European Union (EU) are allowed to live and work, without special formalities, in the European Economic Area (EEA). The EEA includes the EU’s 28 Member States as well as Switzerland and three non-EU countries – Iceland, Liechtenstein and Norway. This is what we call “free movement of persons”.

The 1957 Treaty of Rome established the European Economic Community (ECC) (replaced by the EU). It created a common market based on free movement of people, goods, capital and services.

The 1992 Treaty of Maastricht created the EU and established freedom of movement and residence for persons in the EU. In 2004, the EU adopted Directive 2004/38/EC, on the right of EU citizens and their family members to move and reside freely within the EU. Then, in 2007, the Treaty of Lisbon and the Treaty on the Functioning of the EU (TFEU) confirmed the right to freedom of movement.

… EU citizens do not require a visa in order to come to the UK. Those coming to the UK are not subject to rules on English language proficiency. The exclusion of an EU citizen must be justified on the grounds of public policy, public security or public health. (See: Brexit: what impact on those currently exercising free movement rights? (“Brexit Paper”) at p 7).

EU citizens who reside legally for a continuous period of five years in a Member State other than their own acquire the right of permanent residence in their host state. EU citizens acquire this right automatically. They do not need to apply for it. (See Brexit Paper at p 7).

According to migration experts, it is going to be very hard for the UK to end freedom of movement from the EU because it has no system to find out who is legally in the country.Europeans realized that freedom of movement was the EU’s major achievement and rated it above peace, the single currency and student exchanges. According to Eurostat data, at the end of 2017, 3.8% of EU citizens (17 million people along with 1.4 million commuters) resided or worked in Member States other than those of which they are citizens – up from 2.5% in 2007.

The United Kingdom (UK) joined the EEC in 1973 and the EU in the 1990s. But unlike other EU countries, the UK never accepted that its institutions be under the European control. For this reason, the UK did not join either the Schengen Area, which removes internal border checks, nor the common currency.

On June 23, 2016, the UK held a referendum to decide whether it should leave or stay in the EU. Leaving won by 52% to 48%. More than 30 million people voted, and 17.4 million people voted for withdrawal from the EU. The UK’s possible exit from the EU became known as Brexit. Globalization, immigration and low wages were the main factors that lead to Brexit.

Those who voted to leave the EU did not want the UK to be under the EU’s freedom of movement rules, due to the number of people moving to the UK under these rules. For the “leavers”, leaving was the only way to stop EU citizens from immigrating to the UK since the free movement of persons is a fundamental right guaranteed by the EU.

Former British Prime Minister Theresa May promised that Brexit would end free movement in order to restore UK’s sovereignty over its policy regarding EU citizens. She said that the UK “will do what independent, sovereign countries do: we will decide for ourselves how we control immigration” (See: Brexit: UK-EU movement of people at p 20). 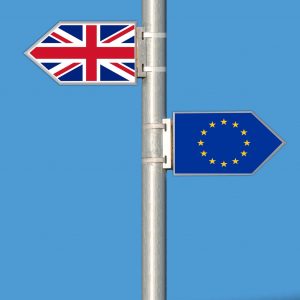 Negotiations on how to leave the EU started in September 2016. Among the most important issues was the principle of free movement of EU citizens after withdrawal.

After voting to leave the EU, the British government triggered Article 50 of the Treaty on European Union (TEU). Article 50 allows a Member State to withdraw from the EU and sets out the process by which a Member State leaves the EU. Once a Member State notifies the European Council of its intention, the EU will attempt to negotiate and conclude an agreement with the state in question, setting out in detail the arrangements for its withdrawal.

A draft Brexit withdrawal agreement, negotiated between the UK and the EU, contained these arrangements. In order to be legally binding, both the UK and the EU had to ratify the agreement. The draft dealt with the UK’s future financial obligations, the status of EU citizens in the UK and British citizens in the EU, and the Irish border. The draft also provided for a transition period until December 31, 2020, in which the free movement of persons stayed the same. However, the British Parliament rejected this draft, and exiting the EU on March 29, 2019 became impossible.

Under the current British immigration system, EU citizens who live and work in the UK do not need any documentation besides a valid passport. The UK does not have a formal government registry of people who moved to live and work in Britain. There is only an estimated figure of 3.5 million EU citizens in the UK. If freedom of movement were to end any time soon, the British government would have no way to differentiate between the EU citizens who are eligible to stay in the UK and those who have recently arrived in the country. All what we know is that one million EU citizens have already applied for settled status through the EU Settlement Scheme.

On June 23, 2016, the UK held a referendum to decide whether it should leave or stay in the EU.Former Prime Minister Theresa May’s government had planned that freedom of movement would continue until the end of December 2020. If there was no Brexit deal in place, EU citizens living in the UK would have to apply for a new legal status to remain in the country by this deadline. If there was a Brexit deal, the deadline was to be extended until June 2021. However, in August 2019, the British government stated that it would seek to end the immigration of EU citizens to Britain immediately after it leaves the EU on October 31, 2019.

British Prime Minister Boris Johnson previously stated that the UK would leave the EU on October 31, 2019 with or without a Brexit deal. However, he asserted he could make a revised agreement with the EU before that date. It is important to note that the British Parliament rejected the agreement made by former Prime Minister Theresa May three times, leading to her resignation.

Nicholas Hatton, the3million founder (a citizens group that represents the rights of EU citizens in the UK) said: “The idea of ending freedom of movement abruptly on 31 October in case of no deal is reckless politics.” He added:

Ending freedom of movement without putting legal provisions in place for those EU citizens who have not yet successfully applied through the settlement scheme will mean that millions of lawful citizens will have their legal status removed overnight.

We have been calling for the settlement scheme to be a declaratory registration scheme, so all EU citizens who have made the UK their home are automatically granted status, as promised by those in government.

Otherwise this will open the door to mass discrimination under the hostile environment, with employers, landlords, banks and the NHS unable to distinguish between those EU citizens with the right to live and work in the UK and those without.

Joe Owen, the Institute for Government’s programme director for Brexit, said it would be “wide open to judicial review.” He added:

To do that [end freedom of movement on October 31] in any meaningful way would cause major disruption – employers, citizens and universities are completely unprepared for this last-minute U-turn.

In fact, given the consequences of leaving the EU without a deal on October 31 and despite the promises made by Prime Minister Boris Johnson, Brexit was extended one more time.

On October 28, 2019,  and upon the request of Prime Minister Johnson, the EU granted the UK another three-month extension until January 31 to find a way out. The UK will also have an early general election on December 12, 2019. In the meantime, the UK will remain in the EU but can leave before that date if the current withdrawal agreement is agreed upon earlier.

According to migration experts, it is going to be very hard for the UK to end freedom of movement from the EU because it has no system to find out who is legally in the country. EU citizens who are living in the UK will have until December 31, 2020 to apply to the EU Settlement Scheme if there is no deal. The scheme’s purpose is to register around 3.3 million EU citizens in order to allow them to continue living and working in the UK after June 30, 2021.

The British government has insisted that it wants to secure the rights of EU citizens already living in the UK. That would change only if EU countries do not protect the status of UK citizens living in them. We still have to see how this is going to take place.