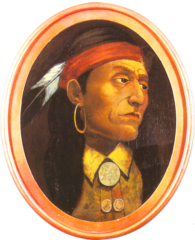 The Royal Proclamation of 1763 resulted directly from the Seven Years’ War (1756-1763) between Britain and France.  This conflict was in the nature of a world war with fighting principally in North America, the Caribbean, and India.  With the Treaty of Paris of 1763 which ended the hostilities, Britain emerged victorious and a world power.  However, Britain’s dominance in North America created new problems for her which she unsuccessfully attempted to solve through the Royal Proclamation of 1763.

During this war, General James Wolfe defeated the French General, the Marquis de Montcalm, on the Plains of Abraham in 1759 and the British completed the submission of New France with the capitulation of Montreal in 1760.  However, the war continued in the Caribbean and India.  Consequently, there was a hiatus between the fall of New France and the peace conference which settled the conflict. Thus, until this “world war” ended, Britain established a military government of occupation to rule over her newly acquired territories in North America, since she was uncertain whether she would retain these lands at the peace conference at the war’s end.  The British military regime did not ensure peace in the region.

In the North American theatre of war, both the British and French had been supported by aboriginal allies.  With the defeat of the French, the First Nations lost their bargaining position between the two European rivals. The allies of the British had been promised better deals in trade after the war, but instead, British traders raised their prices and displayed less interest in curbing liquor sales.  In addition, the British immediately cut off “gift” distributions when trading for furs. The British no longer saw the practice as necessary because they had gained a monopoly in the fur trade and generally regarded the practice of “gift” distribution as bribery. The aboriginal peoples saw the gift-giving ceremonies differently.  They regarded them as a renewal of the alliance between the two nations—the British and the particular Aboriginal nation in question—- and the price by which the First Nations allowed the British to use their lands.  Also, the First Nations had come to rely on the guns and ammunition which formed part of these trading sessions.  In addition, although Article 40 of the capitulation of the French at Montreal guaranteed, especially Britain’s allies, protection for the lands they inhabited, Britain’s military regime and the British colonial governments along the American seaboard found this provision difficult to enforce.

In the North American theatre of war, both the British and French had been supported by aboriginal allies. With the defeat of the French, the First Nations lost their bargaining position between the two European rivals.

The First Nations saw the Seven Years’ War as a conflict between two European powers; the aboriginal peoples only fought as allies of either the English or French. They had not been conquered; this was their land and they had allowed Europeans to come and settle under certain conditions, such as gift distribution.  Discontent began to grow.  In response, a British plan to control the European traders by restricting trade to posts and to eliminate rum failed. Into this troubled situation stepped a remarkable native leader, Pontiac, an Ottawa chief.    Although this charismatic leader had fought for the French, he quickly moved to establish good relations with the British after the fall of Montreal.  When British promises did not materialize, localized Aboriginal uprisings occurred which Pontiac exploited and unified into a native revolt in the summer of 1762, which gave First Nations control of most of the Old Northwest.

Long before these uprisings, the British had recognized the pressures on the land west of their colonies along the Atlantic coast.  The British moved to correct the situation with a series of proclamations.  The first issued in 1761 focused on several British colonies along the east coast of North America, including Nova Scotia. There were to be no sales of Amerindian lands without official authorization and settlers unlawfully established on Indians’ lands were to be evicted.  When complaints came from First Nations that this proclamation was not being accepted, the substance of the proclamation and a clarification was issued in 1762, only to become a dead letter quickly.  Then, the British King issued The Royal Proclamation of 1763.
The Proclamation, which followed eight months after the Peace of Paris settlement ended the Seven Years’ War, was an attempt to provide a provisional arrangement to resolve aboriginal matters, but also to provide a civil administration for the newly acquired territory of New France. In the peace negotiations at Paris, Britain obtained Florida from the Spanish, and all of New France from the French, except for the islands of St. Pierre and Miquelon.  West of the Mississippi remained in Spanish hands.  Under the Proclamation, Britain attempted to redress the First Nations’ grievances by reducing the former boundaries of New France and creating a small province of Quebec straddling the St. Lawrence River. All the remaining territory was closed to European settlers by designating it as “Indian territory”.  This newly created territory would protect her Indian allies from European encroachment.

The British government hoped to enforce this Proclamation policy with military posts on the interior boundary line, dividing the white settlers from the native peoples on a north-south axis.  This was impractical since there were already white settlers in the interior and the military posts had no financial support once the Stamp Act had been repealed.  Thus, the whole interior policy was thrown out in 1768.  The British simply had no money or resolve to send the military into the area to protect the aboriginal peoples from determined white settlers moving into the “Indian territory” rather than going north to settle in the new province of Quebec or Nova Scotia.

Under the Proclamation, Britain attempted to redress the First Nations’ grievances by reducing the former boundaries of New France and creating a small province of Quebec straddling the St. Lawrence River.

Although these questions have not been definitively resolved, court cases have begun to clarify some of the issues surrounding Aboriginal land claims.  The first significant court case following Confederation involving aboriginal rights was St. Catherine’s Milling v. The Queen in 1888.  The Judicial Committee of the Privy Council upheld the Supreme Court of Canada’s decision that aboriginal title over land was granted by the Crown through the Royal Proclamation.  In effect, Amerindians had no legal ownership to the land but could treat with the Crown for the extinction of their right of occupancy.  The logical consequence of this decision was that if First Nations refused the Crown’s wishes in securing land, the federal government could go ahead with settlement and displace the aboriginals if necessary. The Privy Council did not accept the view that the Royal Proclamation had been superseded by the Quebec Act of 1774; rather, the legality of the Proclamation was upheld and all the rights Amerindians possessed stemmed from the Royal Proclamation.

…significant parts of the Royal Proclamation of 1763 are as alive today as they were 250 years ago.

In more recent times, the courts have been more nuanced with respect to the issue of Aboriginal title although they accept the Crown’s underlying title as a given.  For example, in Calder v. Attorney General (of British Columbia) in 1973, the Supreme Court of Canada ruled that Aboriginal title might have existed before contact, but had been overruled by white man’s laws. Where Aboriginal rights existed, they were dependent upon the goodwill of the Sovereign. Then, in the 1984 case of Guerin v. The Queen, the Court went further and acknowledged the pre-existence of Aboriginal rights before colonization and their survival afterward.  The Guerin case recognized the federal government’s fiduciary responsibility towards Amerindians, a direct consequence of the Crown reserving to itself the right to acquire Amerindian lands in the Royal Proclamation of 1763. In that role, the government thus assumed responsibility to always act in the best interest of the Indians.

The Delgamuukw v. British Columbia case in 1997 was the most comprehensive decision about Aboriginal title in the twentieth century. The lower courts in British Columbia had ruled in 1991 that the discovery and occupation of the lands of this continent by European nations gave rise to the right of sovereignty.  The Supreme Court of Canada overturned this decision and ruled that the case should be retried since oral tradition had not been given sufficient weight. In response to this decision, which left in limbo the question whether Aboriginal title still existed, the federal government developed its comprehensive claims process to extinguish Aboriginal title in exchange for rights and benefits clearly outlined in such settlements.

Although there is more clarity with respect to Aboriginal title, the Nisga’a Final Agreement Act (Nisga’a treaty) of 2000 demonstrates that consensus has not yet been achieved.  This treaty has met with strong opposition from both within and outside the First Nations’ community.  Thus, the Royal Proclamation of 1763, a policy designed to bring peace and order to Britain’s North American territories, is still a document which is very controversial and alive in Canadian judicial and political circles today.

Kenneth Munro is a Professor Emeritus at the University of Alberta.