A Website of The Centre for Public Legal Education Alberta
You are here: Home / Special Report / 26-5: Law and Change / The Rule of Law: What is it? Why should we care?
Reading Time: 10 minutes 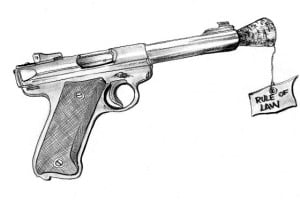 Living in a society where one day, while you are safely and reasonably driving your new car down the street, you are pulled over and arrested solely because the arresting police officer doesn’t like the colour of your car. After being released from jail, you paint your car another colour and then are pulled over and arrested again because a different police officer doesn’t like the new colour of your car.

Living in a society where the government prohibits murder but refuses to arrest or prosecute a high-ranking government official who intentionally shoots and kills an innocent person for no discernible reason in front of several eye-witnesses.

Living in a society where, at any moment, without any warning and without following any particular procedure, the government could seize your home, your children, or your bank account.

As residents of a western democracy, we instinctively know that the type of society depicted in any one of the above examples is unacceptable. There is something inherently wrong with a legal system that would allow a citizen to be arrested solely on the whim of a police officer or that would not apply the law to the law-makers or that would not require the government to follow predictable and established procedures before drastically impacting the lives of citizens. So, the need to reject the legal systems depicted in the examples seems obvious to us. But what exactly is it about the above examples, which enables us to so quickly and certainly reject the societies depicted? What is the common feature of each example that makes the society pictured so intrinsically abhorrent? What is the essential feature of our democratic society which is absent in each of the examples? The answer to all of these questions– the reason that we are instinctively able and compelled to denounce the societies illustrated in the examples — is that each of the examples depicts a society operating without the Rule of Law.

What is the Rule of Law?

Thousands of books and articles have been written by people in various fields of study or enterprise, all trying to capture in words the essence of the Rule of Law. Some of the most concise, comprehensive, and understandable descriptions of this principle, however, have come from the Supreme Court of Canada. While recognizing that the Rule of Law is “a highly textured expression, importing many things”, the Supreme Court of Canada has generally summarized the Rule of Law as “conveying a sense of orderliness, of subjection to known legal rules and of executive accountability to legal authority” (Reference re Resolution to Amend the Constitution, 1981). The Supreme Court has also said that “at its most basic level, the rule of law vouchsafes to the citizens and residents of the country a stable, predictable and ordered society in which to conduct their affairs. It provides a shield for individuals from arbitrary state action” (Reference re Secession of Quebec, 1998).

Following generally on Dicey’s comments, the Supreme Court of Canada has identified the following three elements as part of the Rule of Law:

The Supreme Court has also held that the Rule of Law “must mean at least two things. First, that the law is supreme over officials of the government as well as private individuals, and thereby preclusive of the influence of arbitrary power” and that “the rule of law requires the creation and maintenance of an actual order of positive laws which preserves and embodies … order” (Reference re Manitoba Language Rights).

In essence, the Supreme Court’s descriptions of the Rule of Law say that this principle requires society to be governed by discernible laws, rather than by personal whims and preferences. Instead of society being ruled by the desires or interests of a particular person or group, which desires and interests may fluctuate daily, society should be ruled by law. Among other things, a society that is ruled by law must have procedures in place for ensuring that people in positions of power are not able to arbitrarily manipulate social order. So, laws must be created only in accordance with established and agreed upon procedures; laws cannot be created arbitrarily and without warning to the public. Laws must be equally applied to both the law-makers and ordinary citizens.

Laws must be applied in predictable and established fashions, rather than depending solely on the whims of the law-makers or law-enforcers. In other words, the Rule of Law calls for the application of objective standards in the creation and application of a society’s laws.

What the Rule of Law is Not

In hearing that the Rule of Law is a principle that mandates objectivity in our legal system, many people argue that this principle is not followed in our country because the law, in fact, frequently applies differently to different people. For example, one person charged with murder might be given a penalty that is completely different than another person charged with the same crime. Similarly, one person injured in a car accident might be awarded far more compensation than another person who has suffered similar injuries. A police officer may issue a speeding ticket to one driver, but not to another driver who committed the same offence.

The Rule of Law, however, does not necessarily require that all people be treated identically. Instead, the Rule of Law simply requires that the law give the same considerations or apply the same standards to persons in similar circumstances.

The result of the application of those considerations or standards may differ significantly depending on the case. So, two people who have committed murder may receive different penalties if one person is a serial killer and the other is not. Similarly, a person injured in a car accident may receive more compensation than another person who suffered similar injuries if the first individual was blameless in the accident and the second individual somehow contributed to the accident. A police officer can properly decide to issue a warning rather than a ticket to one speeder and to issue a ticket to another speeder if the officer has reasonable grounds to think that the first speeder only needs a warning as a deterrent and the second speeder needs a ticket to learn his lesson. In all of these circumstances, however, the Rule of Law remains at play because the difference in treatment depends on established criteria and not on the whims of the person administering the system.

Why We Should Care About the Rule of Law

Although these decisions were made years apart, both cases demonstrate the importance which Canadian courts place on the Rule of Law and the essential service the courts provide in ensuring that our law-makers respect this Rule.

The Supreme Court of Canada found that Premier Duplessis’ actions were unjustified and the Court ordered the Premier to pay damages (compensation) to Roncarelli. The Supreme Court held that Premier Duplessis’ cancellation of Roncarelli’s liquor licence violated the Rule of Law because this action constituted an abuse of the Premier’s powerful position. The Court held that the Rule of Law prohibited Duplessis from relying on his high office or his personal assessment of public interest as a ground for cancelling Roncarelli’s liquor licence. The liquor licence could only properly be revoked if the cancellation was authorized by a particular statute or law. The Quebec statute which dealt with liquor licensing gave the power to issue or cancel liquor licences exclusively to another Quebec official and not to the Premier.

In Reference re Secession of Quebec, the Canadian government asked the Supreme Court of Canada to provide an opinion on the right of Quebec to unilaterally secede from Canada. This issue arose because of the stated intention of the Quebec government to declare Quebec to be an independent nation, regardless of any objection by the other Canadian provinces or the federal government, if Quebec citizens voted in favour of independence in a provincial referendum. In deciding this question, the Supreme Court of Canada was compelled to consider the fundamental aspects of Canada’s constitutional order – that is, the basic values and nature underlying this country’s political, legal, and social structures. The Court expressly included the Rule of Law among the fundamental features of our society and, as already noted, defined the Rule of Law as including various features but basically representing the notion that “all government action must comply with the law.” The Court stated that the Rule of Law is closely linked to the principle of constitutionality, which requires that “all government action comply with the Constitution”. So, the Court ultimately concluded that, because of the Rule of Law and the notion of constitutionality, the province of Quebec could only legally act in accordance with the Constitution. For other reasons which are too detailed to consider in this article, the Court then found that the Constitution does not permit Quebec to secede from Canada without negotiating the terms of that secession with the other Canadian provinces and the federal government.

The Roncarelli case and the Quebec Secession Reference case are useful in pointing out a number of facts regarding the significance of the Rule of Law:

First, the circumstances which brought each of these cases before the Court demonstrate that, although Canadian citizens and the federal and provincial governments might instinctively recognize and acknowledge components of the Rule of Law as being fundamental to our democratic society, sometimes individuals or governments take action which, either intentionally or unintentionally, may violate the Rule of Law. In attempting to achieve other goals, it is particularly easy for elected officials or governments to overlook or misinterpret their obligations under the Rule of Law. Accordingly, we cannot be complacent and simply assume that because Canadian citizens and governments value the Rule of Law that Rule will necessarily be followed without the involvement of the courts in enforcing it.

Finally, by demonstrating the willingness of the courts to use the Rule of Law to curtail government action, these cases capture the essence of the Rule of Law – the notion that all participants in our society, governments included, must adhere to the laws and procedures we have agreed upon.

In our day to day lives, we often bemoan the fact that we must follow rules. We frequently find society’s laws to be too restrictive and rigid, not being flexible enough to take our individual needs and circumstances into account. In understanding the idea of the Rule of Law, however, we see that the rules, while frequently inconvenient, in fact save us from the intolerable inconvenience that a social order without objective rules would inevitably provide. This is not to say that all of our current laws or rules are perfect, but the existence of these objective rules ultimately protects our freedom. While many people in the world still struggle against the oppression of a tyrannical ruler, we are free from oppression at least in part because we are ruled by law.