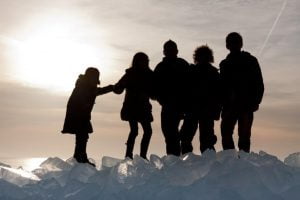 An Act of Visibility

When a forgotten story in history is acknowledged, the people surrounding that story become more visible. Justice Edward Belobaba’s recent ruling in favour of Ontario’s Sixties Scoop survivors marks an historical act of visibility where Canada’s dark colonial history is recognized as being one with many chapters and secrets. It is a case that calls attention to the scope of Canada’s cultural assimilation of Aboriginal identity during the 20th century, and shows that the residential school system represents a visible part of an iceberg with a mass of history still submerged. Stephen Harper’s formal apology in June 2008 brought the hidden chapter of Canada’s residential school system into the public eye, but as Canadians, we cannot think the history or the chapter ends there.

Ontario’s Sixties Scoop ruling brings the discussion of a nation’s obligation and duty to protect its Aboriginal peoples’ cultural identity, out into the open. In an interview with Muskrat magazine, J’net Cavanagh, a Sixties Scoop survivor from the Ahousaht First Nations on the West Coast of Vancouver Island, remarks that Stephen Harper’s formal apology was a huge moment of recognition and visibility for Canada’s Aboriginal peoples, but she feels “the apology stopped short in acknowledging the aftermath of residential schools—as they phased them out, adoption and foster care went through the roof.” She highlights the importance of understanding the residential school’s inter-generational impact. The residential school’s complex repercussions cannot be omitted from Canadian history, or be forgotten in Canadian conversation. We cannot think the racist and colonial attitudes that founded the residential schools were isolated to a specific part of the governmental system. These attitudes dispersed through many governmental programs, such as child welfare.

What is the “Sixties” Scoop?

Patrick Johnson, a researcher for the Canadian Council on Social Development, coined the term “Sixties Scoop” in a 1983 report that explored the mass apprehension of Aboriginal children from their homes and reserves and into Canadian and American child welfare systems during the 1960s. Johnson took the phrase from the comments of a provincial child-protection worker who noted that social workers “would literally scoop children from reserves on the slightest pretext.” This “scooping” dramatically accelerated the over-representation of Aboriginal children in welfare systems. The children were removed with no consultation with the child’s family or band and subsequently placed in non-Aboriginal adoptive and foster homes. These non-Aboriginal families Canadian law at the time clearly accepted that Canada’s care and welfare of its Aboriginal peoples was a “political trust of the highest obligation.” were never given any information from the government on the child’s Aboriginal heritage, their legal Indian status, or the various benefits the child was entitled to receive. Siblings were also usually sent in radically different directions. The children were fundamentally denied a sense of well-being as they lost contact with their families, lost contact with their culture, lost their traditional language, and lost any sense of identity. This traumatic loss deeply impacted the childrens’ ability to lead a healthy and fulfilling life. The traumatic loss of Aboriginal identity during the Sixties Scoop resulted in countless cases of suicide, unemployment, substance abuse, and mental disorders.

The Ontario Sixties Scoop case is one of many lawsuits of its kind across the country, but it is the first to see any success. Unlike the comprehensive Indian Residential Schools Settlement Agreement (IRSSA), which was implemented by the government in September 2007 and remains the largest class action settlement in Canadian history, Sixties Scoop lawsuits remain stuck in the deathly pipeline of legal litigation facing strong governmental resistance (Ontario’s Sixties Scoop is no exception as the case was bitterly fought and litigated for eight years). Jeffery Wilson, the lead plaintiff lawyer for Ontario’s case, has commented widely on the government’s refusal to negotiate or make a proposal for resolution. There have been numerous attempts by the government to dismiss the case completely. Days before the ruling, the government requested that Justice Belobaba hold off the release of his judgment.

Canada’s other main submission was the argument that “things were different back then,” and given the knowledge at the time, it was not foreseeable that trans-racial foster and adoptive placements would cause such great harm.Chief Marcia Brown Martel, a member of the Temagami First Nations near Kirkland Lake Ontario, led the class-action lawsuit on behalf of approximately 16,000 Aboriginal children who were placed in non-Aboriginal adoptive and/or foster homes in Ontario between 1965 and 1983, and suffered the loss of their cultural identity. The lawsuit sought $1.3 billion in damages and is still in the process of being assessed. The case specifically addresses the post-placement period where the class members suffered harm due to Canada’s failure to take reasonable steps in preventing the loss of their Aboriginal identity. The big issue before the court is “whether Canada can be found liable in law for the class members’ loss of Aboriginal identity after they were placed in non-Aboriginal foster and adoptive homes.”

The Ontario Sixties Scoop case is distinctive from other Sixties Scoops lawsuits in that it focuses on the post-placement period rather than the actual placement or removal itself. It is also distinctive in that Ontario is the only province that entered a federal-provincial funding agreement (the Canadian-Ontario Welfare Services Agreement, or the 1965 Agreement).

Discussions at the 1963 Federal-Provincial Conference provided reasoning for the creation of the 1965 Agreement. It was agreed that Aboriginal communities should have the full range of provincial programs and services available to them, but that these services should never be forced upon an Aboriginal community against their wishes, as this would be “a serious breach of faith.” The funding agreement allowed Ontario to extend the delivery of its existing child welfare to the reserves, and also outlined Canada’s obligation to consult with Aboriginal bands about the extension of welfare programs in their communities.

The core of Justice Belobaba’s judgment rests on the terms of the 1965 Agreement, and specifically the obligation to consult outlined in section 2(2), which clearly states:

No provincial welfare program shall be extended to any Indian Band in the Province unless that Band has been consulted by Canada or jointly by Canada and by Ontario and has signified its concurrence.

The insurmountable evidence put forth by Chief Marcia Brown Martel (the representative plaintiff) revealed that “the full reach of the provincial child welfare regime was extended to all of the reserves without any consultation and concurrence on the part of any Indian Band.” In turn, Canada failed to consult, and explicitly breached this section of the 1965 Agreement.

The Ontario Sixties Scoop case is distinctive from other Sixties Scoops lawsuits in that it focuses on the post-placement period rather than the actual placement or removal itself.One of Canada’s main submissions was the argument that even if proper consultation with Aboriginal bands occurred, there was no evidence that the bands would have provided any ideas that could have prevented the loss of Aboriginal identity. In other words, would life really have been different had they been consulted? Justice Belobaba calls this an “insulting submission.”

This submission was met with the uncontroverted evidence that had the Aboriginal bands been consulted they would have strongly suggested:

Canada’s other main submission was the argument that “things were different back then,” and given the knowledge at the time, it was not foreseeable that trans-racial foster and adoptive placements would cause such great harm. Justice Belobaba shows that Canada’s submission completely misses the point. The “existential importance” of the protection and preservation of indigenous identity was very well known at the time, and the actual matter of trans-racial placements is irrelevant. Canada’s understanding of the importance of protecting and preserving indigenous identity explains why section 2(2) was added to the 1965 Agreement in the first place.

Patrick Johnson, a researcher for the Canadian Council on Social Development, coined the term “Sixties Scoop” in a 1983 report that explored the mass apprehension of Aboriginal children from their homes and reserves and into Canadian and American child welfare systems during the 1960s. Furthermore, until the publication of a federal informational booklet in 1980, the government made no effort to provide any information to non-Aboriginal foster families on the child’s heritage and status, as well as various federal benefits and entitlements available to them. Although the federal booklet was published in 1980 (which is technically still during the case’s period), there is no evidence that the booklets were ever received by Child Aid Service workers and distributed. The information was also only meant for adoptive parents (not foster parents). Justice Belobaba concludes that if Canada had honoured its obligation to consult under section 2(2), this information would have been provided years sooner and probably to both foster and adoptive parents.

Looking to the Future

Ontario’s Sixties Scoop ruling brings the discussion of a nation’s obligation and duty to protect its Aboriginal peoples’ cultural identity out into the open. As Chief Marcia Brown Martel stated at the Sixties Scoop decision announcement “we can sit here, and stand here today knowing that our Canadian way is a better way than it was yesterday.” The ruling is a powerful step towards bringing historical visibility to Canada’s inter-generational actions of cultural assimilation of its Aboriginal peoples. It is a step in the long journey of reconciliation.

Stephen Harper’s formal apology in June 2008 brought the hidden chapter of Canada’s residential school system into the public eye, but as Canadians, we cannot think the history or the chapter ends there.

Rachel Shabalin is a writer residing in Calgary, Alberta. She has a B.A. with Honours in English from the University of Calgary.