You are here: Home / Feature Articles / 39-6: The Top Court / Top Courts in the U.S. and Canada: A Comparison
Reading Time: 4 minutes 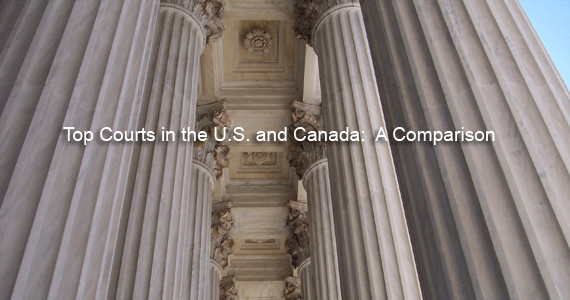 Knowledge of Canada or the United States is the best way to gain insight into the other North American country.  Nations can be understood only in comparative perspective.  And the more similar the units being compared, the more possible it should be to isolate the factors responsible for differences between them.  Looking intensively at Canada and the United States sheds lights on both of them.  – Seymour Martin Lipset, Continental Divide: The Values and Institutions of the United States and Canada

The judges of the Supreme Courts of Canada and the United States are frequently in the news and national policy discussions.  Yet, these nine individuals, unlike prominent politicians, are not well known by the people they serve in each country.  While the courthouses in which they toil are magnets for tourists, most people would be hard pressed to name a Supreme Court judge, much less recognize one if they were standing next to one.  The story is told of a family visiting the U.S. Supreme Court in Washington, D.C. stopping and asking someone to take their picture. It turns out that while there is gender and ethnic diversity, the justices of the U.S. Supreme Court emerge from a virtually identical educational and geographical background. After the photo had been taken on the sprawling plaza with the court building in the background, they politely parted without the family having any idea their casual photographer was Justice Anthony Kennedy.

These top judges are known more for what they do through their decisions than who they are.  However, that is changing as they are engaged in rejecting and enacting ultimate social and legal policy in their countries.  The U.S. Supreme Court has recently delivered rulings on the constitutionality of same-sex marriage and funding for the new national Affordable Care Act (Obamacare).

We are increasingly asking about these judges – unelected, appointed and on the bench for a long time – who they are as human beings. …while Canada and the United States share generally similar histories, legal systems and social composition, their respective Supreme Courts reflect their cultural and political differences. It turns out that while there is gender and ethnic diversity, the justices of the U.S. Supreme Court emerge from a virtually identical educational and geographical background.  In a recent article in The Atlantic magazine, Akhil Reed Amar panned the peas-in-a-pod sameness of their professional backgrounds.  All nine graduated from elite colleges and law schools.  All but one (Stanford) were from the east coast and all went to law school at Harvard or Yale.  Almost all were former members of U.S. courts of appeal.  Only one had trial experience.  None were in politics and only one held a high position in government.  Eight grew up a large metropolitan area, including four who were raised around New York City.

The judges on the Supreme Court of Canada have a slightly broader spectrum of personal background, much of that owing to traditions and the structural framework of how they are appointed. Canada has no experience with the election of judges, and only recently experimented with public hearings for appointments to the Supreme Court. On the other hand, while Canada and the United States share generally similar histories, legal systems and social composition, their respective Supreme Courts reflect their cultural and political differences.  For example, it is inconceivable that the U.S. Supreme Court would rule a judge who had gone through the regular appointment channels was still ineligible to sit as a judge, as the Supreme Court of Canada recently decided: Reference re Supreme Court Act, ss. 5 and 6 [2014] 1 SCR 433.

This article, in the form of a table (PDF) for easy comparison, displays the contrasts between the Supreme Courts of the United States and Canada.

“I, ………., do solemnly and sincerely promise and swear that I will duly and faithfully, and to the best of my skill and knowledge, execute the powers and trusts reposed in me as Chief Justice (or as one of the judges) of the Supreme Court of Canada. So help me God.”   – Canada Supreme Court Judges’ Oath (SCA, s. 10)

All superior court judges (about half of all judges) in Canada are federally appointed.  The other judges are appointed, by provincial governments.  Canada has no experience with the election of judges, and only recently experimented with public hearings for appointments to the Supreme Court.  This model has served Canada well.  Since the adoption in 1982 of the Charter of Rights and Freedoms, and political concerns about  judicial activism, calls have been made for more transparency and input into these appointments beyond the constitutional minimum. Since some states appoint their judges, and other states elect them, the appointment versus election policy choice is best debated at the state level. Current federal voluntary, procedural reforms call for consultation, input, the creation of a short list and some public questioning of the nominated candidates.  Given the relatively recent impact of judicial review, Canada is moving toward transparency, if not politicization and Americanization of this process.

In the U.S., by far most judges are selected by the individual state, whether by election or executive appointment within the state.  There are about 35,000 state judges compared to only 1000 federal judges).  Since some states appoint their judges, and other states elect them, the appointment versus election policy choice is best debated at the state level.

The U.S. Supreme Court justice selection process was deliberately inserted into the political inter-branch process when the U.S. Constitution was drafted.  Did the framers intend the Senate’s “advice and consent’ role to serve as a veto?  As Canada moves toward more public scrutiny of Supreme Court appointments, the process will invariably become more political.

Jacqueline Bowal is a student at the University of Calgary.