You are here: Home / Sections / Business / What Does a Commercial Contract Do?
Reading Time: 3 minutes 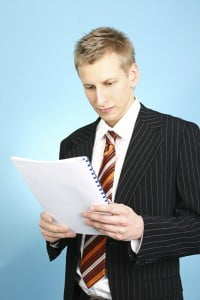 Most everyone knows that a contract — whether oral or written — is simply a legally enforceable agreement. But what, practically speaking, does a contract — and, in particular, a commercial contract — actually do?

A commercial contract does three important things in the eyes of the law:

Determines Your Rights and Obligations

By the same token, a contract is also capable of changing or completely revoking the rights and obligations that a person might otherwise have under the law. For example, by disclaiming any warranty in a contract for the sale of a good, the seller of that good can contract out of the implied warranties contained in sale of goods legislation.

For those reasons, no contract should ever be taken lightly. It is important that you read your contracts thoroughly to ensure that they do not take anything from you which you do not want taken from you and that they give you everything you want or require.

A contract is also a means of allocating risk among the parties to it. Say, for example, you build garden fences for a living. You contract with a nail supplier to purchase a certain quantity of nails so that you can build a fence for Mrs. Hannessen.

Who should bear the risk of loss if the nails aren’t delivered to you?

What if the nails are delivered, but three months after you needed them?

What if the nails are of such a poor quality that they can’t hold the wood together?

It is one of the purposes of any contract you enter into to try to anticipate these contingencies and address them in advance in the contract. In part, that means knowing what can go wrong and who is responsible to fix it when something does go wrong. In that way, you are able to determine precisely the risks of loss you are going to bear in the event something goes wrong.

Provides a Legal Basis for Restitution

A contract, as noted, is a legally enforceable agreement. That means every contract has the weight of the law behind it. Thus, if someone fails to abide by one of their contractual obligations — that is, if he or she breaches an obligation — that breach can give rise to a legal claim for restitution by any party to the contract who has suffered a loss as a result of the breach.

So, for example, if you are a party to a contract with a nail supplier to supply you with a certain quantity of nails and your contract stipulates that the nails are to be delivered to you by a certain date, then if the nails are not delivered by that date, not only do you have a moral right to complain to the nail supplier about the inadequacy of its business practices but you also have a legal right to receive restitution for the losses you suffer as a result of the nail supplier’s actions. That right arises as a matter of law and can be enforced by the law so that you — as the non-breaching party — are put in the same position as you would have been had the contract been properly carried out.

It is one thing to enter into a contract. It is quite another to know what it means to do so. Before you sign on the dotted line — whether on behalf of yourself or your business — be sure to bear the above issues in mind and consider how, in each case, they can affect what you are binding yourself (and the other parties to the contract) to do.

Nishan Swais is a lawyer with the firm of Miller Thomson in Toronto, Ontario.