You are here: Home / Sections / Famous Cases / What ever happened to … The Law of Sniffer Dog Searches: Part 2
Reading Time: 6 minutes

Introduction: The Flux of Law

This article illustrates how quickly and remarkably the common law can adjust when judicial principles change and when new judges are appointed to the Supreme Court of Canada.

The common law is generally intended to endure.  Judges describe what they do as not making the law as much as declaring what the law has always been.  They see themselves in terms of Lady Justice – as neutral experts loyal to principle and reason, unencumbered by personal ideologies and biases.

Judges will adapt the common law to reflect social change over time.  However, occasionally, a radical change in the law can be traced to nothing more than a shift in thinking or putting new judges on the Supreme Court of Canada.  To illustrate, we profile the abrupt five-year change to sniffer dog law.

In the last “Whatever Happened to . . .” column in LawNow, we highlighted the Kang-Brown, [2008] 1 SCR 456 decision from the Supreme Court of Canada.  At the Calgary Greyhound bus terminal, a trained sniffer dog detected a large quantity of illegal drugs in Kang-Brown’s bag.

According to the law, a dog conducts a search when it sniffs.  Since the dog is an extension of the police who are state agents, the legal and factual groundwork for the sniff search must exist before any illegal things discovered can be used in evidence at a criminal trial.

One judge in the top court said police who form a generalized suspicion that one is in possession of illegal drugs can use sniffer dogs to search.  This standard would have encompassed the suspicious eye contact with Kang-Brown.  Four judges declared a more onerous reasonable suspicion to apply.  The other four judges upheld the existing even higher standard of reasonable and probable grounds.  These last four judges said sniffer dog searches are illegal unless a statute authorizes them.   In the end, six of the nine judges said this sniff search was unconstitutional and none of the illegal drugs possessed by Kang-Brown could be used as evidence against him.  He was not guilty. Note that Kang-Brown was decided at the same time as R. v. A.M., 2008 SCC 19 (CanLII) by the identical Court with the same outcome.  In A.M., sniffer dog detection of drugs in a student’s backpack in the gymnasium was ruled an unconstitutional search.

The following illustration shows how these standards relate to the extent  of freedom from unreasonable search.

Sniffer dog detections have been used by law enforcement for a long time and are highly reliable, low tech, non-invasive and low cost.  One would think their legality (or illegality) should be a simple, well established issue by now.  Police need to know whether the evidence will be admissible in court.  It is the difference between guilt and innocent for the accused.

The Supreme Court’s Kang-Brown decision in 2008 confirmed that sniffer dog searches are permitted only after police have reasonable and probable grounds to believe someone is bearing illegal drugs.

The Supreme Court of Canada saw a turnover of four judges between 2008 and 2013. Justices Binnie, Bastarache, Deschamps and Charron had retired. The Supreme Court’s unanimous blessing of the sniff search in Chehil  lies at odds to Kang-Brown only five years earlier in the same Court. Justices Cromwell, Moldaver, Karakatsanis and Wagner had joined the Court to replace them. The 2013 Court, with the four new judges, abandoned the Kang-Brown precedent in favour of the lower standard of reasonable suspicion (R. v. Chehil (2013), SCC 49; R. v. MacKenzie (2013), SCC 50).

In what serves as the binding majority judgment in the earlier case, three judges (LeBel, Fish and Abella) had stated authoritatively in Kang-Brown (para.1):

[We] would not lower the threshold for the exercise of police powers to one of “reasonable suspicion” since to do so would impair the important safeguards found in s. 8 of the Charter against unjustified state intrusion. [We] would apply the existing and well-established standard of “reasonable and probable grounds” to hold that the search did not meet this standard.

They feared the “the Court would create a new common law rule on the basis of little more than unverified and…unverifiable assumptions” and further that “a downgrading of the standard of reasonable and probable cause to a standard of reasonable suspicion…might lead to an even looser test of generalized suspicion.”  They also said there was no legal authority for sniffer dog searches.

Nevertheless, five years later in Chehil and MacKenzie they signed on, without comment, to the now-unanimous reasonable suspicion standard.  Legal authority for such searches – nonexistent in 2008 – was apparently by now assumed by the same three judges to exist in 2013.  Only two of the five judges who decided both the 2008 and 2013 cases were consistent on this critical constitutional principle that usually represents the evidentiary difference between guilt and innocence.

The four new judges, unhobbled by the Kang-Brown precedent, all embraced the reasonable suspicion standard.  Indeed one of the new appointees to the Court (Karakatsanis) wrote the unanimous Chehil decision and in her first paragraph arguably mis-stated the Kang-Brown holding:

[1]     In R. v. Kang-Brown . . . the Court balanced the travelling public’s privacy interests against the public interest in apprehending those who transport and traffic drugs.  The Court concluded that the use of a properly deployed drug detection dog was a search that was authorized by law and reasonable on a lower threshold of “reasonable suspicion”.

The following chart illustrates the division of the Court on each standard in 2008 vs. 2013: 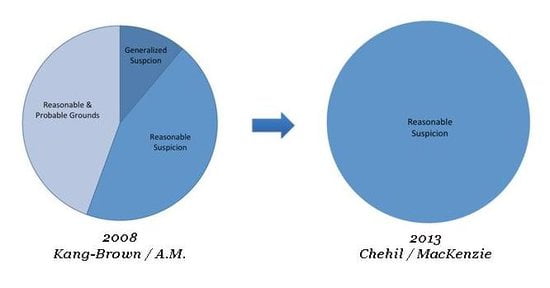 The facts in Chehil were similar to Kang-Brown.  The RCMP dispatched a sniffer dog to an airport terminal to investigate Chehil, who they found suspicious based on their interpretation of the flight passenger manifest.  What was suspicious?  Chehil was travelling alone, had only checked one bag, and bought his ticket last minute with cash (essentially how Kang-Brown had travelled).  According to the experience of the RCMP officers, these were telltale signs of a drug courier.  The sniffer dog gave a positive indication that drugs were present, Chehil was arrested, and the RCMP found three kilograms of cocaine.

The Supreme Court’s unanimous blessing of the sniff search in Chehil lies at odds to Kang-Brown only five years earlier in the same Court.  All nine justices applied the standard of reasonable suspicion, found that the officers were reasonable in their suspicion of Chehil and ruled the dog sniff a legal search.  The resulting contraband evidence was admitted at trial.  Chehil’s objections were dismissed.  Now dog sniff searches in public places are legal across Canada after a police officer is possessed of a reasonable suspicion, a significant change from five years ago.

There is no explanation for the change in the law.  Sniff searches and dogs, illegal drugs and the methods of transporting them have not undergone revolutionary social or technological change in the last five years.  The recent unanimous Chehil decision changes the decision in Kang-Brown and no explanation was thought to be necessary.

How can the Supreme Court of Canada, on a matter as important as police searches under the Charter, change the law within five years?  Part of that can be explained by four new judges on the bench.  But three judges who carried the day five years earlier also retreated from the conclusions they had held.

The common law system is not easy for most Canadians to understand, perhaps because it is not always coherent.Now dog sniff searches in public places are legal across Canada after a police officer is possessed of a reasonable suspicion, a significant change from five years ago.  These dog sniffer cases, decided by the same top court five years apart, are difficult to reconcile.

It used to be that a departure from an entrenched common law principle, especially at the venerable Supreme Court of Canada, came with an explanation that balanced doctrinal stability and the need to accommodate social change.  But, changes to the composition of the Supreme Court of Canada and  an inclination to overturn precedent can lead to rapid and dramatic change to judge-made law.

Evan Knight is a final year student at the Haskayne School of Business, University of Calgary.