A Website of The Centre for Public Legal Education Alberta
You are here: Home / Sections / Employment / Changing Terms of Employment
Reading Time: 4 minutes

Darrell Wronko started work at Western Inventory Service Limited (WIS) in 1987, right after graduating from university. He worked at the company for 17 years, including four years as Vice President of National Accounts and Marketing. In 2000, he signed an amended employment contract, which included a significant improvement to his termination clause. The new provision would give him two years of salary and bonus on termination.

In 2002 under a new corporate President, Wronko received a new contract that reduced the termination provision to 30 weeks of salary. Wronko refused to sign the new contract and continued working. WIS gave two years written notice to Wronko that the termination clause in his contract would change to a maximum of 30 weeks’ salary.

Over the next two-year period Wronko remained employed by WIS, and continued to oppose the amended contract. In 2004 Wronko was told the new termination provision of 30 weeks was in effect, and if he did not accept the new terms of employment, he no longer had a job at WIS. Wronko walked off and asked for his severance package of two years. The case went to court.

Employers may make life very difficult for employees without expressly dismissing them. They may humiliate them in public, ask for their resignations, lock them out of their workplace or suddenly demote them or transfer them to a location to which the worker does not want to move. The employer’s sudden, unilateral change of the job may be more subtle, such as significantly changing one’s job responsibilities, title, working conditions, benefit packages or restrictive covenants. If the average person would view this as an act that renders continued employment intolerable, the employee may consider himself to have been dismissed, even though dismissal language was never used. The law views this as a termination without cause and the employee is entitled to compensation for a reasonable notice period. Wronko argued that WIS constructively dismissed him in 2004 when it unilaterally varied the termination clause in his contract. He sought damages of two years’ salary.

In 2008, Wronko’s case reached the Ontario Court of Appeal (Wronko v. Western Inventory Service Ltd., 2008 ONCA 327). Did the 2004 letter (reducing the notice period) from WIS constitute a termination, and if so, what consequences flowed from the termination? The Court said a reasonable person would have regarded the concluding statement in the 2004 letter, “… then we do not have a job for you” as a WIS termination. The Wronko case was not a constructive dismissal because the unilateral change did not have an immediate change on Wronko. Rather, the 2002 notice was an anticipatory breach of contract. WIS knew Wronko was opposed to the change in severance terms and, by continuing the employment, WIS must be taken to have agreed to Wronko’s position. Therefore WIS’s unilateral change of a fundamental term of the employment contract, the termination clause in 2004 was wrongful and Wronko was entitled to two years of salary based on the existing contract. The Supreme Court of Canada refused leave to hear an appeal brought by WIS in October 2008.

The Appendix chart summarizes the possible options when an employer proposes a unilateral change to a fundamental term in an employment contract: 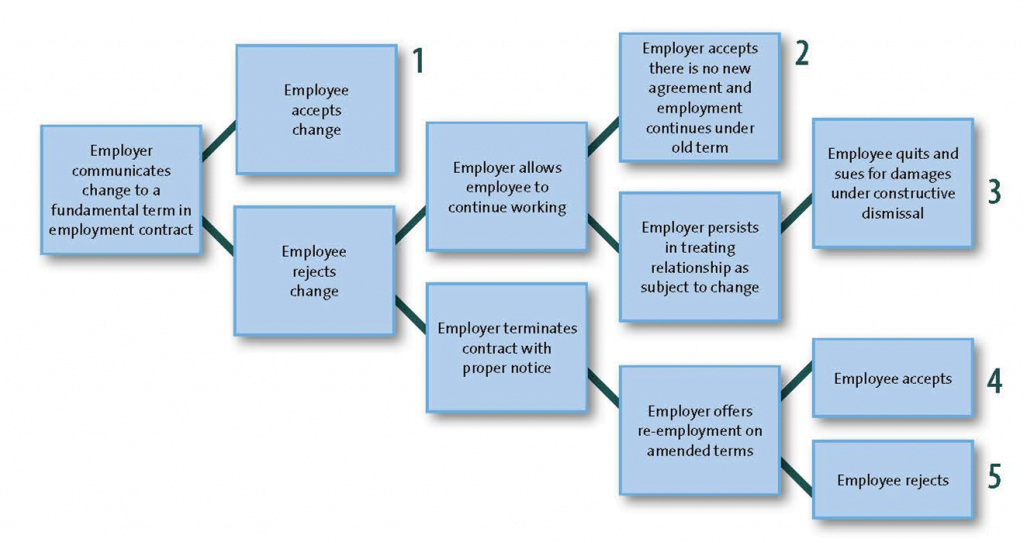 Option 2: Employer announces change and employee rejects change. Employer allows employee to continue working. Employer accepts there is no new agreement and the employee can assume employment continues under old terms. This is the conclusion in the Wronko case and the reason why the judge awarded damages. The lesson here for employers is if they want to avoid wrongful dismissal claims, when the employee rejects the contract change, the employer must provide proper notice of termination (and award any severance) rather than continuing the employment relationship.

Option 3: Employer announces changes and employee rejects change. Employer allows employee to continue working. If the employer persists in treating the contract as changed, the employee can quit and sue the employer for damages on the basis of constructive dismissal.

Options 4 and 5: Employer announces changes and employee rejects change. The employer should respond by terminating the employee with proper notice and offering re-employment on the new terms. The employee will either accept or reject the new offer.

When employers want to introduce new terms that are less favourable to the employee, the lessons from Wronko are clear. The employer must:

A final lesson is for the employee to immediately and clearly oppose the change, if the employee objects to the changes in the revised contract. Doing otherwise might be considered as an acceptance of the new terms, and the employee will have no subsequent claim to constructive dismissal or damages for breach of contract.

Colleen Hoy recently earned her MBA from the Haskayne School of Business at the University of Calgary in Calgary, Alberta.