You are here: Home / Feature Articles / 37-4: Environmental Causes and the Law / Civil Disobedience, Environmental Protest and the Rule of Law
Reading Time: 6 minutes 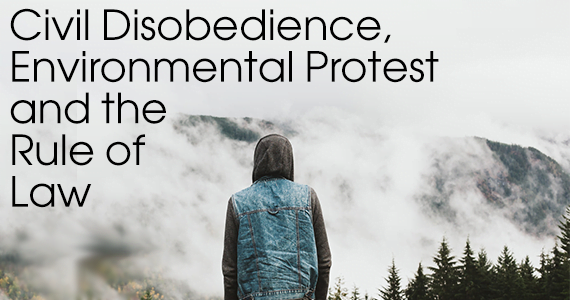 What is civil disobedience?

Civil disobedience involves intentional violation of the law to achieve a result the law-breakers believe is in the public interest. Civil disobedience is a form of protest intended to draw attention to a wrong or injustice which the protesters believe is sufficiently serious to morally justify violation of the law. In 2008 Greenpeace activists unleashed a banner at a political meeting which said “Stelmach: the best Premier oil money can buy” during a speech by then Premier Ed Stelmach. In doing so, the protesters intentionally violated several laws, including criminal trespass – they had no legal right to be at the meeting or do what they did. But in their view, their actions were morally justified because the government led by Stelmach was complicit in the environmental harm caused by oil production.

According to Roberta Lexier civil disobedience is typically defined as “a public, non-violent and conscientious breach of law undertaken with the aim of bringing about change in laws or government policies.”1 As Lexier says, the goals of civil disobedience are “to publicize an unjust law or a just cause” and “to appeal to the conscience of the public” so as “to end complicity in the injustice which flows from obedience to unjust law.” Sometimes the goals are more strategic, that is, aimed at pressuring the authorities to take a particular step towards alleviation of the injustice, for example, in Lexier’s words, “to force negotiation with recalcitrant officials.” Recent road obstructions by some Aboriginal groups as part of Idle No More were undertaken with the goal of pressuring government officials – in particular, the Prime Minister and the Governor General – to agree to meet with certain chiefs. Civil disobedience can also be aimed at disrupting the process by which people who have violated an unjust law are prosecuted, for example, by encouraging so many people to defy the law that the authorities are overwhelmed by their number. As Lexier puts it, the goal in this context is to “clog the machine.”

Sometimes the law violated in a civilly disobedient action is the very law that protesters seek to change. This was the case in an iconic instance of civil disobedience when in 1955 a young black woman, Rosa Parks, defied the Montgomery, Alabama law requiring city buses to be racially segregated by confining black passengers to the back of the bus. When she was asked to vacate her seat, in the first row of the back section, because a white man wanted to sit as close to the front of the bus as possible, she refused. Her conviction for violating the law led to a boycott of the city’s bus system and eventually to repeal of that law.

But the wrongness of a law or government policy cannot always be highlighted directly, that is, by violation of that very law or policy. Take for example, the recent legislative changes which weaken protection for Canadian waterways and are of particular concern to the Idle No More movement. Bill C-45, the 2012 omnibus bill removes many bodies of water from consideration under the Navigable Waters Protection Act. Unlike a legal command, such as “black people must sit at the back of the bus,” a law which removes statutory protection cannot itself be violated. Other means must be found, such as obstruction of roads or the occupation of government offices. The latter technique was used in 2009 when protesters sought to convince then federal environment minister, Jim Prentice, to take serious measures to counter climate change by illegally occupying his constituency office in Calgary.

Non-violence, as Lexier notes, is usually cited as a defining characteristic of civil disobedience. Some challenge this requirement. However, not only is violence probably contrary to the very concept of civil disobedience, it is also likely to prevent achievement of protesters’ goals. Thinking strategically, are ordinary people more or less likely to be inspired to demand the legal or policy change protesters believe is needed if the disobedience is violent? In stable democracies such as Canada, the U.K. and the U.S. – where mass disorder and public displays of violence are rare – the public’s response to violence is likely to be highly negative, and thus, violence is likely to hinder rather than help advance protesters’ goals. If it is important to appeal to “the conscience of the public” and to “end complicity” with injustice, then how the public is likely to react to the protest must be taken into account.

Also important is that public opinion changes over time. For example, when suffragettes broke laws to protest the fact that women did not have the right to vote, many people were horrified and denied that what protesters had done was justified in the name of achieving reform of Canadian voting laws. But of course, it was not long before the fact that women had ever been denied the right to vote seemed ludicrous, itself completely beyond the pale.

The law on civil disobedience

From one point of view, the law on civil disobedience is quite straight-forward. By definition civil disobedience involves a deliberate breaking of the law. The activists occupying the environment minister’s Calgary office had no authority to obstruct the use of that office. Such protesters, if prosecuted, will be convicted, unless a court decides the law in question is unconstitutional, which happens only rarely. The fact that the law was broken to point to a serious problem – Canada’s refusal to take significant steps to limit climate change – would not be relevant to a conviction. It is well-established in Canadian law that motive – the reason people break the law – is irrelevant to guilt or innocence.

But other legal issues about civil disobedience are more difficult. For example, when civil disobedience is non-violent and respectfully undertaken – for example, by giving the authorities advance notice of actions which will inconvenience the public – is it in the public interest that activists should be charged? What should the answer depend upon: how long the protest goes on; how many people are inconvenienced by it; whether there is damage to property as a result; or some other factor?

The history of civil disobedience shows it has been used to advance some of the most pressing public policy issues of the day – for example, the right of women to vote, desegregation of the American South and the need to end Apartheid in South Africa. When legal measures – such as petitioning, legal marches and political campaigns – have been exhausted, people convinced their cause is just may resort to violation of the law to try to move the consciences of their fellow citizens. Currently, many Canadians believe the environmental crisis is so severe they are prepared to break the law to prevent further degradation, for example, by obstructing the construction of additional pipelines, or at least to support those willing to do so.

Civil disobedience has upon occasion contributed a great deal to improving the human condition. It will do so again.

Civil disobedience and the rule of law

Part of what makes Canada a better place to live than many other countries is that Canadians have a relatively strong commitment to the rule of law. Disputes in the public realm – for example, whether houses will be torn down to make room for a new transit line or highway – are settled with reference to publicly agreed upon laws made by democratically elected representatives. Many disputes in the private realm – for example, which parent gets custody of the children upon divorce – are also subject to decision according to law.

A recognition that civil disobedience can play a healthy role in Canadian society does not undermine the rule of law. Quite the reverse, actually. For the citizens of a country to respect law, their legal and governmental systems must, on the whole, seem legitimate to them. When a law is so offensive to the conscience of a significant number of people that they are willing to engage in or support the breaking of that law, then society as a whole is put on notice that change may well be needed.

Our legal and governmental systems are not perfect, and they never will be. But where imperfections are serious, it is right – not wrong – to take a stand against them. A conscientious citizen should not abide by a law or policy that is profoundly unjust. Civil disobedience can strengthen the rule of law by leading to the correction of unjust or seriously wrong laws before disrespect for the system as a whole has a chance to take hold.

1. See Roberta Lexier’s presentation: “What is civil disobedience? How has it be used historically? which was presented in 2012 at events organized by the Sheldon Chumir Foundation for Ethics in Leadership.

Janet Keeping is Rule of Law Fellow at the Sheldon Chumir Foundation for Ethics in Leadership in Calgary, Alberta.