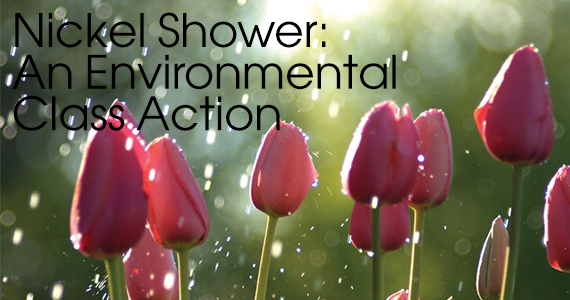 The recent Smith v. Inco Limited case is the first Canadian environmental class action lawsuit to proceed through a trial and appeal. It shows how the courts mediate between the interests of industry and of private landowners.

Inco refined nickel near the small southern Ontario city of Port Colborne on the north shore of Lake Erie from 1918 to 1984. It was for many years the major employer in the area, employing as many as 2,000 people. Inco emitted nickel oxide into the air from its 500-foot smoke stack, mostly before 1960. Inco acknowledged it was the source of the nickel particulates found in the residents’ soil. In March 2001, approximately 7,040 residents brought a class action to recover damages from Inco for what they perceived was a decline in their real estate values attributed to Inco’s earlier nickel refining operations.

On July 6, 2010, a trial judge determined that Inco must pay $36 million to the landowners.

The plaintiff class was divided into three subclasses according to their proximity to the Inco refinery, which was reflected in the degree of nickel contamination. The Ontario Ministry of Environment (MOE) conducted five soil analyses from 1972 to 1998. The last test, not publicly released until 2000, showed that in many parts of Port Colborne the level of nickel in the soil far exceeded the MOE guideline. The final draft of the Human Health Risk Assessment in 2002 ordered Inco to remediate the most contaminated properties although the MOE also reported it was unlikely the nickel levels posed any risks to human health.

The class action could not prove adverse health effects suffered by any class members. Instead, it was certified on the basis of the decline of property values only. The three related intentional tort causes of action were trespass, Rylands v. Fletcher, (strict liability) (1866), L.R. 1 Ex. 265, aff’d (1868), L.R. 3 H.L. 330) and nuisance.

The tort of trespass relates to any voluntary direct physical intrusion onto plaintiff land. Was the Inco discharge of nickel particulates that accumulated on plaintiff land a “direct and physical intrusion” or merely indirect or consequential? The residents could not prevent the contamination, but Justice Henderson concluded that this was not a trespass by Inco against these landowners: “the intrusion onto neighbouring properties in this case is indirect, not direct”.

What about the 1868 Rylands v. Fletcher doctrine? If the Inco refinery was a “non-natural use” of its land, it may be strictly liable to the residents.

In the 1989 Supreme Court of Canada case of Tock v. St. John’s Metropolitan Area Board, the basement of the Tock home was flooded following a heavy rain due to blockage in the storm sewer. The Court considered the provisioning of an indispensable service such as a water and sewer system as a natural use.

Justice Henderson distinguished his Inco case from the Tock case on the basis that an urban sewer system was “necessary to support urban life” but a nickel refinery was a “private, for-profit, corporation.” He continued:

There is debate about whether a Rylands claim is restricted to a single, isolated escape, or whether it includes ongoing escape. Inco argued that a Rylands claim should be restricted to isolated events, and since the refinery emissions occurred over a period of 66 years, this class action should be dismissed. Justice Henderson decided to interpret Rylands as including the Inco-type continuous contamination and ruled that Inco was strictly liable under the Rylands doctrine.

Was this nickel contamination also a private nuisance? For this intentional tort, the harm may be indirect, and actual damage is required. The damage might be physical (such as this nickel contamination) or a significant interference with the use of the premises. Since it was proven that “nickel has accumulated on class members’ properties to the extent that the property values have diminished,” private nuisance was established.

Justice Henderson considered the adverse publicity from 2000 relating to the nickel contamination of the land and how that affected the property values. Real estate agents began to inform buyers about the nickel in the soil and started inserting nickel warnings into purchase and sale agreements. The MOE then requested residents to bring their garden produce and well water in for testing. Concerns were raised about the possible carcinogenic effects of nickel. Media coverage expanded from local to national. Justice Henderson concluded: “the public mood was one of extreme concern about nickel levels in the soil that could affect everything from vegetation to human health to real estate values.”

The plaintiffs did not claim that property values decreased, but rather that they did not increase commensurately over time. Experts on both sides analyzed the impact on property values using nearby Welland, Ontario, a similar city, as the benchmark. The judge said the publicity adversely affected property values. The average property value in Port Colborne should have been $169,412 in 2008 had there been no nickel contamination. The average loss was $4,514 per property. For 7,965 properties, the total amount of damages was rounded to $36 million. Inco was not assessed punitive damages.

A unanimous decision of the Ontario Court of Appeal was released 15 months later, on October 7, 2011. On essentially every ground, the Court of Appeal reversed the lower court decision. The class of resident plaintiffs lost their claim to damages for reduced property values. Their class action was dismissed and Inco was reimbursed some of its costs for successfully defending this litigation.

The Court of Appeal found errors in every important conclusion of the trial judge. It found this not to be an actionable nuisance, and Inco was not liable under Rylands v. Fletcher. The Court said the plaintiffs did not even prove that their properties had lost any value after September 2000. Even if one assumed devaluations did occur, the Court said those devaluations would not necessarily have been caused by Inco’s discharge of nickel particles on their land. In short, the residents had failed to prove any damages.

Inco had not operated its refinery unlawfully or negligently. It complied with all the environmental and other governmental regulatory schemes applicable to its refinery operation. The emissions from the refinery did not contravene any laws.

The actual physical damage only became material more than 15 years after the refinery closed, when public anxiety negatively affected the property values. The trial judge had considered the nuisance to be caused by public alarm and not by any real physical harm. The landowners never claimed the nickel particles in the soil interfered with the use or enjoyment of their property, but only that the nickel particles was “physical injury” to their property which translated to lower property values. The Court of Appeal said that this could not be characterized as damage to the property. The trial judge was wrong to conclude the nickel particles in the soil caused actual, substantial, physical damage to the plaintiffs’ lands.

As to the Rylands v. Fletcher claim, the nickel particle emissions could not be considered to have “escaped” from the Inco refinery – they were an integral part of refinery operations and were released intentionally on a daily basis for 66 years. These refinery operations and emissions were not extra-hazardous activities or fraught with danger. They did not present an abnormal risk to neighbours. This was a natural use of Inco’s property. The Court said it is better for the legislature to regulate such business activities than having judges do it through the common law.

The Court of Appeal agreed with the trial judge that Rylands v. Fletcher should not be limited to a single isolated escape. Single escapes and continuous escapes produce the same kind of damages. But the landowners also did not sufficiently prove damages, an essential component of both causes of action.

The harm in this action related to the negative effect on property values as matched to the comparable community of Welland, Ontario. The difference of 4.3% in appreciation rates over ten years between Welland and Port Colborne calculated at trial was within the range of variance to be expected in comparable communities. Overall, the Court of Appeal, comparing the data, concluded that Port Colborne either outperformed or almost equaled Welland in terms of property appreciation over the period of comparison.

The trial decision was set aside. The residents’ application for leave to the Supreme Court of Canada was dismissed on April 26, 2012.

This class action case of a large group of private landowners against a powerful mining company received much publicity and many people hoped it would be the first of many similar environmental class actions prosecuted against large corporate polluters.

In the end, several lessons were learned.

Sean Keown recently graduated with a B.Comm. from the University of Calgary in Calgary, Alberta.