A Website of The Centre for Public Legal Education Alberta
You are here: Home / Feature Articles / 38-2 Birth and the Law / No Right to “Know One’s Past”: The BCCA in Pratten v British Columbia (Attorney General)
Reading Time: 5 minutes 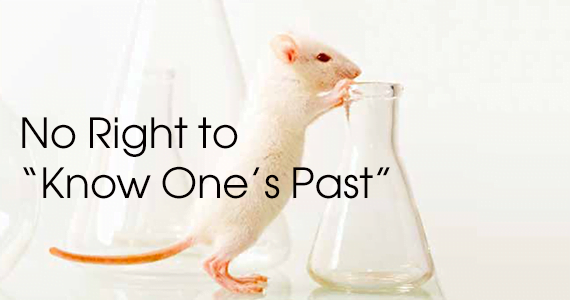 In a decision released on November 27, 2012, the British Columbia Court of Appeal (BCCA) in Pratten v British Columbia, 2012 BCCA 480, reversed the British Columbia Supreme Court’s (BCSC) decision that provisions of the provincial Adoption Act are unconstitutional as a result of their failure to take into account the rights of people conceived using sperm from an anonymous donor (“donor offspring”).

The challenge was brought by Olivia Pratten, who was conceived in 1982 using sperm from an anonymous donor. As per the rules of the College of Physicians and Surgeons of B.C., which allows records to be destroyed six years after the last entry, all records relating to the insemination procedure by which Ms. Pratten was conceived were destroyed.

Ms. Pratten argued that the Adoption Act, which contains mechanisms enabling adoptees to find their birth parents, violates section 15 of the Charter because it benefits only adoptees and not donor offspring. Additionally, Ms. Pratten claimed that the Legislature’s failure to enact legislation to allow donor offspring to access biological information violates a “free-standing” positive right to “know one’s past”, as guaranteed by section 7 of the Charter.

Ms. Pratten argued that the Adoption Act, which contains mechanisms enabling adoptees to find their birth parents, violates section 15 of the Charter because it benefits only adoptees and not donor offspring.

At trial, the BCSC found that various provisions of the Adoption Act and the Adoption Regulation violated s. 15 and declared them invalid. This declaration of invalidity was suspended for 15 months. The trial judge also granted a permanent injunction against the destruction of records containing information about the identity of sperm donors. Ms. Pratten’s s. 7 claim was dismissed. More detail about the BCSC decision can be found here.

The trial judge made some important findings of fact in her decision (found at paragraph 111) which were not challenged on appeal. Among them include the fact that donor offspring feel that their health can and may be seriously compromised by lack of information about their donor. Based on expert medical evidence, the trial judge found that these fears are justified.

…donor offspring feel that their health can and may be seriously compromised by lack of information about their donor.

Additionally, she found that donor offspring can face delayed medical treatment because of their inability to give complete family histories and that these stresses can cause them sadness, frustration, depression and anxiety. The trial judge stated that donor offspring experience similar struggles and a sense of incompleteness as adoptees, but that they do not have the same institutions and support in the form of legislation that adoptees have.

In the BCCA decision, Justice Frankel begins by analyzing the history of adoption legislation before moving on to the Charter arguments. Notably, he highlights that prior to 1996 the court-ordered adoption process was kept confidential. Legislative changes in 1996 were effected to respond to “changing social conditions” in order to “provide for open adoptions and granted adoptees…qualified access to their adoption order and registration of birth” (para 33).

The BCSC found that the Legislature’s failure to address the needs of donor offspring in the Adoption Act discriminated against them on the basis of the “manner of their conception” and that this distinction could not be saved by s. 1.

In the landmark s. 15(2) decision in R v Kapp, 2008 SCC 41, the SCC set out that in order to save a legislative scheme under s. 15(2), the state must show that the program has an ameliorative or remedial purpose that targets a disadvantaged group identified by an enumerated or analogous ground. This step is undertaken before analyzing the impugned law under s. 15(1); therefore, it is analyzed before considering whether the law is in fact discriminatory.

As the Attorney General conceded that “manner of conception” was a protected analogous ground, the BCCA then moved on to determine whether the provisions of the Adoption Act are saved by s. 15(2). Based on Kapp, Justice Frankel finds that the impugned provisions do qualify as an ameliorative program, as “[t]he purpose of the impugned provisions is to remedy the disadvantages created by the state-sanctioned dissociation of adoptees from their biological parents”. In addition, it is found that adoptees are “a group which has historically, if not currently, been subject to negative social characterization”.

…the BCCA states that it is an accepted finding of fact that the negative effects of not knowing their biological history are the same for adoptees as for donor offspring.

While I can see how the provisions of the Adoption Act can fit squarely under s. 15(2), this decision highlights some of the struggles courts have been facing surrounding s. 15 jurisprudence. Earlier in the decision the BCCA states that it is an accepted finding of fact that the negative effects of not knowing their biological history are the same for adoptees as for donor offspring. It is therefore difficult to argue that the legislation is invalid when it is conferring benefits on a similarly disadvantaged group. While the courts have somewhat moved away from a formal comparator group analysis in s. 15 cases, most claimants must still either pit themselves against another disadvantaged group or find themselves being compared to the advantaged norm.

Given the issues that often arise in s. 15 cases, an argument that s. 7 of the Charter encompasses a free-standing right to know one’s biological origins and, further, imposes a positive duty on the state to enact legislation that gives effect to that right, is a matter in which Ms. Pratten could have received the legislative recognition she desired without taking away rights for a similarly disadvantaged group such as adoptees.

Ms. Pratten argued that this would be an appropriate case for the courts to recognize positive rights under s. 7 because the duty on the state would be “minimal” and would involve a small amount of expenditure on the part of the government. In dismissing this argument, Justice Frankel states that the right to know one’s past would have far-reaching implications which would extend far beyond adoptees or donor offspring. He also does not accept the argument that this right is so fundamental that it rises to the level of constitutionally protected status.

Justice Frankel does the same thing that was done by the majority in Gosselin in that he states that s. 7 could be capable of guaranteeing positive rights, but declines to recognize those rights. As Justice Arbour succinctly put it:

“The first two decades of Charter litigation testify to a certain timidity – both on the part of litigants and the courts – to tackle head on the claims emerging from the right to be free from want.”

This timidity has resulted in jurisprudence that hints at positive rights but never actually recognizes what a positive s. 7 right might look like. The “right to be free from want” could clearly be extremely broad – want from what? And how would the state recognize this right, especially in the age of austerity? These questions are again left for another decision, by another court, at another time.

This article was originally published in The Court, November 30, 2012

Nikita Rathwell is one of the senior contributing editors of TheCourt.ca, a blog staffed by students at Osgoode Hall Law School, York University working under the supervision of a faculty member.