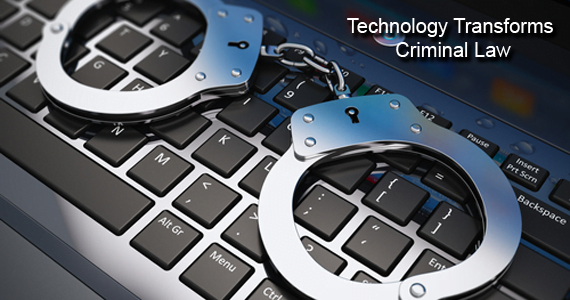 As with society in general, the practice of criminal law has changed significantly over recent decades as a result of the amazing growth and development of technologies which, until now, were only ideas and imaginings of science-fiction writers. The lawyer of 20 or 30 years ago would likely be startled to see some of the innovations which are now commonplace in our courtrooms. Developments have taken place in virtually all aspects of this field, from the investigation of crime and the gathering of evidence, through to the prosecution and defence of cases in court.  Hundreds of pages of legal texts and judicial decisions have been written discussing these changes. Here are some of the most notable ways in which modern technology has changed the practice of criminal law.

With the development of the technology needed to break down and analyze Deoxyribonucleic Acid (“DNA”), all of that changed. DNA is often referred to as our individual genetic “blue print”. Because each human being has a different code contained in our DNA at the cellular level, it is now possible for scientists to virtually match the DNA from one sample of human fluid or tissue, to that in another. (I have used the phrase “virtually match” because in fact, the results of comparisons are never described in terms of actually matching; rather, the odds of the two samples being from different persons are usually offered instead. But because these numbers are usually astronomical in nature – often one in several trillion – it ends up being “virtually” the same thing as an actual match.) Now, for example, the DNA of a victim which is found in blood on the clothing of a suspect or accused will provide very powerful evidence in court. Even more damning is the identification of the DNA of an accused person in cases of sexual assault.  And, it should not be completely forgotten that DNA can also be used to exonerate innocent persons. According to some sources the first time DNA was used in a criminal case was to demonstrate that the accused person was not the culprit in a 1986 trial in England.

Cellular telephone technology has proven useful in other ways, as well. For example, cellphones which have a working battery constantly send a signal to the closest cellphone towers even when they are not actually being used. Such signals are always recorded and, if obtained by the police, can be analyzed and interpreted so as to pinpoint, often to within a few feet or metres, where the cellphone was located at a particular time. Such evidence can be very useful in placing a suspect – or at least, his or her phone – in the vicinity of a crime scene or occurrence at a time which is of significance in the investigation.

The area where computers  are actually central to the offensive conduct itself is in the possession and circulation of child pornography. In past times, accused persons might be prosecuted if they were found in possession of drawings or photographs of children engaged in sexual activities. Now, with computers and the Internet,  it is not uncommon for police to discover thousands of images and videos on the computers of persons being investigated for child pornography offences. In fact, it was only about 20 years ago that Parliament first enacted those parts of our Criminal Code which deal with this area of criminal activity and began equipping police with the tools needed to investigate and prosecute these horrible offences.

Technology has also changed a number of ways in which court proceedings take place. One of these is in the area of legal research and the preparation of arguments for court. In the not-so-distant past, lawyers’ offices and courtrooms held large libraries of published case reports.  Now, however, this has become relatively rare, because most legal research is conducted using various online databases and computer search tools. Law libraries are shrinking in numbers and size as  lawyers, judges and members of the public turn to the Internet and various court and legal websites. Virtually every written decision (and many rulings delivered orally as well) can be found somewhere on one of the databases used by lawyers and judges.

Technology is changing the courtroom in relation to the record-keeping of the proceedings. Until recently, the court staff at every proceeding included a court reporter whose role was to keep a written transcript of everything said by any person while the court was in session. While tape recorders have long provided a “back up” function for the reporters, such recordings were not considered reliable enough to be used on their own. The court reporter’s version of the transcript was considered the official record of the proceedings. Now, however, court reporters are being completely replaced by digital recording equipment operated by the clerk of the court, as governments across the country have decided that these systems are cheaper. As a result, court reporters are disappearing from the scene.

Similarly, accused persons in custody are now able to make at least some of their court attendances by video link. In many situations, being required to attend in person means the accused must be transported from jail to the courthouse, for even short appearances. They often must then spend the remainder of the day in a small holding cell until the authorities are able to return them to the remand facility. Once back at the jail, the prisoner is subjected to security procedures such as personal search to ensure that he or she has not come into possession of any form of contraband (drugs, weapons, etc.) while away from the institution. Making the appearance by video connection means the accused avoids all of these measures and also reduces public expense.

As technology continues to evolve, advance and change, so too will its use in our courtrooms. However, the basic strength of our court system is its humanity. For all its flaws and failings, our system is still the product of human beings, and still requires direct input, assessment and decision-making by individuals. In the coming years this may be the challenge: maintaining that “human touch” in the face of an increasingly pervasive role of technological advances and tools.