A Website of The Centre for Public Legal Education Alberta
You are here: Home / Special Report / 42-1: The Senate / The Senate Reference: Supreme Court of Canada Outlines Constitutional Road to Reform
Reading Time: 8 minutes 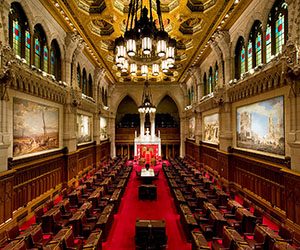 What is the Senate? What does it do?

The Senate is the second house in Canada’s two-house parliamentary system. It is comprised of 105 Senators who are appointed by the Governor General on advice of the federal government. Senators can work until they reach the mandatory retirement age of 75.

The SCC made clear that Parliament cannot act alone on any significant changes to the Senate–it needs substantial provincial consent for all changes proposed, except for the property and net worth requirements.

The powers and duties of the Senate are described in sections 21-36 of the Constitution Act, 1867. The Senate is often referred to as the ‘house of sober second thought’ because its major role is reviewing the bills that the House of Commons passes, and ultimately, approving or rejecting them. The Senate can reject bills entirely or suggest improvements. In either case, the bills are sent back to the House of Commons for final ratification.

Why was Senate reform an issue for Parliament?

The concept of Senate reform is almost as old as the Senate itself. Parliament first considered reform measures in 1874 – just seven years after the creation of the Senate. In 1874, the House of Commons was asked to consider amending the Constitution to allow each province to choose their own Senators.

Over the years, the major reform measures that have proposed are consultative elections (meaning the Senators are still appointed, but the provinces are asked who are their preferred candidates), limits on the terms for Senators, or the abolition of the Senate entirely.

With the introduction of the National Energy Program (NEP) in the 1970s, the Senate reform conversation heated up. In particular, Albertans thought if they had been represented properly in the Senate, they would not be subject to “majority rule” motions they disagreed with, like the NEP. This is when Alberta rallied behind the idea of a “Triple-E” Senate: an equal, elected, and effective Senate. The Triple-E Senate envisions equal representation of Senate seats for each province and elected Senators to increase accountability to the public. Although a Triple-E Senate never materialized, Alberta implemented its own consultative election process. Starting in 1989, Albertans were given the opportunity to vote on who they would want as a Senator in non-binding polls.

Abolishing the Senate altogether would fundamentally change Canada’s constitutional structure by removing its two-house, or bicameral, system. For this reason, the change would mean that all provinces must approve the change (the amending formula’s “unanimity clause”). The concept of Senate reform became hot (again) in the late 2000s when Senate controversies came to light, including the suspension of Senators for expense scandals and the criminal trial of Senator Mike Duffy. To address problems with the Senate, in 2011, the Conservative government proposed the Reform Act which sought to add provincial consultative elections to the appointment process and nine-year terms for Senators. The Reform Act was never passed because it was outside of Parliament’s authority to make the changes without a constitutional amendment.

What was the Senate Reference?

A reference is an opportunity for the government to ask the SCC questions about the constitutionality of potential government actions or legislation. The government seeks a reference to obtain the SCC’s legal opinion on prospective legal challenges. The SCC can choose to respond (or not) to the questions asked. The response the SCC offers is an expert or advisory opinion, but is not binding.

In 2014, the federal government asked the SCC whether it could put Senate reform into action, asking how far it could go on its own, without consulting the provinces. The government was uncertain about Parliament’s authority to change specific aspects of the Senate such as term limits or eligibility requirements.

What did the government ask?

The government asked the SCC these questions:

How did the SCC respond?

Because the Senate is created by the Constitution Act, 1867, any changes to its structure require a constitutional amendment. The government was concerned about how those amendments might be made as the Constitution requires different amending procedures depending on the nature of the change sought.

The Senate was intended to be a complement to the House of Commons, not a rival. In the Senate Reference, the SCC outlined which amending procedure would need to be used for each potential change to the Senate. Some changes, for example, require unanimous agreement by the provinces. Others require the agreement of seven provinces (that must make up at least 50% of the population of Canada) to approve the change. This latter formula, called the general amending formula, is the most commonly relied-upon procedure.

The SCC explained that consulting the provinces to find out who they would prefer as Senators would weaken the Senate’s fundamental nature and role as a body for legislative review. Consultative elections would consist of asking provinces who they would want as Senators, with the Prime Minister only having to consider the results.

Although the text of the Constitution would not significant changes to allow for consultative elections, the practice would significantly alter the current appointment process, resulting in more than just a change to the text. This greater effect would alter the Constitution‘s “internal architecture”– an idea that the entirety of the Constitution must be interpreted as a whole. In other words, if one brick is removed, the whole thing could fall apart.

The SCC explained that consulting the provinces to find out who they would prefer as Senators would weaken the Senate’s fundamental nature and role as a body for legislative review. Having Senators appointed was “[the framers’] original answer to the clash that would inevitably occur between two elected chambers.” The Senate was intended to be a complement to the House of Commons, not a rival. Changing to consultative elections would also likely place election pressures on potential Senators because they would have to adopt a popular mandate to be elected by the masses. Such pressures could result in Senators losing their objectivity as they would feel the need to support legislation that they campaigned on. Interestingly, the SCC did not comment on Alberta’s ongoing consultative election scheme.

The Constitution outlines that the general amending formula should apply to changes to the method of selecting Senators, and implementing consultative elections would fall under this category. The general amending procedure “protects” the process of selecting Senators by needing agreement from the provinces, and not allowing Parliament to make changes without substantial provincial agreement.

Security of tenure (the fact that Senators cannot lose their jobs until retirement at 75) allows Senators to act independently of the House of Commons because they are not in fear of losing their jobs or of losing elections based on the decisions they make. A switch to fixed-length terms would allow Senators to stay in the role for a set amount of time.

Because the Senate is created by the Constitution Act, 1867, any changes to its structure require a constitutional amendment. The government argued that, since it is exclusively allowed to make laws governing the Senate, it should be able to impose fixed term limits unilaterally. However, the SCC explained that a change to fixed terms for Senators would not only affect the Senate’s fundamental nature and role (because of the practical effects that would occur), but also that the change which would involve all “stakeholders in our constitutional design”, i.e. all the provinces. Because of this effect on provincial interests, the general amending formula would have to be used to make sure there is substantial provincial support for the change.

3. The requirements for Senators’ net worth and property can be amended unilaterally by the federal government, with one condition.

The Constitution has two property requirements for appointment to the Senate: 1) potential Senators must own land worth at least $4,000 in the province they are from, and 2) they must have a personal net worth of at least $4,000. The SCC explained that the change or removal of either qualification would not alter the fundamental nature and role of the Senate, so the federal government can unilaterally change this requirement.

The concept of Senate reform is almost as old as the Senate itself. Parliament first considered reform measures in 1874 – just seven years after the creation of the Senate. Senators from Quebec, however, have a special arrangement for their property requirements. The land they own (worth at least $4,000) must be in a specific electoral district. Because of this special arrangement, the federal government would need the approval of Quebec’s general assembly to change this requirement for the province.

4.   Unanimous consent is needed to abolish the Senate.

Abolishing the Senate altogether would fundamentally change Canada’s constitutional structure by removing its two-house, or bicameral, system. For this reason, the change would mean that all provinces must approve the change (the amending formula’s “unanimity clause”). The SCC explained that, although the general amending procedure can be used for Senate “reform”, abolishment is vastly different from reform. It would significantly change the nature of our democratic system.

What did this reference teach us about constitutional change?

For the first time, the SCC clearly outlined how the amending procedures in the Constitution work. It also described how specific changes to the Senate can be made.  The SCC made clear that Parliament cannot act alone on any significant changes to the Senate–it needs substantial provincial consent for all changes proposed, except for the property and net worth requirements.

Will there ever be changes to the Senate?

In light of the criticisms of the Senate, scandals, and the Senate Reference, the Senate appears to have woken up.

Recently, changes have been made in the Senate without formal or constitutional amendment-driven reform – the Senate has come alive! Proposed bills are being initiated from the Senate, such as the shield law to protect journalists’ sources. Caucus rules have changed, resulting in many Senators no longer feeling a need to vote within party lines and having the ability to create new caucuses based on region, ideology, or issues, such as a military caucus or women’s caucus.

The concept of Senate reform became hot (again) in the late 2000s when Senate controversies came to light, including the suspension of Senators for expense scandals and the criminal trial of Senator Mike Duffy. Stringent review of bills coming from the House of Commons has resulted in proposed changes suggested by the Senate. For example, with the 2017 federal budget and infrastructure bank omnibus bill: the Senate was concerned about the new infrastructure bank, and wanted to split the bill into two, so that the budget could be passed without the infrastructure bank. This caused an uproar when the House vehemently disagreed, and the Senate almost did not pass the bill before Parliament broke for the summer. It was narrowly passed by a vote of 38-38 in the Senate, with the House Leader breaking the tie in favour of the bill.

Interestingly, not everyone is happy about change in the Senate. Critics allege the Senate is overstepping its role – it should only be making sure that bills are good enough to become law. What is this new, Senate “activism”? In contrast, some allege that recent events demonstrate that the Senate is, for the first time in a long time, being true to its mandate of conducting the “sober second thought” needed for review of bills from Parliament.

Katherine Creelman is a second-year law student at the University of Alberta. She wrote this article as part of her work as a summer student researcher with the Centre for Constitutional Studies.