A Website of The Centre for Public Legal Education Alberta
You are here: Home / Special Report / 42-1: The Senate / A Renewed Senate That Works for Canadians
Reading Time: 6 minutes 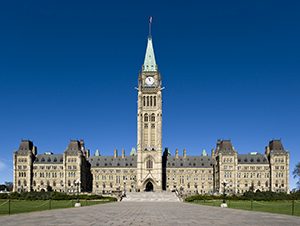 Had you been standing in the foyer of Canada’s Senate on June 22nd  2017, you’d have been forgiven for thinking that a constitutional crisis was about to engulf our nation’s Parliament.

While the national media waited outside the chamber with cameras, microphones and hot television lights in tow, senators on the inside were voting on whether to send a message to the House of Commons insisting that it adopt a Senate amendment with respect to the ongoing taxation of alcohol.

The renewed Senate will be judged on whether it makes better laws for Canadians and whether it includes them in its deliberation.

Had the Senate taken this almost-unprecedented step, the Commons would have had to respond, almost certainly by reaffirming its own view that the budget be passed without amendment. This would have constituted a game of legislative ping pong between the two houses, with legislators looking for a way to break the deadlock.

It didn’t turn out that way, of course.

Senators ultimately agreed that the budget be passed without amendment, deferring to the elected accountability of the Commons. Cool heads and sober secondthinking helped avert the parliamentary standoff that some feared.

As the Government’s Representative in the Senate, there have been more than a few occasions over the past year that have left me with a touch of heartburn. But, as the spring sitting ended, this discomfort seems a small price to pay as we work to create a more modern Senate designed to be less partisan, more independent, accountable and transparent, and truly complementary to the elected House of Commons. When you sweep away the chaff left over from the sometimes messy business of modernizing the upper chamber, Canada’s Senate scrutinized, debated and eventually passed 26 bills since June of 2016, often with amendments accepted by the House of Commons.  It was a place where members of the public increasingly made their voices heard on policies that were important to them and where debate often had the effect of triggering change even before bills arrived in the Red Chamber.

There are, to be sure, many challenges ahead as we build a legislative record demonstrating that the Senate’s modernization project is good for Canada. But I’d argue that we’re further ahead than many political observers thought we’d be one year ago.

To understand where we’re going, a bit of history is required.

To begin with, the 150th birthday that we’re busy celebrating this year might not be happening had the Fathers of Confederation not agreed on the need for an upper chamber.

In 2014, as leader of the Liberal Party, he took action by removing all Liberal senators from his caucus…[t] These new appointees – of which there are now 27, with 11 more vacancies coming open by the fall – sit as Independents in the Senate. It’s well to remember that Canada’s founders spent six of 14 days discussing the Senate when they got together in Quebec City in 1864 to strike the Confederation deal. The Senate was crafted to provide a moderating voice on behalf of the smaller regions and minority groups whose voices can sometimes be muffled by the elected majority in the Commons. It wouldn’t be an exaggeration to say that the Maritime Provinces may not have agreed to the bargain without a Senate to protect regional interests.

In the view of Sir John A. Macdonald, the Senate was also intended to be a chamber of ‘sober second thought’ with a mandate to regulate, review and amend legislation initiated by the elected House of Commons. And while it was to be invested with most of the powers of the House (save for initiating money bills), the fact that the Senate was not elected checked any inclination members might have to overreach when reviewing legislation from the Commons. Senators decided last June, for example, that they would not insist on changes to the budget in part, I believe, because doing so would have exceeded the complementary function conceived for them at Confederation. So, in a real sense, the Senate that we are busy remodelling increasingly resembles the one that Canada’s founders envisioned.

Alas, in practice, the upper chamber did not always live up to the goals of the founders or the expectations of Canadians.

The difficulties of the last decade or so are well-known, and need not be reviewed in detail here. Suffice to say that Canadians’ trust in the institution was deeply undermined  by expense scandals and hyper-partisanship. Canadians began to believe that the Senate was little more than a House of Commons echo-chamber, where bills were merely rubber-stamped by senators who owed their allegiance to the prime minister that appointed them. Some Canadians understandably asked what the point was of having a bi-cameral system?

Canadians began to believe that the Senate was little more than a House of Commons echo-chamber, where bills were merely rubber-stamped by senators who owed their allegiance to the prime minister that appointed them. Meanwhile, efforts to change the Senate, including calls to turn it into an elected chamber, became moot in the wake of the Supreme Court of Canada ruling of 2014, which confirmed that significant change required a reopening of the Constitution. Outright abolition, for example, needed the unanimous agreement of provinces and the federal Parliament, while electing senators required the agreement of at least seven provinces representing a combined population of more than 50 per cent of Canadians.

Given these restrictions, Prime Minister Justin Trudeau moved to change the system in the ways that were effectively open to him. In 2014, as leader of the Liberal Party, he took action by removing all Liberal senators from his caucus. After his party was elected, the Prime Minister began selecting new senators through a new arms-length process under which interested candidates are asked to apply to an independent advisory board, which then makes recommendations to the PM.

These new appointees – of which there are now 27, with 11 more vacancies coming open by the fall – sit as Independents in the Senate. Given that they do not join with a caucus in the House, they vote according to their judgment. Unlike in the past, the three-person Government representative team in the Senate cannot direct senators on how to vote because we have no favours to confer or punitive actions to impose. Freed from their votes being ‘whipped,’ these senators exhibit the kind of sober second thought that Sir John A. MacDonald and other founders had visualized.

So far, the results are encouraging.

As the Government’s Representative in the Senate, there have been more than a few occasions over the past year that have left me with a touch of heartburn. For example, our evolving Senate made significant amendments earlier this year to Bill C-6, which repealed 2014 legislation that erected additional barriers to citizenship. Specifically, the Senate added an appeal process for those who face losing their Canadian citizenship because of allegations of fraud or misrepresentation.  In another example, late last year, a group of senators led by Independent Senator André Pratte, objected to provisions in a bill establishing new federal consumer-protection measures under the Bank Act.  Senator Pratte argued at that time that the law infringed on provincial jurisdiction. The federal Finance Minister listened and has agreed to bring in a new bill. The House of Commons has also accepted Senate amendments on life-saving legislation aimed at tackling Canada’s growing opioid crisis, as well as amendments further empowering the RCMP to engage in collective bargaining, among other examples.

That’s not to say that there haven’t been bumps in the road and challenges that we must still meet.

To wit, the description of what constitutes sober second thought is still, to some extent, being developed. While it is well-established that the unelected positions senators hold circumscribe some of their political authority, we continue to debate what complementarity means. This debate, I believe, will evolve over time, informed by the fact that senators are appointed, and not elected.

Second, the new more-independent system is also only half-built, and there are those who would prefer to go back to the old ways. Conservative senators, for example, still meet with their House of Commons caucus colleagues and have taken the traditional position that they exist to oppose government legislation.

This leads to a Senate that is somewhat bifurcated.

On one hand, we have senators who act unencumbered by party direction or electioneering, voting and amending legislation according to their judgment. On the other, we have a group of senators whose stated goal is to oppose with an eye to the next election. Canadians will have to decide which model best serves their interests in Parliament.

For those working to build a more independent institution, another task that we must tackle is getting the word out to Canadians about how this remodelled Senate will work better than what went before. To that end, I and my colleagues have written op-eds, given speeches and generally made ourselves available to discuss the project. Most recently, I was in Calgary and Edmonton doing just this, and I will continue to make the case for Senate renewal to Canadians every chance I get. The Senate has also built for itself a new website, complete with modern social media and digital communications tools.

But we can’t be the only ones doing the talking. An important part of the project is hearing from you   – both in terms of advice on how to make the Senate a better place, and on how you feel about various bills and issues of the day.

These are not hollow sentiments. The renewed Senate will be judged on whether it makes better laws for Canadians and whether it includes them in its deliberation.

As the upper chamber becomes more independent and less-tied to the political parties in the House of Commons, Canadians can be more confident that their views will be listened to.

My closing advice to you is to get to know the senators in your region.   They work for you.

Senator Peter Harder is the Government Representative in the Senate of Canada.