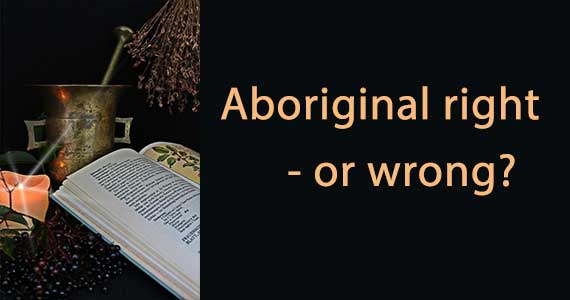 Two eleven-year-old girls from neighbouring First Nations in southwestern Ontario were diagnosed last year with acute lymphoblastic leukemia, a cancer of the bone marrow. Both received chemotherapy, then stopped. One has died. Makayla Sault of the Missisaugas of the New Credit, after eleven weeks, told her parents that the treatments were “killing her,” and discontinued the treatment last spring. She died in January, after following “alternative remedies,” including an $18,000 treatment at the Hippocrates Health Institute in Florida.

The Institute is run by Brian Clement, a “nutrition counsellor” claiming a Ph.D. in philosophy from the University of Science Arts and Technology of Montserrat, where it has been refused medical accreditation. The other young girl can be known only as J.J., by court order. From the Six Nations, she was the subject of a remarkable decision by the Ontario Court of Justice (the provincial court) that found her mother to have a constitutionally-protected right to pursue traditional medicine. Licensed as a “massage establishment,” treatments include cold laser therapy, Vitamin C injections and a strict raw food diet, not to mention Aqua Chi Ionic Footbath, BioEnergy Field Intervention and The Power of The Mind in Getting Well Program™, none of which seems particularly Aboriginal.

According to the First Nation, “Makayla was on her way to wellness, bravely fighting toward holistic well-being after the harsh side effects that 12 weeks of chemotherapy inflicted on her body. Chemotherapy did irreversible damage to her heart and major organs. This was the cause of the stroke.”

But a pediatric oncologist is quoted as saying no drug could have caused a stroke months after the fact: Her death “had absolutely nothing to do with the chemo [and] probably has everything to do with the leukemia coming back.” He explained that cancer cells accumulating in untreated blood make it more viscous, causing clots and so a stroke.

The other young girl can be known only as J.J., by court order. From the Six Nations, she was the subject of a remarkable decision by the Ontario Court of Justice (the provincial court) that found her mother to have a constitutionally-protected right to pursue traditional medicine. J.J. started chemotherapy in August, but her mother withdrew consent after 12 days, having spoken with Clement: “He had the tone of voice where he was so confident. By him saying, ‘Oh yes no problem we can help her,’ that’s the day I stopped the chemo.” The family found the money to attend the Institute in Florida.

The Ontario hospital applied to the Court a few weeks later for an order stating that J.J. was “a child in need of protection,” and requiring her to be returned for treatment. The central principle laid down was, “to be an aboriginal right, an activity must be an element of a practice, custom or tradition integral to the distinctive culture of the aboriginal group claiming the right.” Under the Ontario Child and Family Services Act, “A child is in need of protection where … the child requires medical treatment to cure, prevent or alleviate physical harm or suffering and the child’s parent or the person having charge of the child does not provide, or refuses or is unavailable or unable to consent to, the treatment.” Dr. Breakey, Pediatric Hematologist/Oncologist at McMaster Children’s Hospital in Hamilton, Ontario stated, “this leukemia has an approximately 90% cure rate with the recommended treatment. Without chemotherapy, we are not aware of any survivors of pediatric leukemia.”

The Court found, “The family are committed traditional longhouse believers who integrate their culture into their day-to-day living.” Nevertheless, by the time the proceeding had begun, mother and J.J. had left for Florida.

Was J.J. “in need of protection”? Judge Edward found J.J. “lacked capacity to [discontinue] chemotherapy.” He also observed, “no one … is suggesting [the mother] is anyone but a caring loving parent.” He then considered whether the mother’s decision “to pursue traditional medicine is in fact an aboriginal right” constitutionally protected under s. 35 of the Constitution Act, 1982, as submitted by the Six Nations, a party to the proceeding by court order. (No more explanation is offered for this than “it was felt there was an obvious need for input from … the band.” But only because the band was a party under compulsion did this case come to turn on Aboriginal rights.) He turned to R. v. Van der Peet, a 1996 decision of the Supreme Court of Canada and the leading case on Aboriginal rights. It was about selling fish; typically Aboriginal rights cases are about resource harvesting or disposition. The central principle laid down was, “to be an aboriginal right, an activity must be an element of a practice, custom or tradition integral to the distinctive culture of the aboriginal group claiming the right.”

From a review of the “Haudenosaunee Code of Behaviour for Traditional Medicine Healers” and other evidence, Judge Edward found that “traditional medicine continues to be practised on Six Nations as it was prior to European contact and, in this court’s view, there is no question it forms an integral part of who the Six Nations are.”

Judge Edward relied heavily on the evidence of Dr. Karen Hill, a Six Nations medical doctor, practising on Six Nations in concert with a traditional medicine practitioner. The Haudenosaunee Code of Behaviour acknowledges that traditional medicine is not absolute: “As traditional healers, we commit ourselves to referring our clientele to other healers, doctors, or practitioners whenever we feel another form of care is required.” Avoidance of harm in the exercise of rights was expanded on by Madam Justice McLachlin (not then Chief Justice), who wrote, “Any right, aboriginal or other, by its very nature carries with it the obligation to use it responsibly. Yet there is no record that Dr. Hill was asked whether, given the evidence of Dr. Breakey that chemotherapy had a 90% cure rate and survival was unlikely without it, this may be a case for “another form of care.” Nor was she asked for her view of the $18,000 treatment in Florida in contrast to the Code’s commitment “to using our medicines wisely and respectfully and prohibiting ourselves from selling our medicines or knowledge for commercial purposes or personal gain.”

The Judge was quite selective in his reliance on authority. He repeats Professor Hogg’s observation, in his classic text on constitutional law, that Aboriginal rights, being outside the Charter, are not subject to s. 1 “reasonable limits,” but ignores what Professor Hogg goes on to say, that they are subject to “reasonable regulation.” In fact, the Sparrow decision of 1990, the first Supreme Court of Canada Aboriginal rights decision, held that these rights may be infringed for valid objectives, including those that “prevent the exercise of … rights that would cause harm to the general populace or to aboriginal peoples themselves.” Judge Edward treats the rights as absolute, preventing any consideration of whether an infringement might be justified.

The Judge also ignored critical qualifications by the Supreme Court in Van der Peet. Avoidance of harm in the exercise of rights was expanded on by Madam Justice McLachlin (not then Chief Justice), who wrote, “Any right, aboriginal or other, by its very nature carries with it the obligation to use it responsibly. No one has the “right” to deny the best available medical care to a child. It cannot be used, for example, in a way which harms people, aboriginal or non aboriginal. It is up to the Crown to establish a regulatory regime which respects these objectives,” and, “Conservation, for example, is the condition upon which the right to use the resource is itself based; without conservation, there can be no right. The prevention of harm to others is equally compelling. No one can be permitted to exercise rights in a way that will harm others.”

These cases were about fish. There can hardly be a more valid infringement of an Aboriginal right than conservation of a child, even if the right existed. No one has the “right” to deny the best available medical care to a child. Judge Edward’s decision gives a bad name to Aboriginal rights. For some, it will just confirm prejudices.

For all her commitment to the longhouse traditions, J.J.’s mother was, in her actions, very much in that segment of society that distrusts science, the need for evidence, and authority generally. In another irony, this did not prevent her from turning to the hospital initially, for her child’s diagnosis. We have yet to learn the final outcome of this sad story.