A Website of The Centre for Public Legal Education Alberta
You are here: Home / Feature Articles / 42-2: Five Top Questions / Can I Leave Someone Out Of My Will?
Reading Time: 6 minutes 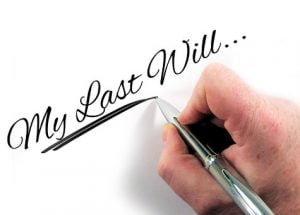 The short answer to the question is yes, depending on the circumstances. In this article, I will be discussing the relevant parts of the Alberta legislation that pertains to the writing of Wills: the Wills and Succession Act, SA 2010, c. W-12.2 (referred to after as “the Act”). I will be addressing the following:

Who can make a Will?

The short answer to the question is yes, depending on the circumstances. The Act does not define the mental capacity required to make a Will, so lawyers and judges have had to look to case law. The classic, leading case in the English-speaking world about the mental capacity to make a Will, (called by lawyers “testamentary capacity”)  is Banks v Goodfellow (1870), LR 5, QB 549. This 19th century decision from the United Kingdom stands for the proposition that an adult’s freedom to give away their property after dying, as they deem fit while living, is of fundamental importance. The test for whether a maker has testamentary capacity, though not an exact science, does include certain characteristics. The maker must understand what s/he is doing at the signing of the Will; must have at least a general idea of the nature of their assets and their value; and know who their beneficiaries are and their relationship to her/him.

There is an exception to the age requirement (but not to the requirement of testamentary capacity) for a person under 18 who is or was a spouse or is or was an adult interdependent partner of or was a member of Canada’s military in active service at the time the Will was made.

What are the formalities for making a Will?

Otherwise healthy deadbeat adults borrowing money for next month’s rent or still living in mom or dad’s basement, take note.For the purposes of this article, the maker’s testamentary capacity is assumed to not be in doubt.  However, it is incumbent on a Wills and Estates lawyer (or anyone else who might be drafting a Will for somebody) to make relevant notes of the interview with the maker. These notes could address observations regarding the maker’s knowledge of the nature, value and location of assets; who are their family members and friends; and what are their favourite charities, among other things. This is due diligence in any event, but becomes of even more critical importance if the maker is elderly and has capacity-related issues.

Assuming testamentary capacity, then, the essential formalities for a valid Will are:

1) the Will must be in writing;

2) the Will must be signed by the maker;

3) the maker’s signature must be witnessed by two people having mental capacity who are present at the signing and who themselves must also sign the Will;

4) a witness cannot be a beneficiary of any portion of the Estate; and

5) if the maker is unable to sign because of age and/or infirmity, somebody may sign for her/him but that endorser cannot also sign as a witness.

There are limited exceptions to these essential formalities. In most Canadian provinces, including Alberta, a person may prepare a holographic Will; i.e. one that is literally in their own handwriting or printing (neither typed nor prepared by another person), is signed by the maker and dated. A holographic Will does not have to be witnessed. Also, a member of Canada’s military on active service may also prepare a Will without the presence or signature of a witness or any other formality.

Who must be provided for in a Will?

Our legal system accords a high degree of respect for individual autonomy; which is the right of an adult to dispose of property after death as set out in her/his Will. If all the formalities for making a Will have been met, unless a person challenging a Will can establish through evidence that the maker lacked the mental capacity to make a Will and/or was subject to undue influence, the probate courts are loath to find a Will invalid in part or in whole. There is one major exception and that arises where a maker has failed to meet her/his legal obligations to make adequate provision for dependent family members.

In most Canadian provinces, including Alberta, a person may prepare a holographic Will; i.e. one that is literally in their own handwriting or printing (neither typed nor prepared by another person), is signed by the maker and dated.These obligations have been codified in the Act under Part 5: Family Maintenance and Support. Should a maker leave a dependent family member out of her/his Will or fail to make adequate provision for that family member, the probate court, upon application by or on behalf of an aggrieved dependent family member, has the power to re-write or reconstruct the Will as necessary to make provision out of the Estate for that family member.  The list of family members for whom adequate provision in a Will must be made is set out in section 72(b) of the Act; they are:

Case law has established that “of the deceased”  includes children from a previous marriage or marriages, step-children and adopted children.  It must be stressed that the courts retain broad discretion to make orders that are just in the specific circumstances of a case. For example, if children from a previous marriage were estranged from a parent for whatever reason (alienation of affection by the former spouse immediately comes to mind), a court would probably take that into consideration in deciding what amount, if indeed anything, should be awarded from the Estate.

Who may be excluded from a Will?

There is nothing in the Act nor any precedent in case law that requires provision of any kind for a former spouse or independent adult child. Otherwise healthy deadbeat adults borrowing money for next month’s rent or still living in mom or dad’s basement, take note. Any claim you may think you have on any part of your deceased parent’s Estate would be, at best, a moral claim and it would be an extremely tenuous one.

Our legal system accords a high degree of respect for individual autonomy; which is the right of an adult to dispose of property after death as set out in her/his Will. The Supreme Court of Canada in the case of Tataryn v Tataryn Estate, [1994] 2 SCR 807 set out a process for the courts to apply in deciding whether to vary a term of a Will on the application of a family member for adequate provision. The Supreme Court reviewed legislation from British Columbia similar in wording and effect to Alberta’s. The Tataryn decision stands for the proposition that a probate court must weigh both a maker’s legal obligations and moral obligations, with the legal obligations to dependent family members taking priority because of their higher status in law. The Supreme Court defined moral obligations as “society’s reasonable expectations of what a judicious person would do in the circumstances, by reference to community standards.” Moral obligations themselves assumed a line-up of priority in the Supreme Court’s reckoning, with the moral claim of an adult independent child falling lowest in priority.

In conclusion, though a person making a Will may exclude somebody from a Will, the maker should consult with a lawyer to decrease the chances of using offensive wording or having the Will overturned.