A Website of The Centre for Public Legal Education Alberta
You are here: Home / Feature Articles / 37-3: Constitutions / Evolution, Not Revolution: Canada’s Constitutional History and the Constitution Act, 1867
Reading Time: 6 minutes

You say you want a revolution,

We all want to change the world

You tell me that it’s evolution

We all want to change the world…

You say you’ll change the constitution

We all want to change your head

From “Revolution” by John Lennon and Paul McCartney 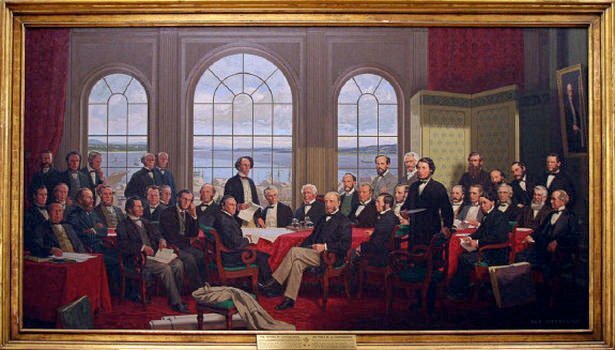 Although they are not famous for their knowledge of constitutional law or history, John Lennon and Paul McCartney got it right when they linked the idea of constitutional change to the processes of revolution and evolution. Inevitably, the content and character of a nation’s constitution is largely determined by the circumstances in which that nation is created. A constitution drafted along with a country’s gradual evolution toward independence will have a very different emphasis than a constitution drafted on the heels of a political revolution. The point of this article is to briefly explain how Canada’s constitution, and especially the Constitution Act, 18671, reflect the fact that our country became an independent nation through a process of evolution rather than revolution.

What Does a Constitution Do?

In order to understand how Canada’s constitution reflects our development as a nation, it is first necessary to understand the role that a constitution plays in modern society. Over the course of world history, many societies have been ruled by people who took power by force or by birthright. In these societies, laws governing the conduct of the general population were created more or less at the whim of the ruler.2 With the rise of democracy, however, came the idea that laws should reflect the public interest rather than the particular interests or idiosyncrasies of the lawmakers. In other words, in order to be legitimate in a democracy, laws must be: (1) predictable; (2) enforceable against everyone (including the people making the laws); and (3) created in accordance with defined systems which appropriately limit the power of law-makers. The notion that laws should fulfill these requirements is known as the rule of law or constitutionalism.

In its earliest days, Canada did not have a written constitution. The territory now considered Canada was populated by colonists from France and the United Kingdom and the colonists were governed by the laws of their home countries. As the territory of Canada became more populated and the United Kingdom assumed authority over both French and English colonists, however, it became apparent that some system of local law-making was required to take account of the unique, regional needs of the colonies. From the mid-1700s to the mid-1800s several laws were passed by the United Kingdom in order to establish mechanisms for governance in the colonies. These documents were steps along the way to the United Kingdom’s enactment of the British North America Act, 1867, known today as the Constitution Act, 1867. This statute united the colonies into a single Dominion of Canada and set up a system of local law-making.

The system of local law-making established by the Constitution Act, 1867 is a federal system. This means that law-making power is divided between a central or federal parliament and regional or provincial legislatures. Once again, the decision to adopt a federal law-making system in Canada is a result of Canada’s historical evolution. In large part, the decision to make Canada a federation resulted from a recognized need to accommodate the religious, linguistic and cultural interests of French-speaking Catholics in a country predominantly populated by English-speaking Protestants. Previous attempts by the United Kingdom to assimilate the French colonists had been unsuccessful and had contributed to political unrest. The constitutional solution crafted to address these problems was to create a law-making system in which the federal parliament would have authority to pass laws in relation to matters affecting the whole dominion while the provincial legislatures would have power to pass laws in relation to matters of more local, or regional, concern. In particular, the provincial authority extended to matters such as education and civil rights, which were seen as being particularly relevant to the preservation of local language, cultural and religious practices.

Finally, because the Dominion of Canada was not created on the heels of a revolution, the drafters of the constitution were not particularly concerned about the state oppression of individual rights or freedoms. As a result, unlike the constitution of the United States, the Constitution Act, 1867 did not include any express protections for human rights. Again, this was not changed until the adoption of the Constitution Act, 1982, which includes the Canadian Charter of Rights and Freedoms.

2 (Think of Yule Brenner’s performance as Ramses II in The Ten Commandments and his character’s authoritative declarations of law: “So it is written, so it shall be done.” http://www.youtube.com/ watch?v=3bQnxlHZsjY)

5 This was achieved by the Statute of Westminster. See: http://canada.justice.gc.ca/eng/pi/const/lawreg-loireg/p1t171.html

6 This was achieved by the combined effect of the Statute of Westminster and an amendment to Canada’s Supreme Court Act. For further explanation, see: http://www.jstor.org/stable/1335884.