You are here: Home / Feature Articles / 37-5: Families in Flux / What’s in a Name? Legal Issues in Changing a Child’s Name
Reading Time: 7 minutes 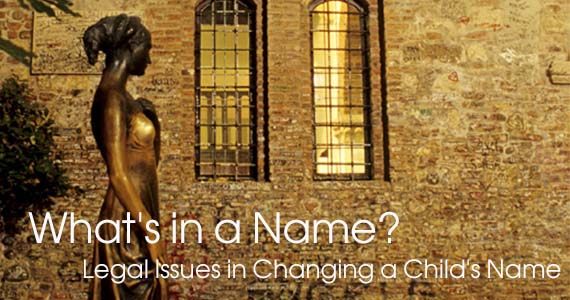 What’s in a name? That which we call a rose by any other name would smell as sweet.

Juliet might have made a convincing argument to dismiss the importance of the label of the name, yet most people see their names as being directly connected with the people that they are. It helps to shape their identity. In Canada, it’s a child’s guardian(s) who get to decide the child’s name, including the first, middle and surname of the child. Usually, parents are the guardians of a child, and guardians can make decisions for a child (including things such as deciding where a child can go to school, who the child can be in contact with, where the child lives, etc.). A name for a child is recorded shortly after birth. But what if a guardian wants to change the child’s surname later in life?

How did we get here?

Changing a child’s name seems like such a personal decision, so how do these matters end up in court? There are a lot of situations that might happen which mean that one guardian wants to change the child’s name. A divorce, a second marriage, an adoption of a child by a new spouse, a removal of one guardian, a lack of significant contact between the child and the guardian, all of these are examples of situations that end up in front of a judge. In essence, the guardians could not agree on what surname the child should have, and one parent applies to change the child’s surname even though the other guardian does not consent to the change.

Each province has a law that sets out the requirements and rules that must be followed in order to change a child’s name, and each province is different. Also, there are different rules depending on what kind of custody arrangement is in place (sole custody/guardianship or joint custody/ guardianship). Even when guardians agree on the child’s name, the guardians will still have to follow the law and register the name with Vital Statistics and show proof that everyone consents to the change. Some provinces require that a child needs to consent to the change as well, if the child is over 12 years of age. Even where the guardian has to start out with an application is different from province to province. The application could be made to the Director of Vital Statistics of the province, or to the Superior Court of the province, depending on the legislation.

Crane v. Boucher illustrates the importance of knowing the law that you are applying under. Crane was the mother and sole guardian of the child. The court ordered that the mother did not need the father’s consent to go ahead with an application, and the father did not participate in the hearing. Crane wanted to change the child’s surname to her adult interdependent partner’s surname, which is allowed under the Change of Name Act. In Alberta, common law partners are called adult interdependent partners under the Adult Interdependent Relationships Act. Given that the father didn’t appear and didn’t contest the name change, that Crane and her partner were in a committed relationship and expecting a child together, and that the court had an affidavit in support from Crane’s partner, the application may have appeared to be a shoe-in. However, the court, instead of simply relying on Crane’s scant evidence about her relationship, requested more evidence on whether the conditions to be adult interdependent partners had been met. The judge found that Crane and her partner were in fact, not adult interdependent partners because they had been living together for only two and a half years, and not three, as is required under the law. The judge refused to change the child’s name.

Before commencing any kind of application, the guardians should try to work things out between themselves. Are there alternatives that would work for their situation? So, for example, if one guardian refuses to even think about changing to a hyphenated last name for the child, could the change be that one surname becomes the middle name of the child? What if the dispute is about the order of a hyphenated last name? The mother of the child wants Smith-Jones, and the father of the child wants Jones-Smith and they’ve reached a stalemate. Well, put the names in alphabetical order, like this judge did in the 2012 B.C. case of Landa-McAuliffe v. Boland. Jones-Smith it is.

If the guardians have entered into any type of agreement or have a court order regarding the child, then the parents should look at the agreement to find out what they agreed to do if there was a dispute. If the agreement states that the parties contracted to try mediation first, before commencing an application, then in the absence of an emergency situation, the parties should follow the terms of the agreement. In the 2013 Alberta case of Pulkinen v. Munden, the judge held that the parents were bound to follow the dispute mechanism that was included in their settlement agreement, and so had to attempt mediation before bringing another application regarding the child’s name.

If the guardians haven’t made an agreement or have a court order about guardianship of the child, or guardianship is in dispute, then an application to change the name of the child is premature, according to 2012 Alberta case of Johnston v. Cunningham.

What about custody and guardianship?

When a person who has sole guardianship ends up in front of a judge because the other parent doesn’t want the name changed, then it is up to that parent (who is not consenting to the name change) to prove that the name change is not in the best interests of the child. The reason that this is important is because it will determine the evidence that the parties bring to court. Pappel v. Bergen is a Manitoba case that cannot be accessed online, but is referred to in the 2011 Manitoba case of D. S. v. C. S.

The judge refused to change a child’s name, even though the mother had sole custody of the child. The child had the surname of the father (Pappel) and the mother applied to have the child’s name changed to her new husband’s last name (Bergen). In that case, the father proved that it would not be in the child’s best interests to have a complete change of last name.

What are best interests of the child?

Wintermute v. O’Sullivan (not available online), has been adopted in Alberta by the Pulkinen case as outlining factors that the court must consider when determining if changing the child’s surname is in the best interests of the child. Pulkinen added some further factors that should be considered. Essentially, the judge must decide the following questions, keeping in mind that the welfare of the child is the primary consideration.

Courts are of the view that different last names among family members does not result in social stigma or any administrative difficulty (see Johnston v. Cunningham). Given that Canada is a multicultural country with many different types of families, judges should treat assertions by parents that a child will face prejudice or embarrassment because of having a different last name with skepticism (from Lipphardt v. Chan, 2006 ABQB 511).

If you’re thinking of changing a child’s name, or you want to fight a change of name, then a good place to start is the Vital Statistics Office in your province. You can find out from them what paperwork you will have to fill out, and what steps you will have to take.