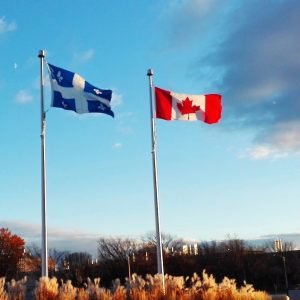 A recent LawNow article outlined the constitutional history and framework of bilingualism in Canada. In this article, we focus on Quebec’s 1977 Charter of the French Language, popularly known as Bill 101.

This legislation raised the question of whether a provincial government could broadly regulate language across its jurisdiction, namely to mandate one official language. Here we describe the decision in Quebec (AG) v Blaikie (No 1), the first of several court decisions that addressed whether Bill 101 aligned with Canada’s Constitution Act, 1867.

In the decades leading up to the 1970s, the relationship between Quebec’s French and English-speaking communities became more and more strained. When the Parti Québécois won in 1976, the long-standing language conflict reached a tense and pivotal point. Under the leadership of Premier René Lévesque, the new provincial government was determined to make Quebec a sovereign state. Bill 101 was a crucial first step towards this goal. In 1977, Bill 101 declared French to be the official language of Quebec and restricted the use of English in the public sector (courts, civil service and schools) as well as the private sector (shops and workplaces).

In 1979, three Quebec lawyers – Peter Blaikie, Roland Durand and Yoine Goldstein – challenged the part of Bill 101 which made French the sole official language of Quebec’s legislatures, courts and quasi-judicial bodies (sections 7 to 13). Bill 101 said that the government must draft legislation only in French and that only the French version was official. Lawyers, courts and other quasi-judicial bodies were to write all pleadings and decisions in French.

Section 133 further directs that Quebec legislation be printed in both languages.

In defense of Bill 101, Quebec relied on the division of sovereign powers in the same Constitution Act, 1867. Specifically, under section 92(1), provincial governments have the right to amend the “Constitution of the Province”. Quebec argued that its legislatures and courts fell within the “Constitution of the Province” so any province had the legislative power to unilaterally amend section 133 as it pertained to them. It also argued that section 133 did not explicitly require Quebec legislation to be enacted in both English and French. Sections 7 to 13 of Bill 101 simply filled in the gaps left by the Constitution Act, 1867.

The courts made their decisions in Quebec (AG) v Blaikie (No 1) entirely under the Constitution Act, 1867. (The Charter of Rights was not enacted until 1982.) At all three levels of trial and appeal, the courts ruled against the Quebec government and declared these provisions of Bill 101 unconstitutional.

In 1977, Bill 101 declared French to be the official language of Quebec …Though the Constitution Act, 1867 did not expressly require governments to enact laws in both languages, the Supreme Court of Canada concluded that this requirement was clearly implied. It reasoned that texts do not become “Acts” without enactment. The Supreme Court of Canada dismissed Quebec’s claim that this part of Bill 101 was compatible with section 133 in the Constitution Act, 1867.

The Supreme Court of Canada went on further to find that a province’s ability to modify the use of English and French in its legislatures and courts is “outside of the amending power conferred by s. 92(1)”. Administrative agencies with quasi-judicial functions operate parallel to our court system and play a “significant role in the control of a wide range of individual and corporate activities”. The Supreme Court of Canada concluded that section 133 protecting English and French in the “Courts of Quebec” extends to provincial adjudicative tribunals.

In the end, the Supreme Court of Canada struck down sections 7 to 13 of Bill 101. The result is that anyone navigating the courts and adjudicative bodies in Quebec has the constitutional right to use English or French.

In retrospect, this case is a head scratcher. Even given the sometimes convoluted and unpredictable reasoning of the modern Supreme Court of Canada, it is hard to imagine – given the precision of section 133 of the Constitution Act, 1867 – how the Government of Quebec could have constitutionally succeeded in this case.

Quebec (AG) v Blaikie (No 1) was a defeat for the newly elected Parti Québécois government. After this decision, the separatist provincial government was forced to amend Bill 101 to allow for both English and French across the legal system.

Blaikie et al argued that this French requirement directly violated section 133 of the Constitution Act, 1867.Blaikie (No. 1) is an important language rights case because it was the first shoe to drop on Bill 101. Over the next decade, people challenged other provisions in Bill 101, and the Supreme Court of Canada struck down or amended these provisions. In 1984, the Court ruled that the compulsory use of French on business signs violated Canadians’ right to freedom of speech. That same year, it also ruled that the Charter of Rights limited Bill 101’s ability to require French education in the province.

Bill 101 arguably accelerated the exit of English-speaking residents and corporations out of Quebec. Others support it as a valuable, perhaps essential, policy to ensure the survival of the French language in the Province of Quebec. This language law continues in force today, but with a more limited scope than originally intended.