You are here: Home / Special Report / 44-1: Canada as a Bilingual Country / The Constitutional Basis for Bilingualism in Canada
Reading Time: 6 minutes 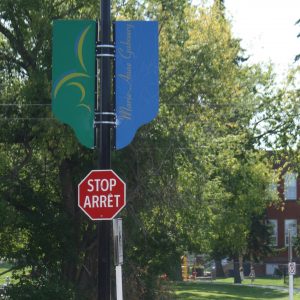 This 1867 constitutional document, sometimes referred to as the British North America Act, sets out the powers of the federal and provincial governments. Municipalities derive all their power from the provinces in which they are located.

Section 133 of the Constitution Act, 1867 addressed language rights and obligations in a very limited way. It only prescribed the language of federal and Quebec parliamentary and court proceedings:

Either the English or the French Language may be used by any Person in the Debates of the Houses of the Parliament of Canada and of the Houses of the Legislature of Quebec; and both those Languages shall be used in the respective Records and Journals of those Houses; and either of those Languages may be used by any Person or in any Pleading or Process in or issuing from any Court of Canada established under this Act, and in or from all or any of the Courts of Quebec.

The Acts of the Parliament of Canada and of the Legislature of Quebec shall be printed and published in both those Languages.

Regulating Language According to Federal and Provincial Jurisdictions

For over 100 years, Canada had no other constitutional guidance on language. In 1969, the federal government enacted the Official Languages Act, which conferred equal status on French and English in Government of Canada institutions. The Supreme Court of Canada, in Jones v AG of New Brunswick, confirmed six years later that this was constitutional – that language is important enough to the sphere of federal operations that it could be regulated under the overarching mandate of the “peace, order, and good government” of Canada.

In the 1985 case of Re Manitoba Language Rights, the Supreme Court of Canada concluded that all of the unilingual English statutes from the Manitoba legislature were and always had been invalid and of no force or effect. But what about the power of each province to likewise regulate language within the spheres of activity over which they exercise constitutional authority? In other words, it is one thing for the federal government to legislate official language status in the post office and immigration hearings. However, did each province have equivalent power to legislate language over its own provincial institutions, such as in its schools, hospitals and municipalities?

In 1977, Quebec passed the Charter of the French Language. This Act established French as Quebec’s official language and mandated that all commercial forms, invoices, receipts, signs, posters, advertising and publications be solely in French. It declared that every Quebecois had the right to communicate in French in matters of civil administration, health and social services, and business. Substantial fines and the forced removal of any non-conforming posters, signs or advertisements backed up this law.

The Supreme Court of Canada, in its 1988 decision in Devine v Quebec, found this language legislation to be within provincial competence under the “property and civil rights” head of 1867 constitutional power. The Court characterized this “not as a law in relation to language [which is not enumerated in the 1867 Constitution], but as a law in relation to the institutions or activities that the provision covers”. The Court determined that language is not an independent matter of legislation but is rather “ancillary” to the province’s exercise of its power over the subject matter assigned to it (in this case, public administration and commerce).

Provincial language legislation must relate to an institution or activity that is within provincial jurisdiction. This prevents governments from over-reaching and creating laws for institutions and activities that they do not govern. The Supreme Court of Canada reaffirmed this principle a decade later in the Reference re Succession of Quebec case. In that case, the Court echoed the “autonomy of provincial governments to develop their societies within their respective spheres of jurisdiction”.

The Manitoba Act, 1870 was a constitutional statute that created the Province of Manitoba. It also gave rights to the Métis, including bilingual institutions. Section 23 accorded French and English equal status for “Acts, records and journals” in the legislature. Nevertheless, Manitoba enacted its own Official Languages Act in 1890, which appointed English as the only language for legislative processes.

Provincial language legislation must relate to an institution or activity that is within provincial jurisdiction. In the 1985 case of Re Manitoba Language Rights, the Supreme Court of Canada concluded that all of the unilingual English statutes from the Manitoba legislature were and always had been invalid and of no force or effect. The Court reasoned that the constitutional duty in Manitoba – about the manner and form of enacting legislation – protected the substantive rights of all Manitobans to equal access to the law in either French or English.

The sudden declaration of invalidity of all of Manitoba’s legislation “would create a legal vacuum with consequent legal chaos” and destroy the rule of law. The province would be left with “an invalid and therefore ineffectual legal system until the Legislature is able to translate, re‑enact, print and publish its current laws in both official languages”. Therefore, the Court granted the laws temporary validity until the government could translate and re-enact the laws in both languages. Seven years later the Court was still negotiating extensions of time with Manitoba.

Charter of Rights and Freedoms

As has been shown, until the Constitution Act, 1982 (also known as the Charter of Rights and Freedoms or the Charter), the Canadian Constitution did not comprehensively engage the language issue. The Charter explicitly addressed language rights in detail in sections 16 through 23 as well as implicitly in section 2 as “freedom of expression”. Most of these provisions copy and clarify the existing 1867 obligations (and add New Brunswick to the list of bilingual provinces) and entrench the principles of the federal Official Languages Act. (A thorough review of these rights is beyond the scope of this article.) There have been challenges and elaborations on many fronts, including language in education and law courts across Canada.

Much of the post-1982 Charter focus has been on Quebec’s Charter of the French Language (known also as Bill 101). This Act endeavours “to make French the language of government and the law [in Quebec], as well as the normal and everyday language of work, instruction, communication, commerce and business” (preamble).  It has, on several occasions, attracted the attention and analysis of the Supreme Court of Canada, including in two companion cases in 1988: Ford and Devine.

The Charter sets out the language rights of Canadians in their public education. They enjoy constitutional rights to receive primary and secondary schooling in French or English, depending on which language they have first learned and understood. French-Canadians must be offered French schooling for the entirety of their basic education while English-Canadians are offered the same in English.

Today Canada is one of 55 bilingual countries around the world. Our Constitution establishes and protects bilingualism and gives the various levels of government power and responsibility over language and language rights to all Canadians.