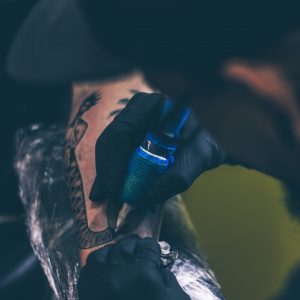 Tattooed celebrities are abundant; from Shawn Mendes’s fan-designed butterfly, to Drake’s “6 God” praying hands, to the elaborate artwork displayed on the bodies of professional athletes like basketball star LeBron James (by one account more than half of all active NBA players have tattoos) — the list goes on. Whether it’s angels or demons, expressions of faith, or names of family and friends who’ve been loved or lost, there’s no doubt a celebrity’s body art is an integral part of their personal brand, appearance and public identity.

It may be surprising to some that tattoo art, like other forms of art, is capable of attracting copyright protection. In Canada and the U.S., if a tattoo is an original work of art (not copied), is fixed in any tangible medium (e.g., inked on skin), and is not in the public domain, then it qualifies for copyright protection. Although there has been some legal debate as to whether the human body is considered a “fixed medium” for copyright law purposes, generally speaking, and as noted by the U.S. federal court in Whitmill v. Warner Bros. Entertainment Inc. (the case that dealt with Mike Tyson’s tattoo in The Hangover movie), “[o]f course tattoos can be copyrighted … I don’t think there is any reasonable dispute about that.”

Since copyright laws generally grant the owners of artistic works the sole right to control the use and reproduction of their works in all media (subject to some limited exceptions, including those noted below), any unauthorized use or reproduction of a celebrity’s tattoo in an e-sports game (e.g., NBA 2K20), movie (e.g., The Hangover), or other media may result in a copyright infringement claim — not to mention a trademark, publicity or personality rights claim, depending on the circumstances.

… any unauthorized use or reproduction of a celebrity’s tattoo … may result in a copyright infringement claim …When it comes to video games specifically, tattoo artists have sued celebrity athletes and game publishers for reproducing the tattoos of, for example, former NFL player Ricky Williams in the Electronic Arts’s sports title, NFL Street, and welterweight fighter Carlos Condit in the THQ game UFC Undisputed 3.

Take-Two argues its use of the tattoos was de minimis since the tattoos were not prominently featured in the game, which also includes 400 other NBA players. And, in any event, Take-Two says its use of the images should qualify as “fair use” since it would be impossible to realistically portray the individual NBA players unless their video game avatars capture their distinct tattoos and uniquely personal body art.

… there has been some legal debate as to whether the human body is considered a “fixed medium” for copyright law purposes …Interestingly, Take-Two relies in part on a declaration of support filed by James stating he personally contributed to the creative design of his tattoos, his tattoos are part of his “persona and identity,” and any reproduction of his image without his tattoos is not really a depiction of him. James reasoned that any use of his image, without his tattoos, undermines his publicity rights and deprives him of the right to license (and control) his own body and what he looks like as both a private person and a public basketball player.

James’s declaration raises some fascinating legal issues. Is he a “joint author” of his tattoos? Were his tattoos created as “works-made-for-hire” so that under U.S. copyright law James would be deemed the author and owner of the tattoos? Alternatively, does he have an “implied licence” to use his tattoos any way he wants? What about his right to protect his personal liberty and freedom of expression?

As fascinating or frustrating as these issues may be (depending on your standpoint), avoiding this legal complexity with a reliable degree of certainty is simpler than it may seem.

Obtaining the necessary rights and releases from those who own, create, collaborate on or display tattoos can be as simple as selecting a few carefully crafted sentences and ensuring the parties “get it in writing.” For example, instead of relying on de minimis and fair use defences, a game publisher could license the necessary rights to reproduce the tattoos from the tattoo rights holder to help alleviate this uncertainty.

… tattoo art, like other forms of art, is capable of attracting copyright protection.Similarly, a licence or release from a tattoo artist in favour of a celebrity athlete could simply state: (i) the tattoo is original (not copied), (ii) the artist owns or controls all rights (including copyrights) in the tattoo, (iii) the celebrity is allowed to use and reproduce the tattoo in any manner or media without restriction, and (iv) the artist waives all so-called “moral rights” in the tattoo. The waiver of moral rights is important as it will give the celebrity the flexibility to modify, enhance or remove the tattoo altogether, with or without crediting the original tattoo artist.

In the wake of the recent ink cases and as body art continues to become more mainstream, celebrities — and anyone who licenses or makes commercial use of their images — should take legal precautions to protect their interests in the celebrity’s personal brand and likeness, especially when pre-emptive and preventative action can be as simple as noted above.

Editor’s Note: After this article was originally published, a decision was released in Solid Oak Sketches, LLC v 2K Games, Inc and Take-Two Interactive Software, Inc (case number 16-CV-724-LTS-SDA). In the decision handed down on March 26, 2020, the court held that the Defendants did not violate Solid Oak’s copyright rights because:

This article first appeared in The Lawyer’s Daily on February 25, 2020 and is reprinted with permission.