You are here: Home / Feature Articles / 45-1: COVID-19 / COVID-19 Tracing Apps: Are they secure enough to protect the right of privacy?
Reading Time: 5 minutes

It is almost impossible to know somebody who does not have a smartphone they use for almost every purpose: to send e-mails, to search for a new apartment or to navigate using the map features. The technology seems limitless. If a new problem arrives, technology can present an answer or an effective resolution.

For this reason, the uncertainty created by the coronavirus has led governments to find new technological ways to try to control the spread of the disease. As a result, smartphone apps were created to help track people’s movement and consequently help the government to manage this new catastrophic and unpredictable situation. 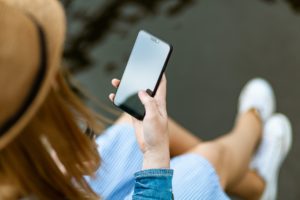 Photo by GiftPundits.com from Pexels

As an example of this, Alberta’s government launched in May the ABTraceTogether app to improve contact tracing. As explained by the government, the app uses a phone’s Bluetooth to log anytime it comes within two metres of another person with the app for more than 15 minutes. Also, more recently at the end of July, the federal government launched the COVID Alert app. First launched in Ontario, the app alerts Canadians when they have contact with someone who has tested positive for COVID-19.

Although it is undeniable that smartphones have revolutionized the way that people behave in this decade, it is also evident that all of this technology raises another relevant issue. The uncertainty about privacy and protection of personal information seems to be an immediate consequence of the increased use of technology. Concerns about the safety of the information stored can hinder people from downloading these new apps.

How do these new apps work?

Both apps mentioned above work in a similar way: the app uses Bluetooth technology to log and exchange codes with phones that are nearby. Your app will be able to detect everyone who you have been close to and who has downloaded the app. If a person eventually tests positive for COVID-19, the government will be able to trace and contact everyone who was recently in contact with the infected person.

But I must emphasize: As explained by the Alberta government, the infected person must allow the government to access all the data collected by the ABTraceTogether app before the government contacts anyone. Without this consent, the encounter history data will not be shared with the government.

Is it mandatory for people to download these new apps?

The answer to this question is short and simple: no, it is not. No one in the country is obliged to download the apps launched by the provincial and federal governments. Downloading and using the apps are voluntary and depend on your personal preferences. However, people are encouraged to download the app because it has been shown to be an effective measure to help stop the spread of COVID-19.

Should people be worried about the government retaining personal information?

No one in the country is obliged to download the apps launched by the provincial and federal governments.As reported by the provincial and federal governments, people should not be worried about the government retaining any type of personal information. First of all, the app does not use or access any location data or GPS. This means the app will not be able to track the user’s location or contacts. As emphasized by Alberta’s Chief Medical Officer of Health, phones with the app detect each other and exchange anonymous encrypted data. No personal information is uploaded or shared with the government.

According to the official website, the COVID Alert app launched by the federal government has no way of knowing:

In Peace Country Health v UNA, 2007 CarswellAlta 2612, the court expressly stated that privacy is not only one of the values underlying the protections in the Canadian Charter of Rights and Freedoms, but it is also a fundamental Canadian value.

Although the Canadian Charter of Rights and Freedoms does not specifically mention privacy or the protection of personal information, sections 7 and 8 afford protection to these rights:

Life, liberty and security of person

7. Everyone has the right to life, liberty and security of the person and the right not to be deprived thereof except in accordance with the principles of fundamental justice.

8. Everyone has the right to be secure against unreasonable search or seizure.

Even in times where collective consciousness should be a priority to prevent spread of the disease, the government must respect individuals’ privacy rights. To ensure this protection, the government is taking all possible measures, including reassuring that the only information exchanged between phones is a random ID that is non-identifying.

How many people have downloaded the apps?

… phones with the app detect each other and exchange anonymous encrypted data.Although the government has made a lot of effort to assure people that the apps are secure, most Canadians still have not downloaded them. Initially, in Alberta, health officials expected that at least twenty per cent of the population would join the app. That number would be enough for the app to be effective.

But after seven weeks, no more than five per cent of the Alberta population had joined the ABTraceTogether app. On the other hand, the app launched by the federal government appears to have been better accepted. In less than twenty days, almost two million Canadians have downloaded it.

This number represents almost four per cent of the Canadian population. Considering that the app is only operational in Ontario right now, this percentage should increase across Canada as soon as other provinces start using the COVID Alert app.

Overall, it is reasonable to say that tracing apps can benefit the country without contravening privacy rights, considering that:

Carolina Albuquerque is a lawyer who graduated in Brazil. She moved to Calgary and is enrolled in the law program at the University of Calgary. She is also involved in volunteer programs that provide support for women.