A Website of The Centre for Public Legal Education Alberta
You are here: Home / Feature Articles / 39-1: Looking at Criminal Law / How Criminal Records and Police Reports can Ruin Your Travel Plans 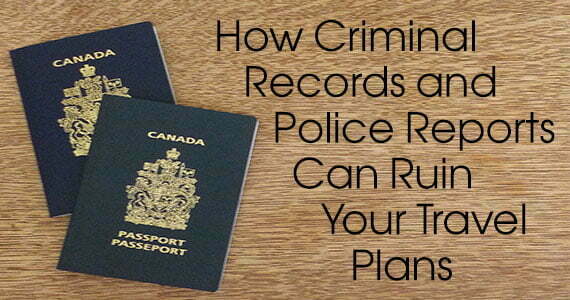 There’s a reason why Canadian passports are in high demand with international criminals and forgers. Our record of good international relations, history of peacekeeping and foreign aid, and the generally good perception of Canadians gives our passport holders easy entry to more countries than just about any other passport in the world. Fortunately, the federal government continues to improve passport security precautions to discourage misuse. Before they leave, travellers need to talk to the embassies, consulates and offices that represent the countries they want to visit to learn more about entry restrictions. Newer passports have built-in integrated circuits and a warning to treat your passport as an ‘electronic device’. But even if you’re lucky enough to have a legitimate Canadian passport, it does not guarantee your right to travel out of the country, especially if you have a criminal record – and especially to Canadians’ favourite destination, the United States.

Travelling Overseas with a Criminal Record

While any country you visit can stop you from entering for any reason it chooses, the vast majority understand the importance of maintaining a healthy tourist industry, strong business connections and good international relations and they usually give permission to enter to most people who request it. But regardless of your reason for travelling, a criminal record can put a quick, unexpected and inconvenient halt to your plans. Every country has its own guidelines and rules about who can enter. For many, a criminal record isn’t an absolute barrier to entry, but they will exercise discretion based on certain criteria, including the type of offence and how long ago it was committed. Before they leave, travellers need to talk to the embassies, consulates and offices that represent the countries they want to visit to learn more about entry restrictions. To give you an idea of what to expect, here’s a brief list of some of the guidelines the Canada Border Services Agency (CBSA) uses to determine admissibility for visitors with a criminal record:

Traveling to the U.S. with a Criminal Record

If you don’t tell them, how does the U.S. CBP know you have a record?

The close relationship between the two countries, especially in the fight against terrorism, has resulted in the CBP having access the RCMP’s National Repository of Criminal Records, which lists every criminal record holder in Canada. A CBP officer only has to enter your name or scan your passport to find out whether you have a record.

Access to the RCMP’s Criminal Record database also gives CBP access to police reports from across the country. The unfortunate result for many travellers is that they are unexpectedly detained at border crossings and/or barred from entering the U.S., even when they have no criminal record or have never been charged with an offence. As reported by the CBC, in June, 2012, a woman was told by CBP that the only way she would be allowed into the U.S. to catch a flight, which she later missed, was to get an independent doctor to vouch for her. Why? A 911 call to police that preceded a stay in hospital for clinical depression was recorded in a police report which was found by CBP during a background check. Police did not visit the woman’s home after the call, no charges were laid, no conviction, no criminal record. Unless you ask your local police service or the RCMP, it is impossible to know if your name is included in a police report. If you have a criminal record, or if you have even the slightest idea that your name may appear in a police report, for example, if you gave a statement following a traffic accident that involved negligence – it is best to contact police and/or the CBP before travel to the U.S. to confirm that you’ll be able to enjoy free passage.

Article Sources: Embassy of the United States, Government of Canada

Stephen Da Cambra is a content contributor for Pardon Applications of Canada, a Canadian pardon and U.S. waiver application processing firm serving Canadians across the country.