A Website of The Centre for Public Legal Education Alberta
You are here: Home / Feature Articles / 42-1: Wills and Estates / Death and Taxes – When the Certainties Collide
Reading Time: 6 minutes 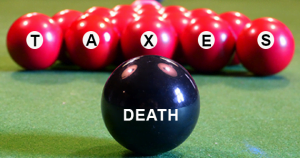 As the cliché goes, the only certainties in life are death and taxes. When the former occurs, the Personal Representative(s) (formerly known as the Executor(s)) of the Estate must address the latter. Taxes become more complex in the year of death, and the period of Estate administration. This article provides a brief overview of some common issues.

Returns to be Filed

The Personal Representative must file the deceased’s terminal (final) return. This return includes the deceased’s regular income from all sources from January 1st to the date of death, like a typical tax return. It is due on the later of the usual filing deadline (April 30 for most individuals) or six months after the date of death (e.g. June 15, 2018 for an individual passing away on December 15, 2017).

Income earned subsequent to death is taxable to the Estate, which is considered a Trust for tax purposes. The final return must include most income accrued to the date of death.  For example, income on term deposits and similar investments are normally taxable when received.  However, the income must be accrued to the date of death.  For example, assume Charlie invested $10,000 in a one year Term Deposit bearing 1% interest on October 1, 2016, maturing September 30, 2017.  He died on June 30, 2017.  His final return should include interest of $75 ($10,000 x 1% x 273/365 days to June 30).

For an individual with many investments, determining the amounts to report can require considerable analysis.

The general rule is that a deceased person is deemed to have disposed of all of their property at fair market value (FMV) on the date they die.  The income tax consequences in regards to this rule depends on the type of property that is held by the deceased.  Even though there was not an actual sale, there will be a capital gain (or loss) or full income inclusion, depending on the nature of each asset, resulting from this deemed disposition.  The FMV becomes the cost to the Estate, or the beneficiary.

It would not be tax without exceptions to the general rule:

Generally, assets must be transferred to the spouse or to a trust with very specific terms to benefit from the rollover, which is beyond the scope of this article.

Careful consideration is required when designating specific beneficiaries to receive specific assets – any tax is paid from the remainder of the Estate, not the recipient of the specific bequest.

This can be problematic if the deceased has named a designated beneficiary (DB).  The full value of the account goes directly to the DB, while the taxes must be paid from the Estate’s other assets.  There have been cases where the taxes eliminated the Estate or even exceeded the other Estate assets.  The Canada Revenue Agency (CRA) can collect any excess from the DB, but the Estate has no similar right to recover these taxes.

Once again, exceptions to the general rule exist:

Again, this is a simplified description of many complex provisions.

The general rule is that a deceased person is deemed to have disposed of all of their property at fair market value (FMV) on the date they die.  While the value of the plan is, outside these special circumstances, taxed on the final return, any further growth is taxed to the Estate or its beneficiaries when the funds are received.  Where the value declines from the date of death to the date the account is cashed out, a deduction for the shortfall can normally be claimed to reduce the income on the final return to the funds actually recovered.

Further complexities can arise when these plans are not cashed out by December 31 of the year following the year of death (for example, by December 31, 2018 for an individual who passes away any time in 2017).

A true pension plan is treated differently with lump sum payouts being income of the Estate.

One Return is Required – More May be Possible

Additional tax returns can sometimes be filed in the year of death.  Certain types of income which have been earned, but not received, at the date of death (referred to as “Rights & Things”) are reported on the final return by default, but can instead be reported on a second tax return if the Personal Representative so elects.  Common Rights & Things include:

Including these items on a separate income tax return subjects income to a second set of marginal tax rates and personal credits, rather than adding it to the final return.  This normally reduces the taxes payable on these amounts.  It is also possible to transfer Rights & Things to beneficiaries so that they will pay the tax when the funds are received.

What Next? Estate Tax Returns

Income earned subsequent to death is taxable to the Estate, which is considered a Trust for tax purposes. Its tax year begins on the date after death, and can end on any date no later than one year after the date of death. The Estate is taxable at the same marginal income tax rates as an individual for up to three years. After that, any income is taxed at the highest personal tax rate (48% in Alberta), and a calendar year-end must be adopted.

A common source of Estate income is the CPP death benefit.  Depending on the assets of the deceased, an estate could have many other sources of income.  Pension and investment income are common.

Depending on the assets of the deceased and the estate, elections and complex planning strategies may be available to reduce tax costs.  As one example, it is possible to elect that some losses realized in the Estate’s first tax year be claimed on the deceased’s final tax return.

Taxes can be complex for anyone – taxes for deceased persons and Estates can be even more complex.  Personal Representatives can be personally liable for unpaid taxes.  This article provides only a brief overview of the more basic tax issues – obtaining professional advice is generally wise.