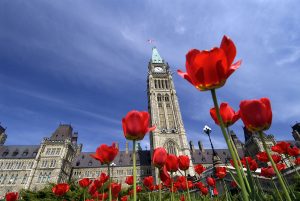 Canada is a “constitutional monarchy,” which is a form of government where monarchs act as the political heads of state but their powers are kept within the boundaries of that country’s constitution. [1] In Canada, the monarch is the Queen. At the time of Confederation, the Constitution Act, 1867 (then called the British North America Act), as well as other documents and unwritten conventions adopted over time, set out who would be involved in government and how it would work.  As a former colony of Britain, Canada inherited a British style of governance called the Westminster system. Thus, Canada’s system of governance has three branches: the executive branch, the legislative branch, and the judicial branch.

The judicial branch interprets and applies the law and sometimes provides an advisory opinion to a government, on a major legal issue, when asked.The first branch of Canada’s political system is the executive branch. This is the decision-making branch made up of the monarch as the head of state and the Prime Minister, as head of government, and his or her Cabinet. [2] In Canada’s early history, the British monarch ruled the area from its Parliament in London until Canada became a country in 1867 and implemented its own constitution. The monarch then became a symbol of unity, authority and allegiance in Canada, [2] a figure who holds significant symbolic power but little political decision making power.

The monarch’s role is outlined in Part III of the Constitution Act, 1867. Section 9 vests authority in the monarch. Sections 38 to 49, also known as the amending formula, instruct that any change to the position of the monarch or his or her representatives in Canada requires the consent of the Senate, the House of Commons, and the legislative assemblies of all the provinces. The monarch is also symbolically responsible for executive functions such as giving royal assent to bills passed in the House of Commons and Senate or reading the federal government’s agenda at the start of each new session of Parliament (called the Speech from the Throne).

The Governor General is also responsible for dissolving Parliament before an election and may even “prorogue” or end a parliamentary session if necessary. A recent example of proroguing occurred in 2008 when Prime Minister Stephen Harper asked then-Governor General Michaëlle Jean to prorogue parliament after the party in opposition, the Liberals, attempted to form a coalition government with the New Democratic Party and the Bloc Quebecois. After careful consideration and consultation with constitutional experts, Jean decided to honour the Prime Minister’s request. This is an example of how executive power ultimately resides with the monarch.

The Prime Minister and Cabinet

The judicial branch of government interprets and applies the law. It includes judges and the courts and operates independently from the other branches of government.After a federal election, the leader of the political party with the most seats in the House of Commons becomes the Prime Minister. The Prime Minister advises the Governor General on matters concerning the country’s governance and how he or she may proceed symbolically with executive matters. The cabinet is appointed by the Prime Minister from the large body of party Members of Parliament to advise him or her on these matters and help run the government. Section III of the Constitution Act, 1867 refers to the cabinet as the Queen’s Privy Council, although the term cabinet is not used.

The federal legislative branch of Canada’s government makes the laws of the country. This branch is formally known as the Parliament of Canada and includes the monarch, the House of Commons, and the Senate. As in Britain, Canada has a “bicameral,” or two-house system, an integral feature in a constitutional government. In Canada, the lower house is known as the House of Commons and the upper house is known as the Senate. When the British colonies were established in North America at the beginning of the 16th century, colonial assemblies were bicameral because there were two interests to be represented: the mother country by the governor in council, and the colonists by their chosen deputies. [4] Early Canadians preferred a bicameral system because they believed it avoided the creation of hasty and harsh legislation, ensured deliberation in government, and was best able to promote the interests of democracy. The bicameral tradition has continued into present day.

At the federal level, the House of Commons is the first house of legislation in the bicameral system. It is also called the lower house of Parliament. The House of Commons’ structure and role are outlined in sections 37 to 52 of the Constitution Act, 1867. This House is responsible for introducing, voting on and adopting laws and proposals for taxes and revenues. The members of this house, or Members of Parliament (MPs), belong to different political parties and they are elected by the people of Canada. There are currently 308 MPs, but the number can grow as the population increases. According to section 40, House of Commons seats are distributed according to the proportion of Canada’s population residing in the various provinces and territories. And according to section 50, a House may not sit longer than 5 years.

The federal legislative branch of Canada’s government makes the laws of the country. This branch is formally known as the Parliament of Canada and includes the monarch, the House of Commons, and the Senate. The Senate is the upper house of Parliament. It was created as a place of “sober second thought” to carefully examine legislation before it becomes law. It is made up of 105 members that are appointed by the Governor General, on advice of the Prime Minister, based on regional representation and other individual requirements. Senators are not elected. The Constitution states that senators are to be appointed based on regional representation and that they must meet specific requirements. Twenty-four senators must be from each of Ontario, Quebec, the Maritimes and the western provinces. Six senators are to be appointed from Newfoundland and one senator is to be appointed from each of the three territories. A senator must be a Canadian citizen and be at least 30 years old, own land worth at least $4,000 and, in the case of Quebec, own land within the province. Senators must have at least $4,000 and live in the province or territory they represent. Senators usually affiliate with a political party although some may choose to sit as independents.

The Constitution defines the scope of the Senate’s role and powers in sections 21 to 36. In 2014 the Supreme Court of Canada advised the federal government in Reference Re Senate Reform that significant changes to the Senate require constitutional amendments and that these amendments would require the use of the amending formula.

The judicial branch of government interprets and applies the law. It includes judges and the courts and operates independently from the other branches of government. Courts operate at both federal and provincial levels. The federal courts include the Supreme Court of Canada, the Federal Court of Canada (Trial Division and Appellate Division), and the Tax Court. The provincial courts include the superior courts or courts of appeal in each province or territory.

The courts deal with all manners of law in Canada including Aboriginal law, administrative law, contract law, constitutional law, criminal law, property law, and tort law. Judges interpret legislation and have the power to strike it down. A government may also ask the court for advice on a major legal issue. This is known as a reference question. According to the Constitution, appointment of judges to provincial superior courts (trial or appellate) is made by the Governor General. In practice, the Governor General appoints judges based on the advice of the Prime Minister and his or her cabinet. Appointments to provincial courts are made by the Lieutenant Governor of each province on the advice of the provincial government.

Appointments to the federal courts (Federal Court of Appeal and Federal Court Trial Division) that have jurisdiction for all of Canada are made by the Governor General on the advice of the government. Appointments to the Supreme Court of Canada are governed by the Supreme Court Act. It explains who may be appointed to the Supreme Court of Canada: “Any person may be appointed a judge who is or has been a judge of a superior court of a province or a barrister or advocate of at least ten years standing at the bar of a province.” Section 6 then discusses the qualification of appointees from Quebec: “At least three of the judges shall be appointed from among the judges of the Court of Appeal or of the Superior Court of the Province of Quebec or from among the advocates of that Province, [6.1] … if, at any time, they were an advocate of at least 10 years standing at the bar of that Province.” The issue of appointment of Supreme Court judges from Quebec was an issue in Reference Re Supreme Court.

Each branch of Canada’s government serves a specific role. Canada’s Constitution outlines the structure of how these branches should operate and how they should work together to serve the country’s citizens.

Finally, the judicial branch includes the courts and judges at both the federal and provincial levels. Although judges are appointed by the Governor General on the advice of the Prime Minister, the judiciary acts independently from the executive branch. The judicial branch interprets and applies the law and sometimes provides an advisory opinion to a government, on a major legal issue, when asked.

Together, Canada’s branches of government provide an integral framework that guides the democratic governance of the country.

This article was originally published on April 2, 2015 by the Centre for Constitutional Studies and is reprinted with permission.

Lorraine Snyder is a law student at the University of Alberta.

About Dustin Martin
The Centre for Public Legal Education respectfully acknowledges that we are located on Treaty 4, 6, 7, 8 and 10 territories, the traditional lands of First Nations, Métis, and Inuit.