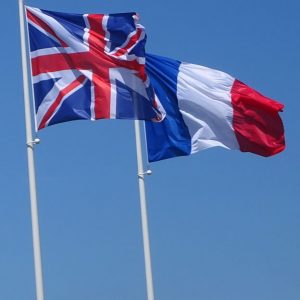 Canada has two official languages: French and English. We always wonder why.

Canada’s two colonizing peoples are the French and the British. They controlled land and built colonies alongside Indigenous peoples, who had been living there for millennia. They had two different languages and cultures. The French spoke French, practiced Catholicism, and had their own legal system (civil law). The British spoke English, practiced Protestantism, and followed a common law system.

The British controlled parts of what is now Newfoundland. The French existed in the Maritimes (modern-day Nova Scotia, New Brunswick and Prince Edward Island) and Québec.

The French colonized Canada first. However, the British took over all French colonies in the Maritimes and Québec through different wars, including the Queen Anne’s War (1702-1713) and the Seven Years’ War (1756-1763). As a result, the British managed these territories politically, but the French dominated them culturally. That was a matter the British had to deal with. People in those colonies spoke French and followed French religious and legal practices (see: Official Bilingualism in Canada: History and Debates) [Official Bilingualism in Canada]).

In Québec, the British decided to authorize French culture and language but within British control. The British passed the 1763 Royal Proclamation. This action forced British law and practices on British colonies in North America, including those with large French populations. However, in 1774, the British enacted the Québec Act, which overturned this practice. This Act guaranteed the practice of the Catholic faith in Québec and allowed French civil law in private matters. In matters related to public administration, such as criminal prosecution, the common law system applied (see: Official Bilingualism in Canada).

The first Official Languages Act’s purpose was not to ensure that every Canadian spoke both English and French.In 1841, the Act of Union recognized that both the British and the French existed side-by-side but with the intention that French Canadians would eventually integrate into the British culture. The intention was that religious, cultural and legal dualism would be only temporary. This perception, based on the Durham Report, introduced a British parliamentary system including in Québec, but it could not banish the French language and the Catholic religion (see: Cultural Duality).

Following that, the federal government enacted many laws to preserve both languages. In 1867, the year of Confederation, the British Parliament passed the British North America Act (now the Constitution Act, 1867). This Act united three British colonies – Nova Scotia, New Brunswick and the province of Canada (Ontario and Québec) – as the “Dominion of Canada”. The Act allowed for other British colonies in North America to be admitted as well. With that came the idea that English and French-speaking communities should exist side-by-side and complete each other:

The Constitution Act of 1867 (formerly known as the British North America Act) established English and French as legislative and judicial languages in federal and Québec institutions. It also set out the right to denominational schooling, which at that time was closely associated with the anglophone (Protestant) and francophone (Roman Catholic) linguistic and cultural traditions. (See: Bilingualism.)

Either the English or the French Language may be used by any Person in the Debates of the Houses of the Parliament of Canada and of the Houses of the Legislature of Quebec; and both those Languages shall be used in the respective Records and Journals of those Houses; and either of those Languages may be used by any Person or in any Pleading or Process in or issuing from any Court of Canada established under this Act, and in or from all or any of the Courts of Québec.

The Acts of the Parliament of Canada and of the Legislature of Québec shall be printed and published in both those Languages.

In 1969, the federal government passed the first Official Languages Act on the recommendation of the Royal Commission on Bilingualism and Biculturalism. It proclaimed French and English as the official languages of Canada. According to this Act, all federal institutions must provide services in French or English, depending on the requested matter. In order to manage its implementation, the Act created the Office of the Commissioner of Official Languages (see: Official Languages Act (1969)).

The first Official Languages Act’s purpose was not to ensure that every Canadian spoke both English and French. The aim was to offer federal services to Canadian citizens in the official language of their choice. Those services were to be available in the requested language without any delay and were to be of equal quality, regardless of the chosen language (see: Understanding Your Language Rights).

The Official Languages Act is a federal act and applies only to federal institutions. It does not apply to provincial and territorial governments.One year later, in 1970, the federal government established the Official Languages in Education Program. This program provides provinces and territories funding for second language instruction and minority language education in both English and French. Besides this program, federal, provincial and territorial governments have also embraced French immersion education programs. In these programs, students receive most of their education in the French language (see: Official Bilingualism in Canada).

Moreover, to ensure that all Canadians can read and understand product packaging, the federal government enacted the Consumer Packaging and Labeling Act in 1974. This Act requests that consumer products sold in Canada be labelled in both English and French.

In 1982, the Charter of Rights and Freedoms recognized language rights. Section 16 of the Charter acknowledges that English and French are the official languages of Canada. Both languages have equal status and equal rights and privileges as to their use in all institutions of the Parliament and Government of Canada. Sections 17, 18 and 19 state that English or French are to be used in any debates and in the proceedings of Parliament, in parliamentary papers, and in court established by Parliament. Section 20 deals with the use of English or French in communications between federal institutions and members of the public. Section 23 talks about minority language education rights for English-speaking children in the province of Québec and French-speaking children in the rest of Canada.

(a) ensure respect for English and French as the official languages of Canada and ensure equality of status and equal rights and privileges as to their use in all federal institutions, … ;

(b) support the development of English and French linguistic minority communities … ; and

(c) set out the powers, duties and functions of federal institutions with respect to the official languages of Canada.

In 2005, the Government of Canada amended Part VII of the Official Languages Act. This part requires all federal institutions to take positive actions to promote the acknowledgment and use of both English and French in Canadian communities (see: Archived – Perspectives of Canadians of Diverse Backgrounds on Linguistic Duality).

In 1841, the Act of Union recognized that both the British and the French existed side-by-side, but with the intention that French Canadians would eventually integrate into the British culture.The Official Languages Act is a federal act and applies only to federal institutions. It does not apply to provincial and territorial governments. Therefore, each of Canada’s provinces and territories has adopted its own official language policy. Québec is the only province that acknowledges French as its sole official language. New Brunswick is the only bilingual province where both English and French are official languages. In other provinces and territories where English is the main working language, they provide government services in French as well as Aboriginal languages (see: Language in Canada).

The government enacted the laws described above in order to protect language rights and ensure that all Canadians are treated equally. However, having two official languages does not mean that every Canadian must speak both languages. It means that all federal services must be offered to Canadian citizens in both French and English. Bilingualism is one of Canada’s core values of inclusiveness and diversity. Canadians have recognized that diversity is a strength that has encouraged openness toward other peoples. And because of bilingualism, Canada is a more welcoming country for immigrants and refugees from different cultures and ethnic backgrounds.