You are here: Home / Special Report / 40-4: The Truth and Reconciliation Commission / Era of Reconciliation: A Sacred Relationship
Reading Time: 5 minutes 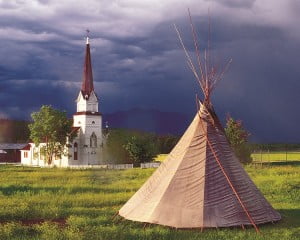 The truth be told, Canada’s dealing with its Indigenous populations has a dismal historical record. The Truth and Reconciliation Commission has faced this issue head on. In its report, it states:

What is beyond dispute is that we as Canadians have now entered into the “Era of Reconciliation”. Not only did the Truth and Reconciliation Commission wrap up its work, it handed the Report, along with 94 recommendations, to the newly elected Government of Canada, which is led by a majority government under the Liberal Party of Canada.

Justin Trudeau was true in form and spirit to attend personally at the Truth and Reconciliation Commission “handing over” ceremony. Moreover, his mandate letters to his newly appointed Ministers as well as his public commitment make clear that all 94 of the recommendations are to be implemented and that the first order of business is implementing the United Nations Declaration on the Rights of Indigenous Peoples.

Honourable Prime Minister Justin Trudeau stated on APTN national television on 15 October 2015, that, “As a first order of business the Liberal Party of Canada in government will implement the United Nations Declaration on Indigenous Rights.” He also said in his victory speech, “You want a Prime Minister that knows that a renewed nation-to-nation relationship with Indigenous peoples that respects rights and honours treaties must be the basis for how we work to close the gap and walk forward together”. This walking forward together is like the two-row wampum: two canoes going in the same direction, side by side, that is what our nation-to-nation relationship needs to be.

There are two aspects to the work of the Truth and Reconciliation Commission. First, the Truth aspect acknowledges the past: it is the facts, it is what is in the Report, it is the history and it is what it is. Nothing can change our past. The second aspect is Reconciliation going forward. Reconciliation has often been suggested by the courts in Aboriginal title litigation. At times like these, the words of the late Chief Justice Antonio Lamer of the Supreme Court of Canada are recalled when he said in the Delgamuukw case:

… Ultimately, it is through negotiated settlements, with good faith and give and take on all sides, reinforced by the judgments of this Court, that we will achieve … a basic purpose of s. 35(1) — “the reconciliation of the pre-existence of aboriginal societies with the sovereignty of the Crown”. Let us face it, we are all here to stay.

The direction from the courts is to negotiate instead of litigate. It is this second aspect in which the work must begin, it is what stands before all of us now.

Some children never returned to their home communities. They simply vanished, like the many missing and murdered indigenous women in Canada.There is one thing that is certain now: Canada is at a turning point. The official stance now is that we are on a nation to nation basis:i.e. Canada and First Nations. It is indicative of a partnership, it is indicative of the vision of the two-row wampum, it is indicative of the kind of vision that the Indian chiefs had in 1911 when they wrote to then Prime Minister, Sir Wilfred Laurier.

What is often referred to as the “Memorial to Sir Wilfred Laurier” is basically a petition letter signed by many of the chiefs of British Columbia, in unity, in seeking reconciliation, in seeking what was originally always said to them when the land became colonized, and that is we will share the land equally:

These people wish to be partners with us in our country. We must, therefore, be the same as brothers to them, and live as one family. We will share equally in everything—half and half—in land, water and timber, etc. What is ours will be theirs, and what is theirs will be ours. We will help each other to be great and good.

There is one thing that is certain now: Canada is at a turning point. The official stance now is that we are on a nation to nation basis:i.e. Canada and First Nations. Residential schools were the way of the 20th century for Indian children. Indians were practically confined to Indian reservations and the wealth of their forefathers, the freedom of the lands their ancestors fought for, was taken away. Promises had been made, treaties were set out, but the powers that be did not want to share the wealth with its Indigenous populations. Instead of building alliances and a true partnership with the original inhabitants, laws were put into place including the outlawing of sun dancing and the practice of holding potlatches. Indian culture was suppressed and Indian residential schools were designed to eradicate Indian spiritual and cultural practices.

The legacy of residential schools has both its good and bad. Indian children learned to read and write in English, they became literate. In some schools, known as industrial schools, Indian children learned things such as farming and cultivation, sewing clothes, making shoes, raising livestock, etc. The negative aspects: loss of Indigenous language, culture and spiritual practices; loss of family and parenting skills; and rampant physical, sexual, verbal and emotional abuse. There are countless stories of what happened to the children, and stories of missing records of what happened. Some children never returned to their home communities. They simply vanished, like the many missing and murdered indigenous women in Canada. The legacy of the residential schools survives from generation to generation in dysfunctional families, communities and individuals.

This walking forward together is like the two-row wampum: two canoes going in the same direction, side by side, that is what our nation-to-nation relationship needs to be.The policy of the government and the residential schools was to put the Indian people into a second-class of citizenship. In fact, Indians were not allowed to hire lawyers to fight for their rights, they were not allowed to own or pre-empt land, they could not vote. Those are the laws and policies of the 20th century. They are directly responsible for the plight of the red man. They are also responsible for attitudes of non-Indigenous peoples who think that Indians have a free ride, they don’t pay taxes, everything is given to them based on the tax dollars that they work hard to pay, that Indians are alcoholics, drug addicts, basically bums that have no place in society except at the bottom of the “totem” pole. They are the low class, the second-class, those that don’t matter. Indians’ lives can be taken away: the hitchhiking Indian women that are never to be seen again or the sex workers who lost their lives due to inefficient police investigations and serial murderers.

As we are now in the era of reconciliation, there must be major change. The light on the horizon is because of the newly elected Prime Minister Justin Trudeau; it is because of the work of the Truth and Reconciliation Commission; it is because there is hope. As we move into the 21st century, with a new government and a new mandate, we have now entered into the Era of Reconciliation. Reconciliation is a matter of give and take; to come to consensus about what is right and proper. It is a two-way street. Let us hope and pray that we can all get it right this time, for let’s face it, after all, we are all here to stay.