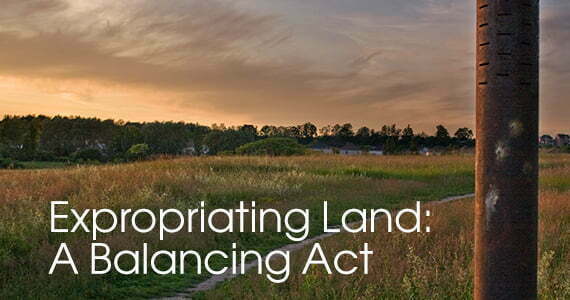 The somewhat foreboding term “expropriation” in Canada describes the right of the government (the Crown or one of its agencies) to legally take real property (land), that is in private hands and apply it for a greater public use or benefit. This concept is called “compulsory purchase” in the United Kingdom, and “taking” or “condemnation” under the power of “eminent domain” in the United States.

All land in Canada started off belonging to the Crown. The government did not need all the land and could not possibly have managed all of it. Large tracts were surveyed and then sold to private parties to live on, building structures on and otherwise turn into productive uses. Sometimes, after this transfer to private ownership, the government discovers that some of the land it earlier sold to private parties it now needs to get back for the public good. These important public uses that come up (and require access to privately owned land) include the construction or expansion of highways, water and other public utility systems, schools, transportation systems such as rail tracks, airports and light rail in cities, pipelines, parks or even to expand municipal boundaries. At all levels, governments require the power to expropriate private land. Expropriation laws mediate the inevitable conflicts between private real property rights and the public need for that same land, following clear step-by-step processes.

Statutory, But Not Constitutional, Protection

This government acquisition of land without the owner’s consent is not subject to the Canadian Charter of Rights and Freedoms simply because there is no constitutional right for Canadians to own property. This is not to say that there are no rights to due process or administrative fairness when the government asks to take land. It merely means that the landowner’s rights are found in the expropriation legislation and not in the Charter. The government must follow the law as to what land may be expropriated and must observe the procedures set out in the legislation that generally serve to protect the private landowner.

In Canada, there was once a common law basis for expropriation without legislative oversight. The procedure for government to take land and to determine the compensation payable evolved with economic and social conditions. But many would say that it did not evolve fast enough in favour of the landowner. The 1959 case of Grayson v. R. ([1956-60] Ex. C.R. 331) defined Canada as one of the most arbitrary jurisdictions of land expropriation in the developed world.

Given the obvious imbalance in power between landowner and government, the legislation provides numerous procedural safeguards that favour the owner in the expropriation process. These include the rights:

If landowners are not content with the expropriator’s initial proposals, they have the right to:

If an expropriating authority does not fulfil the procedural requirements set out in the expropriation legislation, it will be found to have acted without authority. The expropriation can be invalidated and the property owner will be able to bring an action for damages or an injunction against the authority.

If there is any uncertainty or confusion in the legislation about what the expropriating government can do, that ambiguity will be construed and settled in favour of the landowner (Toronto Area Transit Operating Authority v. Dell Holdings Ltd., 1997 CanLII 400 (SCC), [1997] 1 SCR 32). The burden of proof in the expropriation process is usually on the expropriating authority.

While the power of expropriation is generally held by the government, the power may be delegated to ministries, government agencies, railway or pipeline companies and public utility-type corporations. Expropriation legislation sets qualifying conditions for expropriations and the procedures that must be followed.

The government cannot take land as a punishment to the owner or on other political, unreasonable or capricious grounds. The land must be needed for a clear public purpose. Once that threshold has been met, much of the process turns to the determination of fair compensation for the landowner. The method to assess compensation varies across provinces but generally a “value to the owner” approach is applied in Prince Edward Island, Quebec and Saskatchewan. The “market value” approach is used in some form in the other provinces and territories. However, the two approaches will yield similar results, as the objective is to restore the owners to the same position as they were in before the expropriation.

Most expropriation legislation now includes a “home for home” provision to allow forfeited land to be swapped for equivalent replacement property. Other factors which may be considered in arriving at compensation include:

Under the Fifth Amendment of the American Constitution, no private property may be taken for public use without just compensation and without the due process of law. As it turns out, these operate in similar fashion to Canadian procedures. Canadian landowners enjoy an array of procedural safeguards to challenge an expropriation and ultimately receive fair compensation under ordinary expropriation legislation. There are no parallel constitutional protections because fair, modern and comprehensive legislation in Canada renders Charter protections unnecessary.

Today the expropriation of private land continues to have major political challenges. Governments want to limit expropriations, and approach them carefully and sensitively so as not to be perceived as being unfair or abusive in any way. That is why, in the vast majority of cases, there are quiet, collaborative and generous negotiations and offers on the part of the public authority behind the scenes in an expropriation. Accordingly, the strict formal steps in the process, including a public hearing, are rarely needed. By far, most expropriations have happy, or at least satisfactory, resolutions on both sides when they are negotiated in good faith in the shadow of the legislative framework.