A Website of The Centre for Public Legal Education Alberta
You are here: Home / Feature Articles / 38-3: When it Hurts to be Home / A Spotlight on Family Violence and Immigrant Women in Canada
Reading Time: 5 minutes 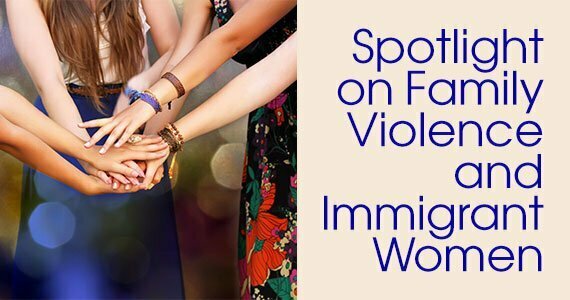 Family violence remains a serious, on-going problem for many inhabitants of Canada. Justice Canada defines it as any form of abuse, mistreatment, or neglect that a child or adult experiences—physically, sexually, emotionally, financially, or otherwise—from a family member or from someone with whom they have an intimate relationship.

Statistics Canada’s most recent profile on family violence indicates that there were at least 95,000 victims in 2011 according to police reporting, most of whom were women. (Family violence in Canada: A statistical profile). This is a drop from previous years, but it is widely recognized that the true number of victims in a given year is much greater than reported. The absence of more accurate numbers results from limitations in how family violence data is collected, from the types and phrasing of questions asked to the difficulty of securing a representative sample, particularly when many studies interview in English and/or French only. Low reporting rates are also at play, as many reasons exist for why individuals might be unwilling or unable to report their victimization.

Family violence and related involvement in the legal system is ultimately challenging for all parties involved, but these challenges are magnified for those immigrants unfamiliar with Canadian justice and social systems.

These and other issues limit collective understanding of family violence, especially around that occurring in some immigrant families in Canada. Tremendous diversity exists among these families, and yet relatively little data exists on how family violence plays out among those who have relocated to Canada. A recent resource by Justice Canada, Abuse is Wrong in any Language, recognizes that sometimes behaviours occur in immigrant families that are not always recognized as family violence or crimes. Nevertheless, the absence of detailed data in this respect slows the development of culturally meaningful initiatives to address the problem.

Inroads are being made, however. Studies and analyses of broader data are increasingly occurring with an eye to immigrant patterns, especially around the victimization and help-seeking behaviours of women. According to Statistics Canada’s 2011 profile, immigrant women may be at a slightly lower risk of abuse than Canadian-born women, particularly outside of spousal relationships. (Measuring violence against women: Statistical trends) Tremendous diversity exists among these families, and yet relatively little data exists on how family violence plays out among those who have relocated to Canada. Their access to support, however, is complicated not only by obstacles shared with Canadian-born women, but also those unique to or heightened by the settlement process. Shared experiences include feelings of fear, shame, and helplessness; hopes of the abuse ending; and a desire to secure the future of children. (Nowhere to turn? Responding to partner violence against immigrant and visible minority women) Additional obstacles include social isolation, language and cultural barriers, financial insecurity, fear or lack of understanding about their legal status, additional dependency on their partner, a lack of specialized services, as well as perceived and real discrimination and inaccessibility of services. (Hyman et al and Barrett et al)

Despite overall low-reporting rates around partner violence, recent immigrant women have been found to be among those most likely to come to the attention of law enforcement agencies, whether by self-reports (Hyman et al) or through reports made by others. (Barrett et al) Fear of the unknown, such as outcomes around custody and financial security, often renders legal intervention a frightening prospect for these women. But if it is deemed necessary, intervention presents a critical opportunity for addressing unhealthy family situations.

Outcomes when applying family and immigration law may differ tremendously according to each family’s situation, because each case is unique. Nevertheless, there are basic procedures in place across the country addressing living arrangements and financial support, particularly around children. Some legislation is federal, some is provincial or territorial. By and large, though, they all speak to the same issues. Following reported violence, immigrant families residing in Alberta might undergo proceedings related to, for example, the Alberta Child, Youth and Family Enhancement Act, the Canada Divorce Act or Alberta Family Law Act, with some key points set out below:

The mandate of Child and Family Services, as laid out by the Child, Youth and Family Enhancement Act, is to protect children from anyone that might injure their physical and emotional well-being. Exposure to family violence either as a target or a witness to the abuse of another family member is grounds for intervention. This can take the form of supervision, temporary guardianship, or in extreme cases, the permanent removal of children from the custody of their parents. With all three forms of intervention, parents have a right to either agree to the terms or to oppose them in court.

A supervision order (or family enhancement agreement) means that the children will remain in the home as long as the parents abide by the terms that they have agreed to follow as set out by Child and Family Services or those they have been ordered to follow by the court. Terms usually include the attendance of anger management and parenting courses by parents, as well as allowing a worker to visit their home on a regular basis to monitor the situation.

Temporary guardianship occurs when children are deemed to be at risk in the custody of their parents, and continues until the parents have completed agreed upon or court-ordered requirements. Typical requirements include the completion of parenting and domestic violence courses when family disharmony is noted. Once the conditions have been met and the concerns addressed, however, the children are returned to the parents.

Finally, in severe cases where Child and Family Services determines there to be no foreseeable opportunity to return the children to a healthy environment with their parents, an application for permanent guardianship is brought forward. Refusal or an inability to complete the agreed upon terms, for example, may be viewed as a lack of foreseeable opportunity.

Whereas the Divorce Act is exclusively for those who are married and have filed for divorce, the Family Law Act applies to adult interdependent partners as well as to all married but separated spouses who have not yet applied for divorce. These Acts apply to residents of Canada regardless of citizenship status.

All parents who are looking after their children 40% or more of the time have the right to request child support from the other parent. The Federal Child Support Guidelines stipulate how much base support is payable according to the gross income of the paying parent and the number of children in question. All parents have a responsibility to support their children, regardless of whether or not they are spending time with those children.

In some cases, spouses and adult interdependent partners are also eligible for spousal support, which is awarded on a discretionary basis by the court. The amount and duration are determined by a variety of factors, including but not limited to the duration of the relationship, the incomes of both households, on-going needs, past support patterns, any existing contractual agreements, and the duties performed by both parties while in the relationship.

Family violence and related involvement in the legal system is ultimately challenging for all parties involved, but these challenges are magnified for those immigrants unfamiliar with Canadian justice and social systems. All residents of Canada—irrespective of their immigration status—have the right to a family life free of violence. The law, in turn, strives to guarantee this right by engendering lifestyle changes and ensuring financial support as appropriate.

Still, guaranteeing that abused immigrant women are aware of this right, confident of its enforceability, and adequately supported through its procedures is a different matter. The path for accomplishing this, however, undoubtedly hinges in good part on paying closer attention to and acting upon community-specific needs around family violence.

Faye Wong is a lawyer at Legal Aid Alberta.