You are here: Home / Special Report / 38-3: Lost and Found / Finders Keepers? A Historical Survey of Lost and Abandoned Property and the Law
Reading Time: 5 minutes 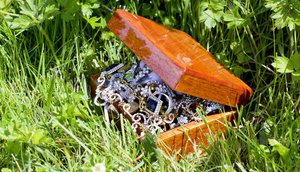 You are walking along a busy downtown street when a small object on the ground catches the corner of your eye. Intrigued, you bend down to find a small pouch which upon further examination contains a gold bracelet. There is neither attached identification nor any sign of the owner. To whom does this bracelet now belong? Does the well-known adage of “finders keepers,” the law of the elementary school playground, apply in this case? Or are there actual formal laws at play that delineate specific rights of possession?

Beyond simple moral considerations, the legal principles of “lost and found” that govern this fictional scenario are ones which jurists have debated for centuries. This article provides a historical overview of these issues and briefly explores some of the complexities associated with this field of personal property law.

The basic foundations of the law of lost and found are rooted in the legal codes of ancient Rome. In fact, the concept of finders keepers derived from the work of the second century jurist Gaius, who suggested that unowned property (res nullius) became “the property of the first taker.” (Lueck) The Roman Emperor Justinian further proposed that property which was intentionally abandoned by its owner (res derelicta) turned into a res nullius and could thereafter be claimed by any individual who found it (known as occupatio.) (Metzger)

The basic foundations of the law of lost and found are rooted in the legal codes of ancient Rome.

But not all things seemingly left abandoned fell under this category. Objects could “drop out of moving vehicles without their owner’s knowledge,” Justinian surmised, or thrown off a ship in a storm out of necessity. (Metzger) In these cases, the original owner retained his or her right of ownership and to take the property would be constituted as theft. (Melville) Roman law thus began to flesh out some formative distinctions about property ownership which would subsequently form the basis of the modern Western legal tradition.

The seminal case in the law of lost and found is Armory v. Delamirie (1722), 1 Strange 505, 9 ER 664, a tort case tried in the Court of King’s Bench, England, in 1722. The plaintiff, a chimney-sweep’s boy, found a jewel during the course of his work and sent it to a goldsmith (the defendant) for valuation. The defendant’s apprentice removed the jewel and offered three half-pence as compensation. Instead, the plaintiff sued to recover the original jewel.

Lord Chief Justice Pratt’s ruling in this case established the key precept in the law of lost and found. He ruled that “the finder of a jewel, though he does not by such finding acquire an absolute property right of ownership … has such a property as will enable him to keep it against all but the rightful owner.” In other words, the case established that a finder holds title to the property he or she finds against all other individuals, except from the true owner.

This ruling influenced subsequent interpretations in the law of lost and found. For example, in Bridges v. Hawkesworth (1851), 15 Jur. 1079, 21 LJQB 75, the plaintiff found some banknotes on the floor of a shop and handed them to Hawkesworth, the shopkeeper, asking him to return the money to the original owner. When, after three years the money remained unclaimed and Bridges sought to claim it as his own, Hawkesworth submitted to the courts that he had the better claim as the item was found on his property. Lord Patterson, however, dismissed this argument and upheld the principle established in Armory v. Delamirie.

A similar case occurred in Parker v. British Airways Board, [1982] QB 1004, whereby Parker discovered a bracelet on the floor of the British Airways executive lounge, submitted it to the B.A. authorities, and requested that he be contacted if the owner was not found. When British Airways instead sold the bracelet, Parker sued.

…if an object is found by an employee during the course of his or her employment, the common law has found that the employer has better right to the property

The courts reaffirmed that to establish possession, the owner’s aminus possidendi (intention to possess a chattel) must be clear. In the Parker case, though the British Airways lounge was restricted to a certain class of passengers, there was no manifest intent by the airline to exercise its control over lost property found in the lounge. Evidently, the common law has leaned heavily on the side of the finders over other potential competitors.

Exceptions to the Rule

However, the courts have established some limitations to the general rule set out by Armory v. Delamirie. Hibbert v. McKiernan [1948] 2 KB 142, 1 All ER 860 demonstrated that the law does not look kindly on trespassers or wrongdoers. In this case, Hibbert trespassed on a fenced golf course and found a number of golden balls. Though the balls were abandoned, Hibbert’s presence on the property was dishonest and taking the property constituted an act of larceny.

Furthermore, if an object is found by an employee during the course of his or her employment, the common law has found that the employer has better right to the property (as per South Staffordshire Water Co. v. Sharman, [1986] 2 QB 44; City of London Corporation v. Appleyard, [1963] 1 WLR 982, 2 All ER 834).

…the common law has leaned heavily on the side of the finders over other potential competitors.

Canadian law has largely adopted the same common law principles of finders’ titles established by English precedent. However, a knotty question still remains unanswered: how is one to determine whether an object found was intentionally abandoned by its original owner or accidentally lost?

In the Saskatchewan Court of Queen’s Bench, Justice Klebuc (Stewart v. Gustafson, 1998 CanLII 14001 (SK QB)) provided a set of useful criteria to consider when one encounters property that may be lost or abandoned:

As we can see, the scenario described at the beginning of this article is governed by a long history of law. We can use the lessons learned from legal history to determine how best to deal with this particular circumstance.

The bracelet is made of gold and is likely valuable, meaning it is unlikely that it was purposefully abandoned by its owner. Because it was found in a public area, the appropriate course of action would be to submit the object to the police or a nearby authority. One of the obligations of a finder, after all, is to take reasonable steps to return a lost object to its original owner (Parker v. British Airways Board). You may very well provide relief to a frantic owner looking for a beloved family heirloom. If not, then the common law stands on your side if the owner is not found and you may claim the bracelet as your own.

From this brief survey of the history of the law of lost and found, we can see that the concept of “finders keepers” does enjoy legitimacy in the law – albeit with some important qualifications.