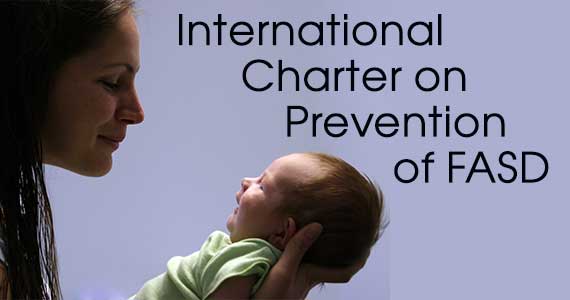 The First International Conference on Prevention of FASD (Fetal Alcohol Spectrum Disorder) was held in Edmonton, Canada from September 23 to 25, 2013. The following Charter was endorsed and adopted by the delegates at the meeting, who included about 700 people from 35 countries around the world; senior government officials, scholars and policy makers, parents and families, and Indigenous Peoples. It is presented to all concerned in the international community, as a call for urgent actions to prevent FASD.

Fetal alcohol spectrum disorder is a serious health and social problem, as well as an educational and legal issue that affects individuals, families and societies worldwide. It is a condition caused by alcohol use during pregnancy. It is a common misconception that FASD is the same as FAS (Fetal Alcohol Syndrome). FAS is only one of several disorders caused by alcohol use in pregnancy and it represents only a minority of the cases of FASD, which includes all conditions caused by alcohol use during pregnancy. There is no known amount of alcohol that is safe for the growing fetus, which may develop extensive brain damage as well as physical abnormalities. While early intervention and supportive care can improve outcomes for those who live with this disability, FASD can have devastating implications for the individual, the family, and other care givers.

The cause and consequences of FASD have been known for forty years, yet it continues to afflict millions of people around the globe. It is estimated that at least one in every one hundred babies born will have to live with this permanent disability. In countries where drinking among women of childbearing age is more common, the prevalence of FASD may be significantly higher. It is a condition of overwhelming concern in some populations.

FASD is preventable. However, one major obstacle to effective prevention is lack of awareness of the existence of the disorder, and the risks associated with drinking alcohol during pregnancy. Opinion-based advice about how much of alcohol is needed to potentially harm the fetus, as well as conflicting messages from different studies, cause confusion and contribute to the failure to see the risks for FASD. Currently nobody can tell if there is any amount of alcohol that is safe during pregnancy.

Findings from basic research have clearly documented that even low to moderate consumption of alcohol can cross the placenta and interfere with the normal development of the embryo and fetus. Heavy or frequent consumption of alcohol in pregnancy increases the risk of delivering a baby with FASD. It has been well established that people living with FASD frequently face additional challenges as a consequence of their disability, such as breakdown in family relations, disruption of schooling, unemployment, homelessness, alcohol and drug abuse, and coming into conflict with the law.

Adolescents and adults with FASD are at high risk to come in contact with the criminal justice system. Many may end up in jails, become repeat offenders, and are often victimized themselves. The legal implications of FASD are many and complicated. While early diagnosis, supportive living environments and tailored intervention can help reduce the risks of the secondary implications of the disorder, FASD is typically a life-long condition.

The financial burden of FASD on families, communities, and governments is substantial by any standard. Addressing the complex needs of individuals with FASD most often requires additional support in the health, social, educational and legal systems as well as of correctional services. The associated financial costs are unsustainable for many countries. However, the costs of inaction are even greater.

The cause of FASD is known and preventable.

Broad-based policy initiatives and actions at different levels of every society are urgently needed to encourage abstinence from alcohol during pregnancy.

Maternal alcohol consumption during pregnancy is the direct cause of FASD. The underlying causes for drinking during pregnancy are numerous, including lack of information about the risks of drinking while pregnant The frequent perception that FASD is simply due to the individual woman’s choices is a major barrier to effective prevention efforts in the field. Men also have a responsibility for FASD., drinking prior to pregnancy recognition, dependence on alcohol, untreated and unrecognized mental health problems, and social pressures to drink. The complex social and biological determinants of health also affect drinking and its consequences, including genetics, poverty, malnutrition, and lack of social support networks and personal autonomy. The risks for alcohol exposed pregnancies are also associated with adverse life events, gender-based violence, trauma, stress, and social isolation.

Whatever the influences are on women’s drinking and the risks to the fetus; effective prevention strategies need to be identified and adapted to the social, economic, and cultural context of each community.

Who is responsible for FASD?

The frequent perception that FASD is simply due to the individual woman’s choices is a major barrier to effective prevention efforts in the field. Men also have a responsibility for FASD.

Partners who show no or little support during pregnancy and who also may abuse alcohol, become violent, and demand that their pregnant partner drink with them, share responsibility for the outcome. FASD is preventable. However, one major obstacle to effective prevention is lack of awareness of the existence of the disorder, and the risks associated with drinking alcohol during pregnancy. Social norms that promote drinking among pregnant women are also responsible for increasing the risk of FASD. Healthcare and social services providers have a responsibility to inform about the risks of drinking during pregnancy, and to provide meaningful assistance and support to pregnant women to abstain from alcohol use, and also to secure adequate nutrition in their reproductive years. Failures in providing information and support make these providers responsible. Alcoholic beverage marketing that targets women of childbearing age, without cautioning about the use of their products during pregnancy, is also responsible. Society at large is responsible for failing to help pregnant women to cope with fear, anxiety, violence, malnutrition and poor health through means other than alcohol use. The risks associated with the underlying determinants of health are a societal challenge.

When a million babies are born every year with permanent brain injury from a known and preventable cause, the response ought to be immediate, determined, sustainable and effective.

This Charter calls on governments and all other stakeholders to engage in FASD prevention by:

Taking action to raise awareness about FASD and the risks of alcohol use during pregnancy.

Promote a consistent message about FASD prevention by the use of evidence
Public health information must be clear and consistent: abstaining from alcohol during pregnancy remains the safest path to preventing FASD. In many countries there is still a lack of access to evidence-based information about FASD and potential harms from alcohol use in pregnancy. Such information must be widely available, responsive to local contexts, and designed to facilitate access to supportive services for pregnant women.

Make FASD explicit in social and alcohol policies
Policies related to the social determinants of health should explicitly include the issue of FASD, its secondary implications for the individual, family and society, and how it can be prevented. Access to reliable and affordable  contraceptives is an important concern in this respect. FASD prevention should be given a more prominent role in the development of alcohol policies.

The responsibility for FASD prevention should not be borne by women alone. Prevention of FASD is a shared responsibility of all stakeholders. Actions should focus on information about risks of alcohol use during pregnancy and support to be able to abstain from alcohol consumption during this important period of life.  This support includes the provision of timely, compassionate, and competent prenatal care, as well as access to birth control and services to deal with alcohol dependence during pregnancy.

About awareness of FASD
Although FASD is well known among the public in some countries, it is generally very low in a global perspective. Adolescents and adults with FASD are at high risk to come in contact with the criminal justice system. Many may end up in jails, become repeat offenders, and are often victimized themselves. Assessing awareness at the population level is an important foundation for decision-making about targeted or general strategies and other approaches to FASD prevention.

About the frequency of FASD
In many countries around the world, the prevalence of FASD remains unknown. In other regions, this information is available only for some geographic areas and for specific populations. Coordinated research on the frequency of FASD within and between countries is needed to guide prevention efforts and set benchmarks for measuring the success of specific approaches.

About diagnosis and diagnostic capacity
It is a common misconception that FASD is the same as FAS (Fetal Alcohol Syndrome). FAS is only one of several disorders caused by alcohol use in pregnancy and it represents only a minority of the cases of FASD, which includes all conditions caused by alcohol use during pregnancy. FAS may be diagnosed at birth or in the first year of life as it often has visible signs of abnormalities. The remaining categories within the spectrum of FASD are usually not recognizable at birth and therefore cannot be diagnosed until the child reaches pre-school or school age, and demonstrates obvious signs of abnormal behavior and serious limitations in knowledge and understanding.

The skill to diagnose the full range of FASD is generally limited, and in most countries, non-existent. International collaboration in diagnosing FASD should therefore be encouraged as a major step in capacity building in diagnosing, and in linking this knowledge to primary prevention, as well as measures to reduce the secondary implications of FASD.

Supporting the research and evaluation needed

There is a wealth of research needed on FASD. For example, basic mechanisms at the genetic and epigenetic level, which either may facilitate or protect against the development of FASD are not fully understood. Basic research may lead to the development of tools to identify risk groups more accurately, as well as to new opportunities for targeted prevention.

At the level of applied research and evaluation, very few controlled prevention trials have been undertaken that can produce reliable findings on how to reduce the frequency of FASD. Programs for prevention must include resources for evaluation of effectiveness.

Additional basic and applied research has the capacity to increase knowledge about prevalence and prevention strategies that are truly effective and cost-effective. This calls for international collaboration in research on FASD.

There are a number of evidence-based practical measures available that can be introduced in many countries, regions or communities. For example:

1) Providing general information about FASD in appropriate school settings for both girls and boys, by making use of for example evidence based material on FASD.

2) Performing screening for problematic alcohol use among girls and women, which may signal alcohol use in later pregnancies. This can be introduced in primary care settings by the use of already available, validated and easy-to-use instruments. Evidence-based guidelines for providing treatment to pregnant women and mothers are available in the scientific literature and on many web sites.

3) Producing information on FASD, translated and adapted from existing sources, into country or region specific languages, cultures and systems. Such material should be made available widely and in the first place at schools, clinics and centers for maternal health and child health care.

National and international funding agencies and organizations should support such activities, which could be organized in cross country collaborations.

This article is reprinted with the permission of the authors through Professor Egon Jonsson, Executive Director and CEO, Institute of Health Economics. It was first printed in The Lancet Global Health. Volume 2, Issue 3, Pages 135 – 137, March 2014.