You are here: Home / Feature Articles / 39-5: The Law and Canada's Indigenous People / An Introduction to Inuit Rights and Arctic Sovereignty
Reading Time: 7 minutes 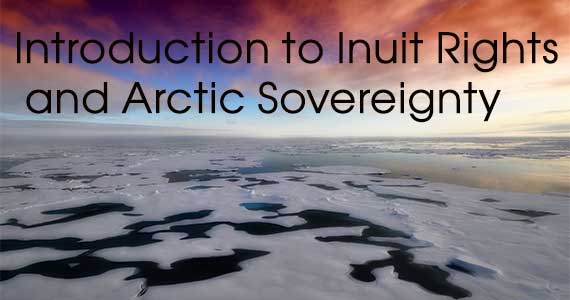 The rapidly changing climate in the Arctic is opening up the possibility of exploiting the natural resources contained in the Arctic Ocean seabed.  Arctic and non-Arctic States are angling to gain control over these resources that were previously locked below the sea ice.   What cannot be forgotten in the focus on State sovereignty over the Arctic are the rights of the Indigenous peoples who have lived in the Arctic, including the ice covered Arctic Ocean, long before the rest of the world turned its attention north.

Inuit Rights to the Arctic Ocean

Over the last five years, Senator  Charlie Watt  has been drawing attention to the rights of Inuit to Arctic Ocean areas of their homeland, called Inuit Nunaat, focusing on the parts of the territory that cover the Arctic Ocean.  What cannot be forgotten in the focus on State sovereignty over the Arctic are the rights of the Indigenous peoples who have lived in the Arctic, including the ice covered Arctic Ocean, long before the rest of the world turned its attention north. Inuit Nunaat includes lands in Canada, the United States (Alaska), Denmark (Greenland) and Russia. Importantly, it also covers large portions of the Arctic Ocean and some northern areas of the Atlantic Ocean, the exact areas where the world is now turning its attention.  Until recently, much of the Arctic Ocean within Inuit Nunaat was covered by ice for most, if not all, of the year. This has made it possible for Inuit to live on and use the frozen ocean waters as part of their territory. Ice-based territory is unique to Indigenous peoples of the Arctic. Unlike anywhere else in the world, these areas of the ocean have supported human populations and are a vital part of Arctic Indigenous peoples’ homelands.

It is also increasingly recognized in Canadian and international law that portions of an ocean or sea can be included as part of Indigenous peoples’ territories. The Declaration affirms that Indigenous peoples have the right to maintain and strengthen their spiritual relationship with their waters and coastal seas and other resources. In Canada, the same principles that apply to finding Aboriginal title to land could equally apply to establishing Aboriginal title to ocean or sea areas.

Other areas of Inuit Nunaat, including areas within Canada as well as areas beyond the reach of any State, are not covered by treaties. Inuit have title to these areas, unless they have otherwise agreed to share or transfer it to Canada or another State.  Some of these areas include large portions of the Arctic Ocean that are now being claimed by Canada and the Arctic Coastal States as part of their continental shelf claim.

The rights of Inuit have been largely ignored by Canada and the other Arctic coastal States as they attempt to establish their sovereignty over large portions of the Arctic Ocean seabed through the law of the sea and the process set up under the United Nations Convention on the Law of the Sea (UNCLOS).

Canada, Russia, Denmark, United States, and Norway, known as the five Arctic Coastal States, are the States are all claiming sovereignty over large areas of the Arctic Ocean seabed.  In 2008, they agreed to use the law of the sea to determine the extent of each of their boundaries within the Arctic Ocean, in what is known as the Ilulissat Declaration. This is to their advantage, as under UNCLOS, a coastal State has automatic sovereignty over the natural resources contained in the seabed from the shore to a distance of at least 200 nautical miles (nm) or, if the continental shelf extends beyond 200 nm, to the outer limit of the “extended continental shelf”.

To ensure that the rules are properly applied and that States do not claim more than they are entitled to, any State that has signed on to UNCLOS must submit its claim to the extended continental shelf to the Commission on the Limits of the Continental Shelf (the Commission). This technical body’s role is to verify if the coastal State’s claim is in conformity with the technical requirement of UNCLOS.

Canada was required to make its submission to the Commission in 2013, but delayed handing over information regarding its Arctic continental shelf. Its Partial Submission, made on December 6, 2013, provided to the Commission within the time limit imposed by UNCLOS, covers only the Atlantic Ocean continental shelf claim. (No claim will be made for an extended continental shelf in the Pacific Ocean).  At the time, then  Minister Baird indicated that a delay was required to allow for additional work to ensure that, when it is submitted, Canada’s claim to  the Arctic continental shelf would include the North Pole. This delay has also given Canada the opportunity to assess Denmark’s 2014 claim without revealing its hand, although this advantage was gained at the risk of annoying the international community – and in particular the Arctic coastal States – by not playing by the rules.

Inuit rights to the Arctic Ocean ice challenges the sovereign claims of five Arctic Coastal states as well as other States trying gain access to the resources in the Arctic Ocean.    International and domestic law supports Indigenous peoples’ rights to their territory and could be used to argue that Inuit rights to the Arctic Ocean ice are just as strong as their rights to their land-based territory. For both Canada and Inuit, the treaties ensure that Canada and Inuit both have a role to play in the governance of the Canadian Arctic. In addition, under the law of the sea and UNCLOS, a State’s right to the continental shelf is based upon recognized sovereignty over the coast. However, in Canada, the northern coast is covered by either Aboriginal title or treaties.

Arguably, Canada’s right to the extended continental shelf is completely tied to the rights it gained through the treaties with Inuit. Under this view, it is its treaty-partnership with Inuit that solidifies Canada’s sovereignty over these portions of the Arctic relative to the other Arctic States, by basing its sovereignty on Inuit’s historic use and occupation of these areas of their homeland. For both Canada and Inuit, the treaties ensure that Canada and Inuit both have a role to play in the governance of the Canadian Arctic. As a result, Canada should be engaging in in-depth consultations with its Inuit treaty partners over its claims to the Arctic Ocean seabed. Canada is required to engage with Inuit as partners in Arctic sovereignty issues, ensuring Inuit are fully informed and are given the opportunity to meaningfully participate in the decision-making that affects their rights.

Robin Campbell is a lawyer with Hutchins Legal Inc., specializing in Aboriginal and international law. Robin is part of the Hutchins Legal team, led by Peter W. Hutchins, which has been examining the rights of Inuit in the Arctic Ocean and Canada’s Arctic sovereignty. Over the past five years, Hutchins Legal has been commissioned by Senator Watt to produce a series of papers on these issues. This article builds on this work.