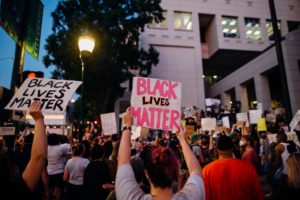 Photo by Kelly Lacy from Pexels

As I write, impassioned protests in Kenosha and elsewhere attest to the anguish experienced by many Americans at the racialized violence meted out to African Americans. The incomprehensible shooting in the back of Jacob Blake, father of three, by a white police officer is the latest in a string of recent shootings and assaults. Shocking levels of violence by whites against black Americans is in fact a recurring theme in U.S. history.

One of the first significant protest works to explore racism, oppression and violence against black Americans is Richard Wright’s 1940 novel, Native Son. Wright was a black American who fled the Jim Crow south (Mississippi) to inhabit what must have seemed a new form of prison on the South Side of Chicago in the 1930s. He interrogates the racist practices of his society from the standpoint of its victims. Never before had such a threatening, dangerous character as Bigger Thomas been selected as the central consciousness who will lead the reader through a lengthy novel. The three parts – Fear, Flight and Fate – reveal in economic terms the stark nature of the predicament and the powerful response of the main character.

Major critic Irving Howe summed up the novel’s significance by claiming it changed American culture forever. Howe stated that Wright’s work had made impossible a repetition of the old lies, and brought into the open the hatred, fear and violence that have crippled the culture. The Modern Library’s list of the best 100 novels ranked Native Son as No. 20. As a formidable, path-breaking protest novel, though, it is easier to value it as an important social event and provocative exploration of the vexing problems of race relations in America than it is perhaps to endorse its brilliance and greatness as a work of art.

Never before had such a threatening, dangerous character as Bigger Thomas been selected as the central consciousness who will lead the reader through a lengthy novel.In this Black Lives Matter era, this novel provides readers an unrelenting look at the violence that the forces of law unleash on the black characters who emerge from their one-room apartments and do life in conditions little better than those faced by actual prisoners. The opening chapter is a perfectly executed description of the stunted lives of Bigger, his mother and his two siblings, under the pressure of hunger and despair. It is twenty year-old-Bigger, badgered by his mother to find employment or lose welfare benefits, whose toughness and tenacity is needed to once again battle a huge black rat menacing the Thomas family. The author gives a vivid and authentic account of the desperate struggles in which his protagonist and others in the black community of Chicago’s South Side must engage.

Bigger is encouraged to take employment with a wealthy, privileged white family: the Daltons. His crossing the color line creates in him a palpable sense of dread at the prospect of saying or doing the wrong thing. While escorting home the daughter, Mary, after she had a night of heavy drinking, tragic circumstances result in her accidental death at his hands. A sequence of cascading actions leads Bigger to commit crimes and attempt various deceptions to escape capture.

The most remarkable scenes in the novel depict the harsh circumstances of the black community and the links with the dominant class – whites like Mr. Dalton. We learn Mr. Dalton is more than an impeccable liberal who donates to worthy charitable causes. He is also a slum landlord who enforces segregated hosing through restrictive covenants and who owns the apartment complex Bigger’s family lives in. Further, Dalton charges the vulnerable tenants seemingly unconscionable rent.

Dalton is one of several characters we meet in the third part of the novel – the trial of Bigger for two murders as well as the presumed rape of Mary. Bigger’s counsel, Max, effectively draws out the predatory nature of Dalton’s commitment to market fundamentalism in cross-examination. Dalton purports to be compelled by some iron law of capitalism to charge his stiff rents. The testimony of other witnesses contributes to the portrait of economic injustice and staggering levels of racial discrimination.

One of the first significant protest works to explore racism, oppression and violence against black Americans is Richard Wright’s 1940 novel, Native Son. Max is an elderly Jewish counsel with the Communist-backed Independent Labor Office who takes on Bigger’s apparently hopeless defence pro bono. He appears to me to have employed a rather risky strategy. Many of the submissions in closing argument at trial appear to underpin a radical political critique of the type of society that would create the accused. The submissions do not seem particularly well judged as an attempt to engage the judge’s sympathies (noting he is most unlikely to share the radical views of counsel). However, the efforts of Bigger’s lawyer do link to central themes emerging from the events that have led to the crimes in question. Max’s description of Bigger’s unfortunate life assists in the realization that this young man’s life was, in one sense, a crime waiting to happen. The accused is less someone whose fate is to be determined based on an individualized assessment than he is a symbol. Precisely what is he a symbol of? Perhaps of the depths with which American society can force a black youth – denied a proper education and any opportunity for hope – to descend to.

The novel also offers some engaging arguments for and against the use of the death penalty and incorporates references to other leading trials of the era. Wright makes good use of the shocking trials know as the Scottsboro trials (1931-37). In those cases, the state of Alabama was determined to prosecute nine young black men for the rape of two white girls aboard the top of a freight train, no matter how many miscarriages of justice the state had to keep committing to succeed. In the case of Bigger Thomas, Wright has attempted to depict a very different scenario. His protagonist becomes a figure who can stand as the logical counter to the immoral violence of 1930s law as it applied to black Americans.

I conclude that Native Son is indeed a must-read. I do remain ambivalent about a few of the artistic choices Wright made, the most controversial being telling the tale through the consciousness of such a thoroughly unpleasant and violent character as Bigger. (One should remember as well that this was his first novel.) Some readers will not buy into Bigger being the symbol who brings together the various strands of the author’s radical critique. However, no reader will fault Wright’s courageous attempt at an autopsy of an unhealthy and divided society.