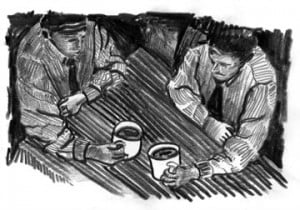 After 14 years of service with his employer, Norman was having coffee with Albert, a co-worker, and was surprised when Albert told him that the co-worker had been allowed to purchase back some of his years of service in England before commencing employment in Canada.

Norman had worked in his native Australia for twenty years before commencing employment in Canada. When he attended the sign-on interview on his first day with his Canadian employer, Norman entered believing he could not buy back his Australian service and left the meeting with the same understanding. However, this was not correct as his employer had recognized the Australian pension plan for a number of years prior to hiring Norman.

This article will discuss four cases that have considered the law of negligent misrepresentation in employment since the Cognos case.

In Norman’s case, the courts found that each of these elements of the test had been satisfied and he was awarded damages to put him into the same position he would have been in if he had received proper advice regarding the buy-back of his Australian service on his first day at work in Canada. This case is a decision of the Federal Court of Appeal, Spinks v. Canada, 1996.

The second case, Landry v. Pratt & Whitney Canada, 1996, was heard by the Court of Queen’s Bench of Alberta. Mr. Landry applied for a job at the defendant’s new plant in Lethbridge, Alberta. While still living and working near Montreal, he went to a first interview in Lethbridge.

After this interview, Mr. Landry returned to Quebec and quit his job; his wife resigned from her nursing position, and they moved to Lethbridge.

In applying the test as set out in Cognos, the defendant admitted that a special relationship existed and that damages had been suffered by the plaintiff, but denied that any promises of employment had been made to Mr. Landry.

The Alberta Court found that Pratt & Whitney Canada had not told Mr. Landry he had employment with them. Thus, the second part of the test had not been met, and the claim was dismissed.

While not specifically referring to the Cognos decision, the Ontario Court awarded each of the plaintiffs damages for the negligent misrepresentations of the defendant which enticed them to leave their existing positions for employment with the defendant.

In another Alberta case, the alleged negligent misrepresentation was to have occurred at the time the employment relationship was being terminated. The plaintiff, Blain Greenley, had worked for Xerox Canada Ltd. for 24 years. Due to corporate restructuring, his position was eliminated. Due to his lengthy service and senior position, a severance package was negotiated that allowed him to resign instead of being terminated.

The plaintiff sued claiming negligent misrepresentation and breach of contract.

The Alberta Court dismissed the action. It was admitted that the first four elements of the test from the Cognos case had been met, but the claim failed because there had been no detriment or loss to Mr. Greenley. He had already chosen to resign. If he had not resigned, he would have been terminated on the same terms. Therefore, no enticement had occurred.

The breach of contract claim also failed because the error constituted a mistake made by both parties known in law as a “common mistake” which entitled the employer to relief. The negotiations were not as to the amount of the pension account. The parties were merely attempting to determine the amount. The plaintiff could not take advantage of the error, Greenley v. Xerox Canada Ltd. 1997.

These four recent cases demonstrate that the Canadian courts are actively applying the five-part test as set out in the Cognos case in situations involving employers and employees.

While the existence of an employment relationship will usually be sufficient to establish the “special relationship” needed to satisfy the first element of the Cognos test, the courts are insisting that a plaintiff satisfy on the evidence each of the five elements or parts before allowing a claim based on negligent misrepresentation to succeed.