A Website of The Centre for Public Legal Education Alberta
You are here: Home / Sections / Employment / Occupational Health and Safety
Reading Time: 5 minutes

This article is the first in a series of columns on the topic of safety at work. Canadians spend most of their economically-productive years in the workforce. Most are spared a serious injury or worse. But there is always danger at work, particularly in the heavy industries that contribute to the Alberta economy.

The employment relationship is regulated by law in many ways. Well known are regulations relating to minimum wage, overtime pay, statutory holidays, child workers, and maternity leave – these are the category of minimum legislated employee rights called employment standards.

Since a job is a source of income to support oneself and one’s dependents, as well as an important source of esteem and personal well-being, government policy has expanded into social and economic assistance and income supports. This includes the Canada Pension Plan, Old Age Security, Employment Insurance, student loans, manpower training and temporary worker programs. This broad category of government policy and regulation might be called workforce and social development and security.

The law is also concerned with reducing and managing workplace hazards that might lead to injury and death. Worker compensation programs, as the name suggests, attempt to compensate and rehabilitate workers during their recovery from work-related injuries. The preventative piece of this regulation is called occupational health and safety (OHS).1

This first OHS column sets out some recent statistics about workplace injuries and deaths.

The Alberta ministry of Human Services, Employment and Immigration branch, maintains and publishes statistics on injury claims and lost worker time at work. As the table below shows, both disabling injuries and lost time have been declining in Alberta since a high in 2006, a year of major economic activity and expansion in the province.

‘Lost time’ means more than the day of the injury. ‘Disabling injury’ means the worker could not perform normal duties as a result of the injury. As of 2010, the last year of these statistics, the disabling injury rate is highest in manufacturing and lowest in offices. 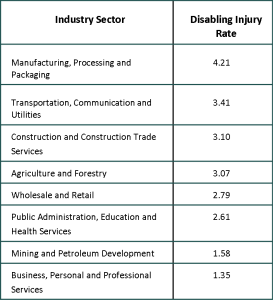 The rate here refers approximately to the percentage chance of being injured in that sector. The good news, at least for 2009 to 2010, is that all sectors reduced injury rates except mining and petroleum, and agriculture and forestry where the number of injuries increased.

Young workers under the age of 24 are generally thought to suffer a disproportionately higher incidence of lost time claims, disabling injuries and even work-related deaths but this is not borne out in this 2010 Alberta data.

Canadian work-injury data comes from worker compensation “claim accepted” statistics. The WCB is increasingly recognizing and accepting new occupational disease claims arising from terminal cancers such as silicosis and mesothelioma. These form a large part of the “fatality” category. Accordingly, in 2010, over 74% of the fatalities were of workers over the age of 45, although this demographic comprised only 38% of workers.

Men out-number women in the workforce 55%-45%. Yet men experience far greater rates of injury and death on the job than women. In 2010, WCB recorded 136 workplace fatalities in Alberta. Of those, 132 (or 97.1%) were men. This number must be considered in the context of occupational disease which is manifested well into retirement, although they are recorded as today’s fatalities.

We know that statistics must be placed into context and can be mind-numbing. Yet workplace injury and fatality facts are not well-known. So we offer just a few more numbers that relate to the modern risk of death at work.

In the 5 years ending in 2010, 689 Alberta workers died from on-the-job causes. This does not include workplaces under federal jurisdiction, such as airlines and the federal public service. Further, when adjusted for the growing number of workers in the province, the workplace fatality rate has markedly declined. 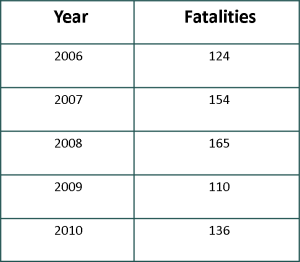 Interestingly, about one-third of those fatalities were caused by sudden workplace “incidents” such as crushing or falling. Some 18% of all Alberta workers killed on the job died as a result of being struck by an object.

A large number of these fatalities, over one-quarter, occurred in the context of operating motor vehicles, most of them highway incidents. The trucking industry reports the highest number of motor vehicle fatalities.

Transportation, manufacturing and mining and petroleum are the next three most deadly work sectors, but even then at only about one-third the rate as construction and its related trades. Agriculture and forestry recently have seen an average rate of work-related injuries but the lowest number of fatalities by far.

The cause of the remaining approximately 42% of work-related fatalities is identified as longer-term occupational disease, such as exposure to chemicals or air-borne particulates. Occupational disease presents its own unique medical, scientific and policy challenges. We will address this phenomenon in a separate column in the future.

Imagine a plane crash killing 136 people each year in Alberta. Or, more than 46,000 workers suffering disabling injuries so they cannot do their jobs. Naturally, we would say “something must be done about this!”

There will always be risk at the worksite. Some occupations carry more inherent physical danger than others. Firefighters, police, soldiers, furniture movers, and high-rise window-washers come to mind. Even relatively ‘safe’ office workers must occasionally deal with repetitive strain, exposure to unhealthy air and the emotional abuse of bullies.

This column will feature occupational health and safety issues in some upcoming issues. For example: the structure of the provincial legislation and its enforcement, how federally-regulated workers are protected, employers’ implied rights to provide a safe workplace, workers’ compensation, occupational disease, criminally unsafe workplaces, how a worker can complain about a safety issue, and current regulatory initiatives.

We will see how the law strives to protect employees from known and unacceptable hazards at work, while at the same time balancing the freedom of employers to save costs and generate profit from their investment and risk.