A Website of The Centre for Public Legal Education Alberta
You are here: Home / Feature Articles / 40-1: The Law and Technology / Organizations Need to Build their CASLs: Information for Non-Profits and Registered Charities
Reading Time: 8 minutes 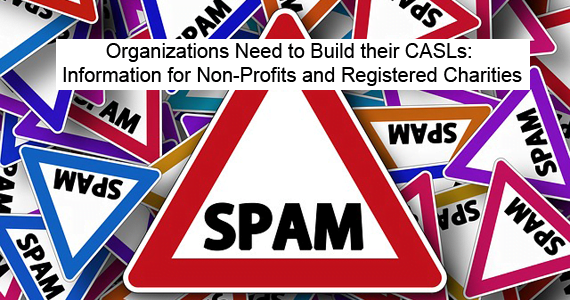 CASL stands for Canada’s Anti-Spam legislation. This anagram is the unofficial name for a new law  that came into force across Canada on July 1, 2014. Because it is a federal law, it will apply to not-for-profit organizations and, with some limited exceptions, to registered charities across Canada.

While the unofficial title of the Act targets spam, it is actually much broader in scope. CASL deals with commercial electronic messages (CEMs) and it regulates a broad range of activities including:

A Commercial Electronic Message or CEM is an electronic message that has as its purpose encouraging participation in a commercial activity and that is sent from or received by a computer in Canada. A “commercial activity” means a transaction or act that is of a While the unofficial title of the Act targets spam, it is actually much broader in scope. CASL deals with commercial electronic messages (CEMs) and it regulates a broad range of activities… commercial character, whether or not it is done with an expectation of profit.

There is a limited exception for registered charities. Any electronic message sent by a registered charity for the primary purpose of raising funds is exempt from the provisions of CASL. However, the definition of raising funds is unclear at this time. And, if a request for donations is placed within a newsletter, or some other form of communication with the public, it may be found that the primary purpose of the CEM was not to raise funds. This limited exception does not apply to not-for-profit organizations or Registered Amateur Athletic Associations.

Consent is really the key concept to be aware of in CASL. The Act creates a permission-based scheme under which consent is required before a CEM can be sent. Consent can be either express or implied.

Express consent means that a recipient has voluntarily agreed to receive a CEM and this consent is documented. Consent can be either oral or in writing, and “in writing” includes both paper and electronic forms of writing. The CRTC has set out guidelines that state the information that must be in a request for express consent:

Once express consent is obtained, it does not expire, unless the person giving consent withdraws it at any future time.

The CRTC has issued Compliance and Enforcement Bulletin 2012-549 that gives guidance about obtaining express consent and gives two Consent is really the key concept to be aware of in CASL. The Act creates a permission-based scheme under which consent is required before a CEM can be sent. Consent can be either express or implied.examples of forms that are acceptable. You will find these forms here. The Bulletin also states that since express consent must be positive or explicit, an opt-out mechanism is not acceptable, nor is a “toggle box” where permission to send CEMs is already checked off.

Under CASL, consent can be implied in three situations:

An existing business relationship between the sender of the CEM and the recipient will be found if, within the previous two years the recipient has:

Existing Non-Business Relationships are of particular importance to registered charities and not-for-profits. An organization has an existing non-business relationship with a recipient if the recipient has, within the previous two years:

There are a number of CEMs to which CASL does not apply. These include messages sent:

These types of CEMs are excluded from the provisions of CASL except that they must conform to the rules about providing sender identity information and an unsubscribe mechanism so that the recipient can opt not to receive future CEMs. These messages must solely:

There is some uncertainty at the moment about the meaning of “solely” at this time. Further clarification is expected from the CRTC.

Third Party Referral messages must disclose the full name of the individual or individuals who made the referral and state that the message is sent as a result of the referral. These messages must also comply with the sender identity information and unsubscribe mechanism requirements. Only one Third Party Referral message may be sent under these terms, so it should contain a request for future consent.

The Unsubscribe Mechanism is one of the most important components of the CASL scheme. Every CEM that an organization sends must provide a way for recipients to unsubscribe from receiving messages in the future. A Regulatory Policy from the CRTC states that the mechanism must be “readily performed” meaning that it must be accessed without difficulty or delay and should be simple, quick and easy for the consumer to use. It must also be free of charge to the user. The means to contact the sender must be operational for at least 60 days, and the unsubscribe request must be completed within ten business days.

An example of an unsubscribe mechanisms created by the CRTC can be found here (under “Sample Forms” near the end of the page).

The Unsubscribe Mechanism is one of the most important components of the CASL scheme. Every CEM that an organization sends must provide a way for recipients to unsubscribe from receiving messages in the future. It is be very important for all organizations affected by CASL to  set up a system to track and monitor unsubscribe requests, so that they know what electronic addresses cannot be sent future CEMs. This could be a system as simple as a spreadsheet or as sophisticated as a fully integrated database. Note too, that the tracking system should also be set up to watch for the expiration of the two-year period for implied consents. Failure to do so that results in CEMs being sent to parties who have unsubscribed or have not been active with the organization for two years could lead to Notices of Violation from the CRTC, with the possibility of significant fines for the organization, and the officers and directors. After July 1, 2017, there is also the possibility of lawsuits by private citizens who allege harm and claim damages.

Under CASL organizations must also be aware of what contracts they have entered into that may involve a third party sending CEMs on their behalf. Some examples of these contracts could include:

For an example of how the CRTC is handling complaints under CASL, please see the following case comment on the Porter Airlines case by Martin Kratz, QC.