You are here: Home / Feature Articles / 38-2 Birth and the Law / Who is a Parent? Not a Simple Question!
Reading Time: 5 minutes 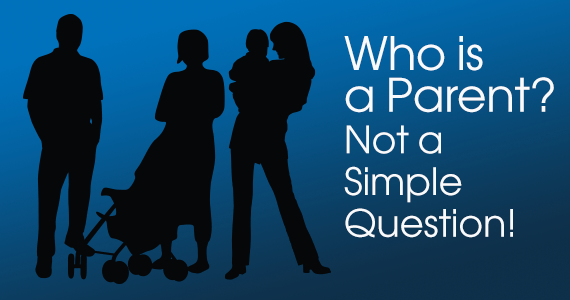 If anything could be said about the law, it is slow to change.  Our social structure continues to evolve at a faster pace than the law, which is creating difficulties in society and the courts.  We are seeing impacts on individuals and couples who are having children in non-traditional ways as the definition of what constitutes a parent from a legal perspective is loaded with confusion.  Developments in technology and social relationships, and at times, a combination of the two, have resulted in legal uncertainty.  This has led to a much-needed reanalysis of legal parenthood.

Should we be relying on traditional legal assumptions that parenthood only comes into effect at birth?  Does parenthood need to be confined to people who are married or in a relationship with the birth mother?  Can there be more than two parents in a family?

Legal parentage is assigned at birth by statute, and this legislation also determines who can be listed on the actual birth certificate. Each province and territory has a Vital Statistics Act which governs the registrations.  Once information has been recorded on a birth certificate, it is very difficult to change.  Although this might have been satisfactory decades ago, many non-biological parents are finding themselves concerned with the invisibility of their status when it is not recognized legally.

While traditional models of parentage remain relatively consistent, changes in family structures are starting to challenge what most consider to be simple:  the mother is the person that gave birth to the child, and the father is whoever was in a conjugal relationship with the mother at the time of the birth.  However, with the rise of Assisted Reproduction Technologies, the simplicity of defining who is the mother or the father has become increasingly complicated.

There are many legal options that allow participation as a parent in a family.  One of these mechanisms is that a person can stand in loco parentis to a child.  This means that a person can have parent-like obligations and responsibilities to the child, but it is not the same legal status that biological parents have.  The difference is that the in loco parentis relationship can be broken, which might threaten the best interests of the child  by potentially creating an unstable family circumstance.

When determining parentage, the courts typically look to what is in the best interests of the child.  Although this has remained at the heart of the debate, other issues come into play.  For instance, the intention of the parent plays a significant part in a court’s decision.  As parenting roles continue to evolve, and as the social norms around conception advance, whether someone can contract in or out of parentage in advance of the creation of a family has become a hot topic worthy of close examination.

Naturally, this raises some important questions:  Should we be relying on traditional legal assumptions that parenthood only comes into effect at birth?  Does parenthood need to be confined to people who are married or in a relationship with the birth mother?  Can there be more than two parents in a family?   There have been some recent cases whereby the courts have attempted to answer some of these demanding questions, and most of these address situations that involve Assisted Reproduction Technologies.

In Ontario, the Court of Appeal delivered a judgment that allowed for three parents. (A.A. v. B.B., 2007 ONCA 2 (CanLII))  This case involved a female same-sex couple who chose to have a child with a close male friend.  The three of them determined who would carry the child, and also agreed that the biological father could play a role in the child’s life.  Once the child was born, the female partner who didn’t carry the child applied to be deemed a legal parent, and in this case, a mother.  Both the biological mother and father consented to this application.  While the trial judge did not grant the application, Judge Rosenberg of the Court of Appeal did.  He based his decision in the best interests of the child, and he determined that there is a gap in the legislation that does not accommodate social and medical developments.  It is the one and only Canadian case that has allowed more than two parents.

In the recent case of D.W.H. v. D.J.R. the Alberta Court of Appeal addressed parentage within the context of assisted reproductive technologies, and granted parentage to a non-biological parent, along with the biological mother and the biological father.

In the recent case of D.W.H. v. D.J.R. the Alberta Court of Appeal addressed parentage within the context of assisted reproductive technologies, and granted parentage to a non-biological parent, along with the biological mother and the biological father. The general rule in Alberta regarding parentage is that parents are defined as the birth mother and the biological father, unless there has been an adoption or methods of assisted reproductive technology have been used. In this case, two men in a same-sex relationship used the sperm from one man to conceive a child with a female friend.  The majority of the judges on the appeal determined that the Ontario case of A.A. v. B.B. established that parentage can be granted where there is a legislative gap that “prevents recognition of the parent in question.”   In the Alberta case the Court of Appeal agreed with the chambers judge that the provincial Family Law Act contained a legislative gap that did not allow the intended non-biological father in the same-sex relationship to claim parentage.  The majority of the Court of Appeal upheld the Chambers judge’s decision that all three parties were parents, and in addition, declared both fathers to be guardians of the child. Both the chambers judge and the Court of Appeal judges reached their decisions within the context of what was in the best interests of the child.

The law is still struggling to determine legal parentage at birth, as the complexities of each case makes it difficult to create consistent guidelines.

The law is still struggling to determine legal parentage at birth, as the complexities of each case makes it difficult to create consistent guidelines.  Recently, the Uniform Child Status  Act, a paper that was created as a joint project between the Uniform Law Conference of Canada and the Federal/Provincial/Territorial Coordinating Committee of Senior Official on Family Justice was presented as a modern replacement that included basic rules in determining parentage for all children, whether conceived with or without Assisted Reproduction Technology.  These include posthumous conception, surrogacy and additional parents.

This paper’s recommendations suggest that in the case of presumption of parentage, conjugal relationships take precedent, unless proven otherwise on the balance of probabilities (Section 4).  In the case of children born of Assisted Reproductive Technology, the Uniform Child Status Act would focus on intention as the primary qualifier for parentage over conjugal relationships or genetic connections (Section 5). The overall goal is to provide stability to children, in spite of their origins.  At this time, the paper stands as a recommendation to the provinces to adopt its proposals.

Recent cases show that the legal definition of  a parent is changing.  A regulatory document could be useful to all of the provinces in order to promote consistency and predictability for families and children within our societal mosaic.  While the law still contains many shortcomings in how it addresses parentage within the ever-changing social intricacies, the cases discussed in this article indicate that courts are demonstrating a willingness to adapt.