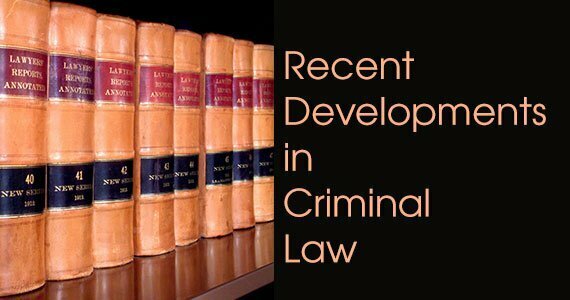 It will come as no surprise to anyone tuned into the current political situation in Canada that changes in our criminal laws over the last several years have been consistently in a single direction: that of creating more offences and imposing stiffer penalties.  Relying upon its position that Canadian streets and communities are generally unsafe and dangerous places, the present Conservative government has brought in measures it claims to be necessary to address and alleviate this situation.   Here are examples of some of the most notable.

Probably the most significant change when discussing recent changes in Canadian criminal law is the massive increase in mandatory minimum sentences.   The Conservative government has limited the discretion of sentencing judges in many more situations than has ever been the case previously.  And where offences already carried mandatory minimum penalties, the government has often increased the length and severity of those sentences.

Most sexual offences involving children now carry mandatory minimums. Probably the most significant change when discussing recent changes in Canadian criminal law is the massive increase in mandatory minimum sentences.  Previously, as with almost all other criminal offences, sentencing for these crimes was left to the discretion of the courts.  Judges usually imposed jail sentences when sexual offences were committed against persons under the age of 18 years.  However, the current government has changed the law so that almost all such offences are punishable by at least 90 days imprisonment (or to a minimum of one year imprisonment for more serious matters).  More serious sexual offences against children bring with them even more severe mandatory punishments.

This government has also imposed mandatory minimum penalties where none existed previously for the production of illegal drugs.   In 2012 the government enacted laws by which the growing of more than five marijuana plants is punishable by a minimum of 6 months imprisonment (larger numbers of plants brings longer mandatory minimums).  Persons involved in the production of more harmful substances (including opium based drugs such as heroin; cocaine in any form; and methamphetamines, to name only a few) are subject to mandatory minimum sentences of at least two years imprisonment.

Another change which amounts to a “mandatory minimum” form of penalty is in the area of victim surcharge penalties which are imposed upon offenders for at least the theoretical purpose of funding programs to assist victims of crime.  Until late 2013, sentencing judges had the power to waive imposition of this penalty if ordering payment would cause undue financial hardship to offenders or their dependants.  Now, the government has doubled the penalty amounts, and taken away the power to waive payment due to hardship.  All offenders are now required to pay these amounts, or to perform community service work instead.

Now, however, the government has removed this option for a number of offences where it might previously have been considered appropriate.  All offences of violence prosecuted by way of indictment (offences which might be considered to be of “moderate” seriousness or worse) are now excluded, as are many more drug offences than was previously the case.  Even thefts involving property valued at more than $5,000.00 are now excluded. Someone who steals property valued at, or money in an amount, more than $5,000.00 can no longer serve a jail sentence under “house arrest” but instead must be actually imprisoned if no other penalty is considered suitable.

The Conservative government has not tried to bring back capital punishment, but it has changed the law concerning the sentences for murder in two significant ways.

When Parliament abolished the death penalty in Canada in the mid-1970s, life imprisonment became the mandatory sentence for persons convicted of murder.  Persons convicted of first degree murder (the killing of police officers; murder which is planned and deliberate; or murder which is committed in the course of certain other offences such as sexual assault and hostage taking) would not be allowed to seek parole for 25 years.  However, in an effort to display compassion, and to encourage good behaviour while they served their sentences, convicted murderers subject to this penalty were offered the chance, The government also enacted legislation aimed at persons who commit more than one murder.  Such persons are no longer able to apply under the “faint hope” clause, and may also now be ordered to serve the periods of parole ineligibility consecutively. after serving 15 years of their term, to apply to a jury for a reduction in the period of parole ineligibility.  This so-called “faint hope” option had long outraged conservatives, and in 2011 they abolished this possibility for persons who commit murders in the future.

The government also enacted legislation aimed at persons who commit more than one murder.  Such persons are no longer able to apply under the “faint hope” clause, and may also now be ordered to serve the periods of parole ineligibility consecutively.  Under the former law, this was not possible: no matter how many persons were killed, the convicted accused could not be ordered to serve more than 25 years before being able to ask for parole.  Now, a judge may order that the different periods of parole ineligibility be served consecutively (“one-after-the-other”).  As of the date of preparing this article (August 2014), the only case in which this provision has been relied upon was the Edmonton armoured car murders committed in 2012.   The offender in that case was ordered to serve 40 years of his life sentence before he will be able to ask for parole.

In the last several years the government has also created a number of new offences in response to various events and incidents which it has claimed demonstrated a need for the creation of new crimes.  In many situations this claim is questionable because the Criminal Code already contained provisions making the conduct in question illegal. Critics have often alleged the government has acted more for political and image reasons, than to address any true need for the new offences.

For example, in 2009 the government created the offences of “assaulting a peace officer with a weapon”, “assaulting a peace officer causing bodily harm”, and “aggravated assault of a peace officer”.  In the last several years the government has also created a number of new offences in response to various events and incidents which it has claimed demonstrated a need for the creation of new crimes.  In many situations this claim is questionable because the Criminal Code already contained provisions making the conduct in question illegal. However, the Criminal Code has long included the offences of “assault with a weapon”, “assault causing bodily harm”, and “aggravated assault”, which could be laid whether the person assaulted was a peace officer or any other member of society.  The penalties for the new offences are the same as the “non-police officer” equivalents.  Other than appealing to the police lobby, then, it is difficult to discern what the government actually accomplished by creating these new crimes.

Another new offence which attracted similar discussion and criticism when it was enacted is the crime of “rioting while masked”, which carries with it a maximum punishment of 10 years imprisonment.  However, it has always been an indictable (that is, “more serious”) offence in Canada to take part in a riot.  Our laws have also long made it an offence punishable by up to 10 years imprisonment, to wear a mask or otherwise disguise oneself for the purposes of committing an indictable offence (including rioting).  So one might wonder what was truly achieved by the creation of the new offence.

One area which the courts had long been asking Parliament to address is that involving the defence of “self defence” and “defence of others” (and “defence of property”).   For many years, the Criminal Code contained a number of overlapping and complicated sections which described different tests to be applied where accused persons used force – and sometimes caused injury or death to others – in order to defend themselves or third parties.  Judges and lawyers found the provisions difficult to understand and apply, and trying to give legal direction to lay persons who were asked to serve on juries frequently became a nightmare.

In 2012 the government repealed the old provisions and replaced them with two sections: one to apply where the accused acts to defend him/herself or other persons, and the other to apply where an accused is defending property.    Now, the basic question comes down to whether the actions of the accused are reasonable in the circumstances of the case.  The Criminal Code sets out a number of factors to be taken into account, including the nature of the threat to the individual and whether weapons were involved; any difference in size, age, gender or physical abilities or disabilities between the parties; the background of any history or relationship between them; and whether the accused had any other options besides resorting to force.