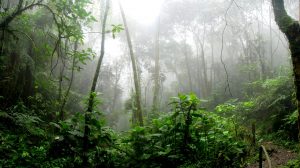 Donald Trump continues to audition for the job of World’s Greatest Practical Joker. You may have heard about the pending release of a new book by Edward Russo, entitled Donald J Trump: An Environmental Hero. Russo is a consultant who has advised Trump. He is also a staunch Trump loyalist. Recently, when the President announced yet more rollbacks of environmental regulations at the White House, he added that he looks forward to reading the book. Trump has in the past referred to climate change as “mythical” and “nonexistent”. His administration has already began the process to withdraw the U.S. from the Paris Agreement, which commits the U.S. and 186 other countries to keep global temperature increases below 2 degrees Celsius. The Climate Deregulation Tracker (run by the Sabin Center for Climate Change Law) documents 129 other steps that the Trump administration has taken to scale back laws and policies designed to fight climate change.

In Brazil – the other major nation of the Americas – the situation is even direr, if that is possible. We all watched the news this past summer with horror as large swathes of the mighty Amazon rainforest burned to a crisp. This rainforest is the most biodiverse place on the planet, being home to 3 million species – 10% of all plants and animals on Earth. The Amazon is also home to over one million Indigenous peoples, thousands whom have sacrificed their lives in recent years defending the forest against commercial interests. Given its ability to absorb millions of tonnes of carbon dioxide yearly, the rainforest is a vital element in regulating the Earth’s climate.

During the term of Lula de Silva and his Worker’s Party, the rate of deforestation in the Amazon declined and conservation measures appeared to be working. Since the election of the far-right leader Jair Bolsonaro in 2018, often dubbed the “tropical Trump”, protective measures have been gutted. Bolsonaro, also called “Captain Chainsaw”, has since provided complete support for agribusiness, mining and logging, including in the sensitive and protected areas of the Amazon. Because of this we have witnessed alarming rises in deforestation rates. He is also hostile towards Indigenous rights to land and pledges to scale back protections previously affirmed and strengthened. This clearly represents a dramatic setback for environmental justice.

Since the election of the far-right leader Jair Bolsonaro in 2018, often dubbed the “tropical Trump”, protective measures have been gutted.The destruction of the rainforest in 2020, significantly increasing the devastation over 2019 levels, ensures that the situation lurches towards a tipping point. Combined with the ongoing failure to defend Indigenous land subject to protective designations from illegal economic activity, there is a distinct prospect of the rainforest being unable to sustain itself. Large swathes of forest may turn into a dry savannah. An indication of the “climate nihilism” – the term that critics say best captures the approach of both Trump and Bolsonaro – might be found in the attitudes of one of Bolsonaro’s key cabinet ministers. Foreign Minister Ernesto Araujo has described climate change as a “plot by cultural Marxists” to suffocate the economy. Trump, likewise, reveals his disdain for environmental activists, who he considers “hoaxters” or “perennial prophets of doom”.

In light of such overwhelming neglect of duty to citizens in the U.S. and Brazil, and indeed around the world, we must avoid lapsing into despair. Let us, then, turn to a hopeful sign from arguably the most important court decision in environmental matters of the past decade. On December 20, 2019, the Dutch Supreme Court rendered its decision in the appeal by the Netherlands State against the Dutch Urgenda Foundation.

The Supreme Court examined again the evidence presented respecting the massive effects of climate change and the urgent need for the Dutch government to take immediate, decisive action to address and mitigate it. Evidence of the harmful effects of climate change was undeniable. Climate science and the international community largely agree that the warming of the Earth must be limited to no more than 2 degrees Celsius. In fact, according to more recent studies, that should be no more than 1.5 degrees Celsius. To meet this target, we must reduce greenhouse gas emissions. Otherwise, we can expect extremely dire consequences, such as extreme heat, drought and precipitation, a disruption of ecosystem resulting in a jeopardizing of the food supply, and a rise in the sea level resulting from melting of glaciers and the polar ice caps. These developments will threaten the lives, welfare and living environment of many individuals around the world, including the Netherlands.

The Netherlands and other states in the European Union have made clear commitments to reducing greenhouse gas emissions. The nation is a party to the United Nations Framework Convention on Climate Change. The Convention’s objective is to ensure that the concentration of greenhouse gases in the atmosphere remains within necessary limits. Staying within those limits means that human action will not be responsible for major disruptions to our climate.

Regular reports from the Intergovernmental Panel on Climate Change (IPCC) helped guide the Dutch Supreme Court on what commitments to reducing emissions are necessary to meet the climate emergency. In addition, the Paris Agreement of 2015 expressly indicates that states must strive to limit warming to 1.5 degrees Celsius.

Given the abundance of evidence, the Court determined the Netherlands had a clear duty to its citizens to safeguard their right to life and right to home life and private life (Articles 2 and 8 of the European Convention on Human Rights (the ECHR)). The Supreme Court builds on earlier decisions from within the E.U. Just as a state must take action where a serious environmental hazard is foreseeable, so the principle applies to the unprecedented threat occasioned by climate change in our time. The Urgenda Foundation met the necessary standard of a risk, being a genuine and imminent risk. Case law on Article 8 dictates that the state protect its citizens through reasonable and sufficiently stringent measures, which will avoid serious damage to the environment.

… the Court determined the Netherlands had a clear duty to its citizens to safeguard their right to life and right to home life and private life …Articles 2 and 8 of the ECHR protect not just individuals who can demonstrate a threat of immediate harm to themselves but also protects the Dutch population as a whole. Further, Urgenda could and did establish that a substantial danger existed even if the precise materialization of that danger might be uncertain (i.e. it could not be proved that a flood will occur in 2020). This line of reasoning is consistent with the precautionary principle. Finally, Articles 2 and 8 require a state to take either mitigation or adaptation measures (measures to lessen or soften the impact of the threat), or a combination of the two.

Article 13 gives a right to an effective remedy to those who prove a human rights violation. Accordingly, the Netherlands is required to establish practical and effective safeguards. In the Court’s view, this required a declaration to reduce emissions through state action by a minimum of 25% (in comparison with 1990 levels) by the end of 2020. An international consensus has developed in light of the clear findings published in IPCC Reports that various nations in the developed world (Annex I countries) are to achieve a 25% to 40% reduction in greenhouse gas emissions.

The extraordinary nature of this judgment, and its capacity to give hope and inspiration to many in these desperate times, is captured in statements issued by prominent human rights advocates. Mary Robinson, former UN High Commissioner for Human Rights and former President of Ireland, stated that the decision “affirms that governments are under a legal obligation, as well as a moral obligation, to significantly increase their ambition on climate change. Our human rights depend on it.” David Boyd, the UN Special Rapporteur on Human Rights and the Environment, referred to this as the most important climate change court decision in the world so far. It confirms that wealthy nations are legally obligated to achieve rapid and substantial emission reductions. Concerned citizens around the world will watch for the Dutch government’s new legislation.

Rather than waiting for litigation or ongoing demands by citizens for action, two governments deserve particular credit for taking action now.

Denmark’s new government has proclaimed that a new era is unfolding. Immediately after the left-wing Social Democrat leader Mette Frederiksen took power last June, she pledged to make the climate change struggle a top priority. She reached an agreement with others in her coalition to introduce binding decarbonisation and strengthen its 2030 target, which is now to reduce emissions by 70% below 1990 levels. In a news conference, the alliance warned that the world and Denmark are in a climate crisis. Limiting global temperature rises is, in Frederiksen’s and the alliance’s view, “not just the right thing to do, it’s also the most economically responsible one.”

… Ardern calls the climate emergency her generation’s “nuclear-free moment.”Denmark is also moving forward with energy efficiency improvements and a broad electrification strategy. Sales of all new diesel and petrol cars will be banned as of 2030. Cooperative efforts with neighboring countries are underway to develop offshore wind potential.

The election was fought in the shadow of a petition signed by 65,000 Danes. The petition demanded that the previous (conservative) government take more robust action on climate change. It also helped to ensure that debates on proposed environmental policies were central to the election. Polls showed that citizens voiced overwhelming support for much more aggressive measures in the fight for a sustainable future. For more information on this bold new legislative era, visit The Danish Environmental Protection Agency website.

On the far side of the globe, in New Zealand, Jacinda Ardern’s Labour government has moved decisively to address climate change as well. Floods and bushfires severely affected the country last summer. Recently, Ardern announced a firm commitment to applying a climate change lens to all major government decisions. In December, Minister James Shaw emphasized that cabinet routinely considers the effects of its decisions on human rights and the Treaty of Waitangi (the treaty with the Maori). Now climate change will become an essential part of decision-making. “Climate impact assessments” are mandatory for proposals designed to reduce emissions. Ardern calls the climate emergency her generation’s “nuclear-free moment.” In November, the government enacted a zero carbon bill, committing it to reductions of emissions to net zero by 2050. The Climate Change Response (Zero Carbon) Bill has passed into law. The legislation received support from both sides of the political divide. The bill also establishes an independent Climate Change Commission to advise government on how to achieve targets and to produce “carbon budgets” every 5 years.

Canada and other nations will want to examine the efforts made in Denmark and New Zealand as they move forward to address the vital issue of climate change.