A Website of The Centre for Public Legal Education Alberta
You are here: Home / Feature Articles / 41-5: Canada at 150 / The Significance of the Charter in Canadian Legal History
Reading Time: 7 minutes 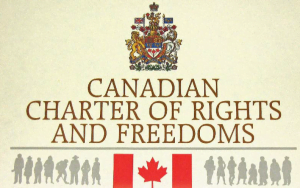 2017 not only marks 150 years since the British North America Act, 1867 (better known today as the Constitution Act, 1867), came into being, it also marks the 35th anniversary of an important part of our Constitution – the Canadian Charter of Rights and Freedoms.

What is the Charter?

At the grassroots level, the Charter also has also inspired Canadians to mobilize on emerging issues. The Canadian Charter of Rights and Freedoms is a bill of rights – a statement of rights and freedoms that was added to the Constitution in 1982. It is a powerful legal tool that protects those living in Canada from breaches of specific rights and freedoms by the federal and provincial governments. The Charter essentially protects Canadians from the power of the state.

Our Charter of Rights and Freedoms is 34 clauses long – relatively short, but mighty! It has changed the legal landscape in Canada since it was entrenched as Part 1 of our Constitution on April 17, 1982.

How did our Charter of Rights come to be?

Canada’s first Bill of Rights was enacted in 1960. The problem with the Bill was that it was not part of the Constitution, which meant it could easily be changed by the government. And it was not used effectively to protect Canadians’ rights.

Charter cases often require judges to weigh-in on contentious social issues, something for which the courts have often been criticized.

When Pierre Trudeau became Prime Minister in 1968 he was committed to a constitutional bill of rights. He believed that a strong democracy needed the protection of people’s rights from the power of the state in its supreme law – the Constitution. As this was just after 1967 – the 100th anniversary of the Constitution – there was talk by the provinces about revisiting and renewing the Constitution. One aspect under discussion was making it possible for Canadians to change the Constitution without asking Britain for permission to do so. This seemed an opportune time, from Trudeau’s perspective, to include a bill of rights in a renewed Constitution. Most of the provinces did not agree with Trudeau on including such a bill and years of wrangling between them followed. The contents of the Charter were hotly debated in several meetings and in the meantime, the Canadian public was given the opportunity to have input into its structure and contents.

The patriation battle between Prime Minister Trudeau and the provinces finally culminated with a deal in 1981. In the end, they successfully patriated our Constitution from Britain and added a Charter of Rights and Freedoms to it on April 17, 1982. The result of this contentious time in our history is a Charter that is used as a model by countries all over the world.

What rights does the Charter protect?

In Section 33, a Canadian invention called the ‘notwithstanding clause’ allows the federal and provincial governments to ‘override’ Charter-protected fundamental freedoms, legal rights or equality rights if they disagree with them. Including these Charter protections in the Constitution, means they are “entrenched” – all laws created by the federal or provincial government have to comply with the rights and freedoms included in the Charter. If they do not, a court can decide they are unconstitutional and ‘strike them down’. This is what the Supreme Court of Canada did in 2014 when it decided the law prohibiting physician-assisted dying violated section 7, the right to life, liberty and security of the person. It gave the government one year to craft a new law.

Who and what does the Charter apply to?

The last 10 sections of the Charter deal primarily with its application. Section 32 makes it clear that the Charter applies to Parliament, the government of Canada and to the legislatures and governments of each province. This means the Charter protects individuals from acts by their governments that are in violation of the rights and freedoms listed. It does not protect rights as between individuals in the private sphere.

The limits under the Charter

Charter rights are not meant to be absolute. In Section 33, a Canadian invention called the ‘notwithstanding clause’ allows the federal and provincial governments to ‘override’ Charter-protected fundamental freedoms, legal rights or equality rights if they disagree with them. For example, the Saskatchewan government recently announced it will use section 33 to override freedom of religion in a court decision on the right of non-Catholic students to attend Catholic schools.

Section 1, another section of the Charter which can be used to limit protected rights, allows the government to argue that certain laws need to exist, even if they do violate Charter rights. The criminal law prohibiting hate speech, which violates the freedom of expression, is an example of a law the government has argued needs to exist to protect Canadians, and the courts have agreed.

Giving meaning to the Charter: the role of the courts

Introducing the Charter into our Constitution inevitably led to greater power and responsibilities for the courts. The court’s role shifted from one focused on the division of powers between the federal and provincial governments, namely who was in control of what, to a newfound authority to determine whether laws were consistent with the Charter.

..the Charter protects individuals from acts by their governments that are in violation of the rights and freedoms listed. It does not protect rights as between individuals in the private sphere.

The case quickly made its way to the Supreme Court of Canada where the Court agreed that the search violated section 8 of the Charter and was therefore not constitutional. The decision was also significant because the Court gave an interpretation to the purpose and meaning of the Charter:

Charter analysis is not an easy task for the courts

Even with that purpose in mind, the process of Charter analysis is not straightforward. Deciding when laws violate Charter rights is often a tough task for the courts. It is not surprising then that even within the courts, different conclusions can be reached by the judges.

Including these Charter protections in the Constitution, means they are “entrenched” – all laws created by the federal or provincial government have to comply with the rights and freedoms included in the Charter. For example, another Alberta case that made its way to the Supreme Court of Canada involved the Hutterian Brethren of Wilson Colony who challenged a provincial regulation that required them to have photo identification on their driver’s licenses. The Hutterians said this law infringed on their religious belief. The Supreme Court of Canada justices were split about whether the provincial law’s requirement for photos justified the violation of their religious freedoms.

The majority of the Court concluded that the law was justified because the negative effect on religious freedom of the Hutterian Colony members did not outweigh the benefits of the security and integrity of the driver’s licensing system. On the other hand, two justices found the harm to the rights of the Hutterians was dramatic, and noted that the impact was not on just their belief system but on the life of the community.

Charter cases often require judges to weigh-in on contentious social issues, something for which the courts have often been criticized.

The impact of the Charter

The greatest impact of the Charter, by sheer numbers, has been in the area of criminal law. Charter-protected legal rights have meant greater safeguards for accused persons, including the right to speak to a lawyer, to not be detained arbitrarily, and to be free against unreasonable search and seizure. With respect to police powers, the courts have also weighed in on the scope of police to search an individual’s garbage, the use of sniffer dogs, and their ability to search an individual’s cell phone or laptop.

Most recently, the Supreme Court of Canada’s decision in R v Jordan reinforced how the courts can use the Charter to highlight systemic problems in the criminal justice system. Section 11(b) of the Charter guarantees that any person charged with an offence has the right to a trial within a reasonable time. In light of lengthy delays to get to trial, the majority of the Supreme Court set out new time limits– meaning, anything above these limits can be considered “delay” (18 months for provincial court trials; 30 months for superior court trials). Following the decision, Crown prosecutors, defence counsel, and departments of justice continue to struggle to address systemic trial delays and to find tangible solutions where, for example, serious charges must be stayed given the Court’s new time limits. Outside of the criminal law sphere, the courts have interpreted equality rights as well as the right to life, liberty, and security of the person in the Charter. The impact of this interpretation has meant recognition of LGBT rights, protection of women’s reproductive rights, and protection for the security of marginalized groups such as sex trade workers.

Our Charter of Rights and Freedoms is 34 clauses long – relatively short, but mighty! It has changed the legal landscape in Canada since it was entrenched as Part 1 of our Constitution on April 17, 1982.At the grassroots level, the Charter also has also inspired Canadians to mobilize on emerging issues. In February 2017, students at 22 law schools across Canada engaged in an unprecedented research-a-thon for the “Research 4 Refugees” campaign, looking at possible legal challenges to the United States’ executive order for extreme vetting of refugees. In their final report, the students relied on the Charter to support their conclusions. The Charter has become a powerful tool for protecting Canadians’ rights and freedoms in its 35 years. Given its track record, there is little doubt that it will continue to be used to ensure that our governments are responding in constitutionally appropriate ways to the changes and challenges of our times.

The Centre for Constitutional Studies hosts regular lectures about sections of the Charter of Rights and Freedoms for members of the public in Edmonton’s downtown core. These are given by law professors and instructors as part of its “Downtown Charter Series”. For more information, visit: http://bit.ly/CCSDCS

Patricia Paradis is the Executive Director, Centre for Constitutional Studies at the University of Alberta, Edmonton, Alberta.

Tasneem Karbani is the Education and Communications Coordinator with the Centre for Constitutional Studies at the University of Alberta, Edmonton, Alberta.