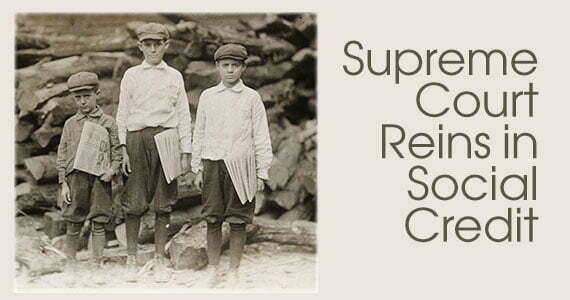 The Reference Re Alberta Statutes case of 1938 (Reference Re Alberta Statutes – The Bank Taxation Act; The Credit of Alberta Regulation Act; and the Accurate News and Information Act, [1938] SCR 100 ) has been written about elsewhere but this monumental decision of the Supreme Court continues to possess vitality and serves as an inspiration to me as a lawyer and citizen, particularly in considering our country’s commitment to fundamental rights.  … the opening act unfolded with trumpets resounding in the Alberta legislature, as the highly unorthodox new Social Credit government enacted a string of laws designed to raise the blood pressure of legal scholars and court political observers throughout the land. The case that went before the Supreme Court is also a fascinating drama performed by larger-than-life lawyers, politicians and justices who arguably for the first time were performing at a level that could attract admiration on the part of citizens and the legal community.

I also need to own up to a personal attachment to this court reference dating back to 1998, the 50th Anniversary of the decision. My friend Dale Gibson, the distinguished legal scholar, had called me up one winter evening and asked whether I might like to perform as one of the Supreme Court justices in a re-enactment of this famous case. I was quick to say “yes, of course,” and prepared to perform as Justice Arthur Cannon, appointed from the province of Quebec and an individual who was a key player in advancing our understanding of the underpinnings of the Canadian Constitution, with his creative and innovative decision-making in this matter. That might have been the one time in my life I was handed the opportunity to ask “penetrating” questions of great Edmonton lawyers in a dramatic role.

Returning to the actual case and the year 1936, the opening act unfolded with trumpets resounding in the Alberta legislature, as the highly unorthodox new Social Credit government enacted a string of laws designed to raise the blood pressure of legal scholars and court political observers throughout the land.

Premier William Aberhart’s party had swept to power on the wings of an arcane and rather dubious economic theory which had as a central plank a promise of a monthly payment of $25 to every adult in the province. My father has told me a number of times about the way his mother seized on the promise, at a time of extreme poverty and desperation for many in the province, and proclaimed in ringing tones that he had the family’s vote. The Great Depression had led to massive unemployment and hit the Prairie Provinces, dependent on agriculture and reasonable credit arrangements that could respond to a cyclical economy, as hard or harder than anywhere in the world. The matrix of Social Credit legislation, which, when put into law, proposed to radically alter the entire economy and manner of governing the province, had major obstacles to overcome if it were to operate as intended. These new laws were designed to heavily regulate and tax all banks and establish new credit mechanisms. They also sought to forge a new relationship between the government and citizenry by creating obligations that would go along with receipt of the monthly dividends. However, the laws had to operate within Canada’s federal system, where certain powers are set out in the Constitution as being exclusively federal in nature. Further, Albertans possessed citizenship rights that surely had to be taken into account.

I lack space to describe the various remarkable, not to say bizarre, aspects of the bills the government rammed through with no consideration for objections from the opposition. Let me just indicate that the dubious nature of the “social credit” laws would have been well known to the Premier, as his own Attorney General, John Hugill, is known now to have offered legal advice, recommending they not proceed as written. Premier Aberhart, known as “Bible Bill” to many due to his “Back to the Bible” radio broadcasts made as a fundamentalist preacher and righteous educator, was not the politician to be swayed by what he considered the minor inconvenience of contrary legal advice. Accordingly, the Premier pushed through an extensive legislative package despite the fact that legal experts across the country considered the overall social credit scheme to be beyond provincial competence because it invaded federal jurisdiction. Indeed, in a famous episode, the Lieutenant-Governor at one point asked Mr. Hugill whether the problematic bills could possibly be constitutionally valid. With refreshing candour the Attorney General, seated next to the Premier, admitted that they were not, ensuring that he would swiftly be asked for his resignation.

It was ultimately determined that the contentious Social Credit legislation would be dealt with by way of a reference by Ottawa to the Supreme Court of Canada in order to determine their validity. Two particular objects of scorn of the Social Credit government feature prominently in the legislation to be considered – banks and journalists not writing for the party newspaper.  Premier Aberhart, known as “Bible Bill” to many due to his “Back to the Bible” radio broadcasts made as a fundamentalist preacher and righteous educator, was not the politician to be swayed by what he considered the minor inconvenience of contrary legal advice Both the Bank Taxation Act and the Credit of Alberta Regulation Act would, without much ado, be found by the Supreme Court to be beyond the province’s powers, as dealing with banking and currency regulation, matters allotted to Parliament under our Constitution.

The attempt to rein in and severely restrict the powers of the press was laid out in the Accurate News and Information Act. Pieces of legislation with such grandiose titles are generally documents the informed citizen has learned to be wary of, as they usually portend content greatly at odds with the statutory brand name. Indeed, this legislation in reality was far less concerned with accuracy than with a desire to remove the ability of newspapers to operate as independent news gathering entities. For instance, the “Alberta Press Act” as it was generally referred to, enabled government to review all articles for possible offence and demand that equal space and prominence be allowed for a government communiqué in the offending paper, “correcting the record” as it were. As well, government could demand the complete disclosure of all journalistic sources and the naming of all contributors. Failure to comply could result in large fines or even closure of the newspaper. At any time, Big Brother could also prohibit the publication of information obtained from specified persons or censor the writings of targeted journalists.

The Reference Re Alberta Statutes was heard by the Supreme Court in Ottawa in January 1938. It has echoed down through history firstly because of the creative and innovative written and oral argument of the distinguished counsel involved. With regard to the Press Bill there were two ground-breaking judgments which stand to this very day as powerful statements of support for the importance of freedom of expression and freedom of the press as necessary aspects of our constitutional democracy.  The most remarkable factum, or written argument, was filed on behalf of the Attorney General of Canada, who argued against validity. The barrister in question was Aimé Geoffrion K.C. of Montreal, a true powerhouse of the Canadian bar. He was equally at home in French and English and possessed a cultivated wit. Geoffrion was a leading “Canadian nationalist” in the best sense.

Geoffrion’s argument included a “Brandeis brief” of 138 pages, designed to show just how radical and potentially disruptive to the Canadian legal and political order the legislation would in reality be. The brief contained in addition to straight legal argument diverse news releases of the Aberhart government, quotes from legislative debates, radio scripts and excerpts from books and articles on the “wacky” and potentially revolutionary aspects of Social Credit theory. He fended off the argument that this was all irrelevant by persuading the Court that this was all properly linked to a contextual understanding of the legislation.

With regard to the Press Bill there were two ground-breaking judgments which stand to this very day as powerful statements of support for the importance of freedom of expression and freedom of the press as necessary aspects of our constitutional democracy. Chief Justice Lyman Duff rendered the judgment remembered as the first affirmation of an “implied bill of rights” which may be gleaned from basic principles said to underpin the text of the British North America Act, now the Constitution Act, 1867. Building on what Geoffrion had argued before him, Duff closely examined the combined effect of the Preamble to our Constitution, declaring that it is to be one similar in principle to the Constitution of the United Kingdom, and the power allocated to Parliament to make laws for the “peace, order and good government” of the country. He discerned that these encompass the protection of the public’s access to an independent press in order that citizens may learn about, evaluate and periodically dismiss, if they wish, the government of the day. Duff conceived this right as one embracing the interests of the citizenry right across Canada and that of the federal government. As a consequence, a direct effort to dictate what the public will learn through newspapers and an impairment of its access to news sources must amount to an invasion of federal jurisdiction and so be beyond the power of a province. The Chief Justice, in eloquent language, enunciates that there is a fundamental right of public discussion, subject to limits such as the laws of defamation and sedition. In situating freedom of speech at the heart of our democracy, Duff quotes Lord Wright – freedom of discussion is “freedom governed by law.” He concludes that the Press Bill would interfere with freedom of speech and of the press so as to substantially interfere with the workings of parliamentary institutions, having regard to their fundamental characteristics.

Justice Arthur Cannon provided a concurring judgment on the invalidity of the Press Bill that is striking as well. The Chief Justice, in eloquent language, enunciates that there is a fundamental right of public discussion, subject to limits such as the laws of defamation and sedition.  His careful and lucid analysis reaches the conclusion that the Bill amounts to criminal law. It regulated the press not from the viewpoint of private wrongs or civil injuries but from the viewpoint of public wrongs or crimes. “The Alberta Legislature by this retrograde bill is attempting to revise the old theory of the crime of seditious libel.”

The Reference Re Alberta Statutes has exerted considerable influence, by recognizing that a fundamental freedom – political expression is integral to Canadian democracy and the Canadian Constitution, and has been referred to in other major decisions of the Supreme Court, including Switzman v. Elblingand A.G. of Quebec, [1957] SCR 285 and Reference Re Secession of Québec, [1998] 2SCR217. Indeed, one could draw some fascinating connections between the latter decision of the Lamer Court -in 1998 and the 1938 decision. In the Québec Secession Reference, the Reference Re Alberta Statutes is seen to have initiated a line of cases which have developed a democracy principle, informing the design of our constitutional structure and now perceived to be an underlying constitutional principle that is a vital means of interpreting the written portions of the Constitution. It can create substantive legal obligations, and the Alberta government’s efforts to interfere with political speech and the relationship between citizens and their government triggered the conclusion that basic rights, although not part of the text of the Constitution Act, had been violated.