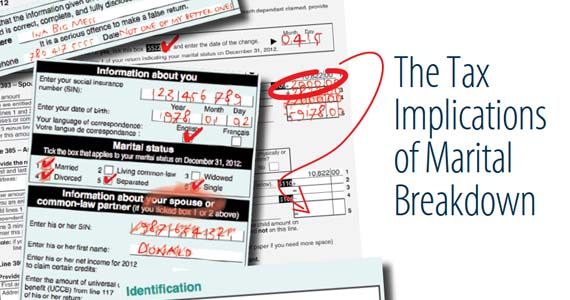 Breaking Up is Hard to Do

The breakdown of a relationship creates sufficient personal upheaval that it is unreasonable to throw in the myriad legal implications that also result. Unfortunately, the law is not always reasonable. And, the tax provisions applicable to matrimonial breakup add further complexity. With the likely animosity between the parties, there is a recipe for a potentially unpleasant and difficult situation.

Tax issues are a significant factor in most family law matters. The parties must be aware of the tax implications of property settlement, spousal, and child support, so that the resulting bargain is entered into with full knowledge of the consequences. This article can only scratch the surface of the broadest tax implications of matrimonial matters, and while it refers to spouses and legally married couples, the reader should note that the Income Tax Act treats common law partners identically to married couples.

The tax rules that apply to family law are complex and pervasive (some say perverse). Judge Bell of the Tax Court of Canada commented as follows:

The legislation in this area of tax law was, before the 1997 amendments, complex and bewildering to those unfortunately clutched by its talons. Now, it is almost incomprehensible. Planned legislative abstruseness could not have ascended the Olympian heights scaled by both the substantive and implementing provisions respecting the income inclusion and deduction of maintenance payments. … Thousands of taxpayers are affected by this maze of legislative pitfalls. Many of them, for economic reasons, are obliged to represent themselves in court. What hope do they have of making any sense of these provisions where lawyers and judges are driven to the wall in their attempts to understand and apply them? The agonies of domestic combatant strife are debilitating and depressing. No one in that position needs a torpefying journey through this legislative labyrinth.

Take the Money and Run: Division of Property

Transferring money to equalize matrimonial property is fairly easy. However, other assets can carry significant tax consequences. In most cases, property transferred between current or former spouses to settle property rights can transfer on a rollover basis. That is, no gains or losses arise, and the recipient of the property receives it at the transferor’s cost for income tax purposes. The parties can elect out of this treatment, resulting in a transfer at fair value. This assumes both spouses are Canadian residents – where a non-resident individual is involved, generally any gains or losses inherent in property transferred must be realized at the time of transfer.

Some assets are more problematic. There is no provision for the transfer of assets held as inventory, so such assets must transfer at their fair value for income tax purposes. Transfers of inventory held in a traditional business are uncommon, but assets held with the intention of resale at a profit are considered “inventory” held in an “adventure in the nature of trade”. Land acquired on speculation of a rising value allowing resale at a profit is a common example. Such land cannot be transferred on a tax-deferred basis. Of course, these speculative assets also have uncertain values, making a division to equal ownership a common settlement strategy.

In addition, only direct transfers between spouses/former spouses are covered by these provisions. It is not uncommon for spouses to consider themselves to “own” assets that are in fact owned by a corporation. Such assets can be complicated, or even impossible, to transfer without immediate tax cost, and the rules become more stringent where the transfers are not completed prior to the divorce. The valuation of pension plans is subject to many assumptions, including future earnings, rates of return and retirement age. Depending on the terms of the pension plan, it may be possible to split the pension at source, so each spouse receives pension benefits directly. However, this maintains a relationship between the parties and there is no money available until the pensioner decides to start collecting.

While not common, if the pension plan so allows, it is possible to transfer some or all of the value of a pension plan on a tax-deferred basis. Similarly, RRSPs, RRIFs and Tax-Free Savings Accounts can be transferred between spouses as part of a property settlement. Either party to a divorce may unilaterally apply for a split in their CPP credits. If this occurs, the credits built up by the two parties during each year of marriage are combined, and then split equally.

The Kids are Alright: Issues about Children

As in most aspects of life, children add further complications.

Single parents can typically claim an “eligible dependent” credit for a child, equal to the credit for spouse. The tax benefit depends on the child’s income, and can save well over $3,000 of taxes annually. To qualify, the claimant must be:

Only one person may claim any one dependent, and only one claim is possible per “self-contained domestic establishment”. As well, this tax credit is denied to a parent required to make support payments for a child. This final requirement had the potential to cause significant difficulty in the case of shared custody; however, the legislation currently provides that this restriction cannot result in both parents being denied a claim for the same child.

Each minor child also generates a smaller tax credit, which must be claimed by the individual who claims the child as an eligible dependent. It is prudent to address how such claims will be made so there are no later surprises or disputes.

Parents may also be eligible for the Universal Child Care Benefit (UCCB), the Canada Tax Child Benefit and/or provincial programs for children. Where one parent has custody, that parent receives these payments. In shared custody situations, a recent amendment provides each parent half the benefit they would be entitled to as the sole recipient. The UCCB is taxable. However, a single parent may designate it to be income of a child. If an eligible dependent is claimed, that child must report any UCCB so designated.

Child care costs can be claimed, within certain limitations, if these costs are incurred in order to earn business or employment income, or attend school. In the case of shared custody cases, each party can claim costs incurred that otherwise meet the requirements, irrespective of the amount claimed by the other spouse. Only the custodial parent would otherwise be able to advance such a claim.

Child support is not taxable to the recipient, or deductible to the payer, under current law. Support under agreements dating back to 1997 or prior can be an exception, but these are uncommon.

Spousal support will be deductible to the payer and taxable to the recipient, if it meets the legislative requirements. These include:

As well, special provisions can apply to bring third party payments (over which the recipient lacks discretion) and payments prior to a written agreement or court order into the tax regime. These criteria have been the subject of numerous disputes.

Finally, as noted above, child support is not taxable or deductible. The legislation requires payments be exclusively for the support of the recipient to avoid being classified as child support.

A recent Tax Court case highlights that, when these criteria are met, the parties cannot contract out of their income tax status. Numerous Tax Court cases address agreements or even court orders purporting to set the tax results of support payments and other matrimonial division issues, with the courts consistently ruling that parties cannot contract out of the income tax rules.

With the many complexities of marital breakups, significant legal costs are often incurred by parties to a divorce. Unfortunately, such costs are generally considered a personal expense, and consequently non-deductible. There is one exception, however.

The common law holds that an individual may deduct legal costs incurred to enforce or defend an existing right to support. Based on the state of the law in respect of support, the Canada Revenue Agency (CRA) accepts that custodial parents have a right to child support, and spouses have a right to spousal support. With this in mind, the costs of negotiating agreements or obtaining court orders quantifying such support are deductible. However, CRA considers the costs of increasing support, or converting taxable child support to non-taxable support, to be non-deductible.

While good news for support recipients, as support payers have no source of income related to their legal fees, such costs have never been accepted as a valid deduction before the Tax Courts. The Federal Court of Appeal has said that, while this may seem inequitable, and is based on common law, not on any legislation, this regime has been accepted by the CRA for many years. As such, in the words of the Court, it would be reasonable to expect legislation to have changed if this were not the intention of Parliament.

This provides only a brief summary of the many tax issues which can arise in a family law context. These tax matters are typically attached to the larger issues of property division, ongoing support and custody and care of the children, and can easily be forgotten, especially in situations when emotions run high.

Ideally, the expected tax results would be explicitly noted in the broader settlement agreements between the parties, so that there are no surprises at a later date. Although even the most comprehensive agreement cannot guarantee CRA will agree with the positions taken, ensuring everyone understands the intended result should reduce future conflicts.