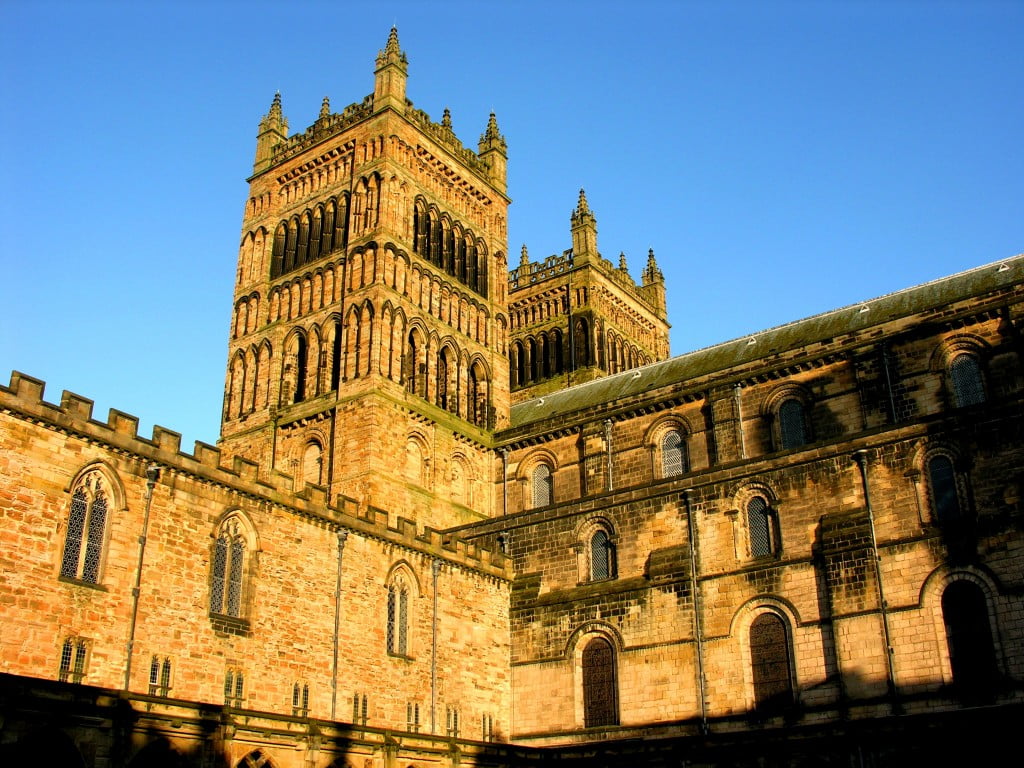 Durham Cathedral is in possession of three separate issues of Magna Carta – making it the repository of a wealth of knowledge that shaped Medieval England. Photo Credit: Durham Cathedral

The river of refugees from Syria reminds us that human history is full of examples of how states have abused their unlimited sovereign power against their citizens. They may have denied them basic rights to express themselves or to vote for their political leaders. People may have been tried and punished without a reasonable opportunity to defend themselves. Adherents to certain religions may have been persecuted only because of their particular honestly-held religious beliefs. Others of certain races in the society may have been denied access to education or to hold good jobs and own land. The worst used state power to capture, imprison, torture and kill their own. Almost all countries have denied basic human rights in some way to their people at times during their history.

In early 13th century England, the rich barons rebelled against the King. This was due to the King’s demand for overseas service that they felt was not owed, from his practices of intimidation to ensure personal loyalties, and from domestic policies, especially, increased taxes. The barons sought to restore the good old days of the Norman kings, but instead got pragmatic reforms.  Magna Carta, a form of Charter of The natural law thinking of the last few centuries emphasized that a number of essential liberties and rights were owed to all human beings at all times. This was reflected in the American Bill of Rights of 1791.Rights, attempted to reform specified abuses raised by the rebels.

Magna Carta specified liberties for all free men so that all might be insulated from royal whim. Certain taxes were not to be levied without the common consent of the kingdom, whose representatives’ decisions were binding on all (forerunner of “no taxation without representation”). Churches were set free. Legal reforms and procedural rights required proper trials and judgments to occur before sentences were carried out.

Many of Magna Carta’s 63 clauses dealt with feudal privileges of benefit only to the barons. Moreover, Magna Carta was soon violated by the King, bringing a resumption of civil war. The next King reissued the Carta, and by 1225, when it received its final form, it was accepted by all parties. It was the first statement of rights against absolute power of the state, in favour of the people – something we mostly take for granted today.

The English Bill of Rights

In the 1600s, human rights were synonymous with political rights. The Bill of Rights (1688) in England ensured that Parliament was finally and effectively sovereign over the monarch. The king had governed by an inherent Royal Prerogative which dated to the Middle Ages. Now the king could not interfere with Parliamentary legislation or impose taxes. Indeed, Parliament itself could limit the exercise of Royal Prerogative. Democratic representative government that we enjoy today in Canada was established by a Bill of Rights.

The United States’ Bill of Rights

The natural law thinking of the last few centuries emphasized that a number of essential liberties and rights were owed to all human beings at all times. This was reflected in the American Bill of Rights of 1791. The rights to speak and to follow one’s religion without fear of punishment from the state are examples. Moreover, these basic rights were immutable (unchangeable). While economic cycles, political priorities and governments would all change through history, the essence of humanity wherever situated on earth and the need for a guarantee of minimum human dignity would never change. Unreasonable searches and arbitrary detentions by the state would almost never be justified.

Human rights, also known as civil liberties, became a significant international concern after the scale of the Second World War’s state-sponsored atrocities was known. In its aftermath, the nations of the world came together to create an international body called the United Nations.

One of the earliest objectives of this new forum for the community of sovereign nations was to articulate a clear statement of basic human rights for the whole world to accept. If many countries accepted this statement, political pressure would fall on the others to do likewise. This layer of supra-national or international law would see nations, as individual parties, give up some of their sovereignty and submit to the United Nations’ agencies and its courts (International Court of Justice) to further these basic human rights principles.

The Universal Declaration of Human Rights was adopted and proclaimed by the General Assembly of the United Nations on December 10, 1948, “as a common standard of achievement for all peoples and all nations, to the end that every individual and every organ of society, keeping this Declaration constantly in mind, shall strive by teaching and education to promote respect for these rights and freedoms and by progressive measures, national and international, to secure their universal and effective recognition and observance.”

The shortcomings of the 1960 Canadian Bill of Rights paved the way for the 1982 Canadian Charter of Rights and Freedoms.This Declaration, drafted by Canadian John Humphrey, contains a Preamble and thirty articles. It sets forth the human rights and fundamental freedoms to which all men and women in the world are entitled. These include civil, political, economic, social and cultural rights. It was conceived as a common ideal of achievement for all peoples in all nations and still serves as the inspirational standard by which all human rights around the globe are measured. It has always been the most important and far-reaching of all United Nations declarations.

At this same time, provincial legislatures in Canada began to enact a number of human rights statutes designed specifically to prohibit discrimination. For example, Ontario’s Racial Discrimination Act of 1944 illegalized the publication or display of materials that racially discriminated. Other early human rights legislation protected fair employment and accommodation.

In 1947 Saskatchewan was the first province to enact a broader Bill of Rights Act [SS 1947, c. 35]. This legislation pioneered to its residents such fundamental freedoms as speech, press, assembly, religion and association. However, it was little more than a statement of good intentions as there was no effective enforcement mechanism in the legislation, such as a supremacy provision to apply in the event that the Saskatchewan legislature did pass freedom-violating measures. This Act was repealed and replaced by the Saskatchewan Human Rights Code [SS 1979, c S-24.1], which now provides that its freedom and equality rights apply unless non-compliant provincial legislation “expressly declares” that it overrides them [section 44].

This Declaration, drafted by Canadian John Humphrey, contains a Preamble and thirty articles. It sets forth the human rights and fundamental freedoms to which all men and women in the world are entitled. Saskatchewan’s John Diefenbaker championed human rights as a Member of Parliament in 1945. As leader of the Progressive Conservative Party in the national election of 1958, Diefenbaker campaigned for a Canadian Bill of Rights, which was enacted in 1960 [Chapter C 12.3 (1960, c. 44)].

The Canadian Bill of Rights

The shortcomings of the 1960 Canadian Bill of Rights paved the way for the 1982 Canadian Charter of Rights and Freedoms. The Canadian Bill of Rights only applies to federal laws and jurisdiction. It could be easily amended or repealed by Parliament through the British constitutional tradition called “parliamentary sovereignty”. There were no restrictions on Parliament other than democratic elections every four or five years which would pass collective judgment on the acceptability of political actions.   There was no real way to ensure that the laws would be fair, much less that we would enjoy basic human rights against abusive government action over the long term. Parliamentary sovereignty represented a major obstacle for constitutional rights.

The Universal Declaration of Human Rights was adopted and proclaimed by the General Assembly of the United Nations on December 10, 1948…The courts saw this problem when they interpreted and applied the Canadian Bill of Rights. When asked to enforce the Bill of Rights, courts usually concluded that the federal government could always later change its mind according to the doctrine of parliamentary sovereignty. In the end, the courts refused to give the Canadian Bill of Rights any teeth.

In western developed countries, there are certain unchanging fundamental values which give expression to the dignity and liberty of mankind. These values and rights should be captured and buried deep in the constitution of the nation. The early 1980s provided the momentum for such an initiative and process in Canada. The limited federal scope, the lack of enforcement and the very prospect that the Bill of Rights could be easily repealed all stirred the Trudeau government to protect these rights by clothing them with decisive, all-governmental constitutional effect and limiting the opportunity for amendment and repeal.

A set of absolute and universal, unchanging rights was prepared. A way was found to “entrench” or “enshrine” this set of immutable human rights. That put them out of the reach of self-serving, mortal, short-term politicians in any particular government mandate, regardless of the current social conditions. This meant that several special majorities, supported with broad national consensus, must agree to a change or repeal of these constitutional rights. It would be a profound political challenge to achieve that.

The Canadian Charter of Rights and Freedoms

This inter-governmental consultation process of entrenchment was undertaken and accomplished in April 1982. The Canadian Charter of Rights and Freedoms is not an ordinary piece of legislation that can be readily changed. It is entrenched and is a constitutional document that contains the basic, supreme human rights law for all of Canada. Its origins are found in Magna Carta.