A Website of The Centre for Public Legal Education Alberta
You are here: Home / Special Report / 39-4: Romance and the Law / The Engagement Ring: Whose Property is it? 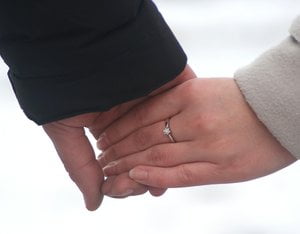 As William Shakespeare once wrote “The course of true love never did run smooth.” What happens when relationships turn sour and questions arise about property that a couple may have acquired together prior to marriage or given as gifts to one another? If diamonds are forever, does the bride-to-be get to keep the engagement ring when the wedding is called off?

On January 6, 2015, The Toronto Star featured a story about a now-separated twenty-something couple in Ottawa, who brought a bitter property dispute to the Ontario Superior Court. According to Justice Smith, the only “expectation” involved here was that the couple would marry, not that they would remain married indefinitely. In this case, the groom’s family gave the bride half ownership of a home worth $1 million as a wedding gift, which they then sought to reclaim when the marriage disintegrated a year and a half later, suggesting that the gift was conditional upon the parties staying married and continuing to “reside in the property as a matrimonial home.” The bride, in turn, argued that her share was an absolute gift that was not conditional upon any need to remain in the marriage in order to keep ownership.

Based on the facts of the case, the court held that the following components of a valid gift as set out in McNamee v. McNamee, 2011 ONCA 533 (CanLII) were met:

According to Justice Smith, the only “expectation” involved here was that the couple would marry, not that they would remain married indefinitely. Because there was no documentary evidence that supported the family’s claim that the bride had agreed to conditions that would strip her of her share of the property should the marriage end, the court dismissed the claim that the bride be required to reimburse the groom’s family for her share of the home.

While the circumstances of this case may seem quite specific and unique, variations of similar questions about ownership and conditional gifts are much more widely applicable than what appears on the surface. For example, if one party provides their partner with an engagement ring with the intention of getting married, which party gets to claim ownership of the ring should the couple never make it to the altar?

A short survey of different sources seems to indicate that opinions vary widely across Canadian jurisdictions. According to Toronto-based civil litigation attorney Anna Wong (“With this ring, I… take thee to court”), some courts have held the engagement ring to be a conditional gift, the eventual ownership of which is dependent upon which party ended the engagement. As this view considers the engagement ring to be a symbol of the binding agreement to marry, whoever ends the engagement forfeits their right to claim ownership of the ring. For example, in Okhai v. Sharify, 2004 CanLII 33356 (ON SC), the plaintiff sought the return of an engagement ring, claiming that the defendant Sharify conspired to relieve him of his assets through marriage. …if one party provides their partner with an engagement ring with the intention of getting married, which party gets to claim ownership of the ring should the couple never make it to the altar? Sharify countered by suggesting that she was physically or mentally abused by the plaintiff, which caused her to terminate the engagement. In his written judgment, Justice Loukidelis followed the previously mentioned rule on engagement rings, holding that because it is clear that “the engagement was terminated by the defendant [Sharify], … the ring should therefore be returned to the plaintiff.” However, because the claims of conspiracy and abuse were ultimately dismissed by the court for lack of evidence, it is not possible to anticipate whether these assertions, if proven, would have changed the court’s ruling.  …the offer and acceptance of an engagement ring has been taken by some courts to symbolize “a mutual promise to marry,” that calls for the parties to be restored to their pre-contract positions should the marriage not go forward. While this case raises questions as to whether it may be more appropriate to also consider the reasons behind why the engagement was terminated in the first place, interpreting engagement rings as a conditional gift in this way would certainly simplify the process, as it eliminates, in large part, the need to explore additional details about the couple’s relationship that move beyond who terminated the engagement.

Alternatively, an engagement ring can be considered an unconditional gift, which does not bind the party who receives the ring into returning it to the donee should the marriage not take place. In such cases, the ring becomes the property of the receiver upon delivery and cannot be recovered by the original owner despite who ends the engagement for whatever reason.

Lastly, according to Anna Wong, the offer and acceptance of an engagement ring has been taken by some courts to symbolize “a mutual promise to marry,” that calls for the parties to be restored to their pre-contract positions should the marriage not go forward. For example, in Sperling v Grouwstra (K.E.S. v. C.G., 2004 BCSC 330), both parties “blames the other for the failure to set a date, as each blames the other for ending the relationship, and each asserts a claim to the ring.” Despite the absence of persuasive evidence as to who ended the relationship, the court held that the ring should be returned to Sperling, as he was the original purchaser. In following this logic, returning the ring to Sperling was considered the most appropriate way in which to restore the parties to the financial positions they were in prior to the engagement.

As Ontario-based lawyer Jason Murphy points out, these questions of ownership have recently gained higher stakes, as “modern engagements often entail more financial commitments than just jewelry.” Therefore, as Wong suggests, there is a pressing need to “inject some consistency and clarity into the law,” to allow couples to better understand where they stand and to better equip individuals to make decisions best fitted to their circumstances.