A Website of The Centre for Public Legal Education Alberta
You are here: Home / Feature Articles / 39-6: The Top Court / The Nadon Reference: A Unique Challenge
Reading Time: 8 minutes 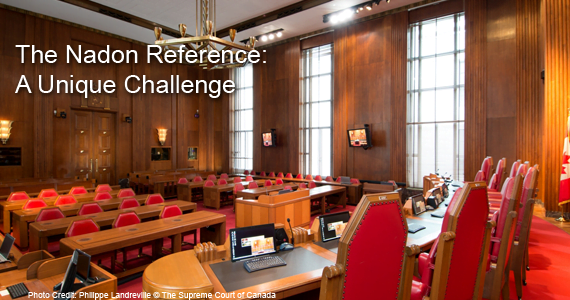 The judgment of the Supreme Court of Canada in the “Nadon Reference,” more elegantly known as Reference re Supreme Court Act, ss. 5 and 6, [2014] 1 SCR 433 is one of the more controversial decisions of the Court in the fairly long list of defeats for the federal government in recent years.

In 2013, the Honourable Marc Nadon was a supernumerary judge of the Federal Court of Appeal (a supernumerary judge of the Federal Courts has a reduced workload, having served 15 years and whose combined age and service total 80, or 10 years of service by age 70). He was nominated to the Supreme Court by Prime Minister Harper and sworn in October 7. His appointment had raised eyebrows. He was semi-retired. His specialities were transportation and maritime law, not frequent topics at the Supreme Court. The place he would occupy had been that of Justice Fish, a criminal law expert. He had been a member of the Quebec bar from 1974 until his appointment to the Federal Court in 1993. He was to fill one of three places on the Court reserved for Quebec by the Supreme Court Act. That same day, his appointment was challenged in the Federal Court as not meeting the criteria for such appointment by the Constitutional Rights Centre and constitutional lawyer Rocco Galati. This was overtaken by a reference by government, of which more later. Justice Nadon decided not to participate in any matters before the Court.

His appointment had raised eyebrows. He was semi-retired. His specialities were transportation and maritime law, not frequent topics at the Supreme Court. The place he would occupy had been that of Justice Fish, a criminal law expert. He was on “nobody’s short list,” said Robert Leckey, McGill Law School. But for Prime Minister Harper, he was the opposite of an “activist” judge: “the strong deference he showed to decisions taken by the Canadian government” “was likely one of the primary reasons” for his appointment, according to Bruce Ryder of Osgoode Hall Law School. His reputation wasn’t enhanced when his claim to have been “drafted by the Detroit Red Wings when I was 14” turned out to be dubious at best.

He had issued a strong – one might say scornful – dissent in a 2009 appeal of a court order requiring Canada to request repatriation of Omar Khadr from Guantanamo Bay (Canada (Prime Minister) v. Khadr, 2009 FCA 246) . Both the order appealed from and his colleagues met his wrath: “Ordering Canada to request the repatriation of Mr. Khadr constitutes, in my view, a direct interference into Canada’s conduct of its foreign affairs. … how Canada should conduct its foreign affairs … should be left to the judgment of those who have been entrusted by the democratic process to manage these matters on behalf of the Canadian people.” In contrast to the view of the majority, even if there were a Charter duty to protect Mr. Khadr, it had not been breached.

Any person may be appointed a judge who is or has been a judge of a superior court of a province or a barrister or advocate of at least ten years standing at the bar of a province.

For Justice Moldaver, however, the words “from among” “convey no temporal meaning.”  For him, the majority, in applying the ten-year rule, but rejecting “has been [an] advocate”, both in s. 5, are “cherry-picking.” (Arguably, the ten-year rule and the “has been [an] advocate” requirement in s. 5 can be distinguished: The former merely qualifies; the latter – assuming “from among” implies contemporaneity – contradicts.) He points out that, on the majority’s analysis, anyone who had 10 years at the Quebec bar in the past could rejoin for a day and thereby regain eligibility – a point not addressed by the majority: “I find it difficult to believe that the people of Quebec would somehow have more confidence in this candidate on Friday than they had on Thursday” (as scholars Michael Plaxton and Carissima Mathen point out, this can be taken two ways).

Responding to the argument that no purpose is served by excluding a nominee like Justice Nadon, with civil law training and ten years of past practice, they observed, “The question is not whether civilist members of the federal courts would make excellent judges of the Supreme Court of Canada, but whether they are eligible for appointment under s. 6.” Thus, it all comes down to the meaning of “from among.”

How can the Act be amended?

This case came to the court as a “reference,” that is directly from the federal cabinet without moving through trial and appellate courts. The Supreme Court Act permits the Governor in Council to refer certain “important questions of law or fact” to the court for an “opinion.” Answers to these questions are merely “advisory,” not binding, but in practice are followed. This reference contained two questions. Paraphrased, these asked:

(1) Can a person who was “at any time” a member of the Quebec bar of ten years’ standing be appointed to the Supreme Court? and

(2) Can the Act be amended to permit appointment of previous ten-year members of the bar?

Having answered the first question in the negative, the majority went on to consider constitutional concerns raised by the second. (Justice Moldaver found no need to answer the second question; with his answer to the first, the proposed amendments were redundant.)

Under the Constitution Act, 1982, amendments to “the composition of the Supreme Court of Canada” may be made only with unanimous agreement of Parliament and the provinces.

The majority noted that 1982 “confirmed its status as a constitutionally protected institution” – “confirmed,” not “established.” As the allocation of three places to Quebec is an element of the Court’s composition, the proposed change to s. 6, which provides for the Quebec places on the court, is subject to unanimity. (Justice Moldaver doubted that a change in qualifications of these judges was within “composition of the Supreme Court,” requiring unanimity.) Under the Constitution Act, 1982, amendments to “the composition of the Supreme Court of Canada” may be made only with unanimous agreement of Parliament and the provinces.  This assures Quebec, the majority said, “that changes to its representation on the Court would not be effected without its consent.” Thus, the proposed amendment to s. 6 may be made only under the amending procedure of the Constitution, though the proposed amendment to s. 5, the general provision on composition, is “validly enacted” only because it is redundant, amending nothing.

The opinion was controversial in part because the Department of Justice, in advance of the Reference, had asked retired Supreme Court Justice Ian Binnie to consider whether Justice Nadon was eligible. The opinion was released. Mr. Binnie had said he was, in which he was supported by the dean of constitutional scholars, Peter Hogg, and retired Supreme Court Justice Louise Charron. His reading of the history of the Supreme Court Act led him to conclude, “Parliament’s concern has never been with current membership but with a minimum length of experience at the bar.”

Reaction to the court’s opinion was widespread. The University of Ottawa convened a conference. There was a flurry of commentary in the press. Andrew Coyne of the National Post called it “flaky”. Unconcerned why s. 5 contains “has been” but s. 6 doesn’t, he argues that if Parliament had meant, “’from among the current advocates’ [his emphasis] … you’d think it would have said so, not hidden it in the text for six future judges to discover.” The appointment of Justice Nadon, though, was “dubious”: “If ever there were an argument for a more robust process of legislative review of such appointments, this is it.”

Scholars are arrayed on both sides. In an article in Constitutional Forum published before the reference was heard, legal scholars Michael Plaxton and Carissima Mathen critiqued the Binnie opinion. This advisory opinion remains, of course, that of Canada’s highest Court, to be ignored by government at its peril. Foreshadowing the court majority, Plaxton and Mathen take as given that “from among” connotes contemporaneity, charging Binnie with not asking “why the Quebec requirement was imposed in the first place.”

Both Mr. Binnie and Professors Plaxton and Mathen cite as precedent for appointment of Federal Court judges that three Federal Court of Appeal judges, and Madame Louise Arbour, a chief international criminal law prosecutor, were appointed, although their Court is not mentioned in s. 5. Peter Russell, political scientist and constitutional scholar at the University of Toronto, taking on the view that Federal Court experience is always an asset, points out that a Federal Court judge who may not have dealt with the Quebec Civil Code for many years would “have the potential to overturn decisions by [Quebec Court of Appeal] jurists whose everyday life in the law is in Quebec.” Plaxton and Mathen give the more extreme example of someone with ten years at the Bar who “then pursued an altogether different line of work” for, say, 25 years. On the Binnie interpretation, they say, such a person would qualify under s. 5.

What to make of all this? The Court is divided; eminent scholars and former jurists are on opposite sides. Neither view is bullet-proof; while the expansive interpretation can lead to unwanted results, the stricter view would, as Binnie and others would argue, exclude desirable candidates. The majority opinion declined to address the obvious flaw in its conclusion, the one-day-at-the-Quebec-bar opt-in avenue for eligibility. This advisory opinion remains, of course, that of Canada’s highest Court, to be ignored by government at its peril. The only certain conclusion is that no statutory text can, in itself, ensure sound appointments, which leaves us in need, as Andrew Coyne asserts, of a more robust process of review.