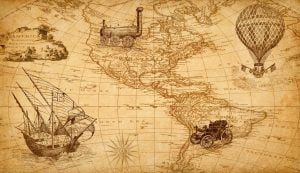 In his 1966 song “Taxman”, then-Beatle George Harrison sang the line “if you drive a car, I’ll tax the street”.  While that may exaggerate our tax system, taxation of travel takes many forms.  One form of travel taxation is via road tolls. Highway 407, Ontario’s only Express Toll Route, is not presently delivering revenues to the provincial government (it was transferred to other owners in 1999 by a 99 year lease). However, 40% of it is owned by the Canada Pension Plan Investment Board, so some tolls still reach government coffers.  Other provinces have occasionally imposed tolls to pay for certain road and highway construction costs, but this has been relatively rare.

That’s not to say that travel costs have escaped the attention of the Taxman.

Many people are surprised to learn that the commute between home and the workplace is personal, not business or employment, travel.

Both the provincial and federal governments impose fuel taxes.  A significant portion of the price of fuel represents various taxes.  In recent years, several provinces have implemented carbon taxes. The Federal government will impose a carbon tax on those provinces which have not implemented their own, commencing in 2019.  In addition, the GST/HST (5% in non-harmonized provinces) is also included in the price at the pump, which applies to both the sales price paid to the gas station and the other taxes already included.

In 2019, a combination of taxes will apply to fuel:

A price of $1.25 per liter at the pump would also include 5.95 cents of GST, bringing the total tax cost at that hypothetical retail price to 35.68 cents for gasoline (28.5% of the total) in Alberta, or 30.66 cents for diesel (24.5%).  These amounts vary by province, but a significant portion of the price at the pump makes its way to the government.

The provinces also manage the registration of vehicles, and the issuance of driver’s licenses, collecting fees for these services.  Whether there fees are “taxes” depends on one’s perspective, but the funds find their way to provincial revenues.  In some provinces, such as British Columbia, vehicle insurance is also managed provincially.

Gimme a Ticket for an Aeroplane

The CRA often challenges claims for business travel, reviewing the income-earning purpose and possible personal benefits.  The Air Travellers Security Charge applies to most commercial airfare.  The charge is collected by the air carrier, or its agent, as part of the ticket price.  It applies to flights from airports at which the Canadian Air Transport Security Authority is responsible for passenger screening.  The charge varies depending on whether the airfare is subject to GST/HST (being 5% higher when GST/HST does not apply) and on the destination, with lower fees applicable to travel within Canada.  For flights within Canada, subject to GST/HST, the charge is $7.12, so $14.24 for a typical round trip flight, plus GST/HST.

Uber and the Tax System

The advent of the “sharing economy” has created a variety of new challenges for the tax system.  The Canada Revenue Agency (CRA) regularly notes that income from the sharing economy is subject to both income tax and GST/HST, like any other income.  Failure to register for, and report, these taxes places the income within the underground economy.

The ride sharing service Uber has received considerable attention, including seizure of records by Revenue Quebec (which administers Quebec sales and income taxes).  The Uber website reminds Canadian drivers that they are self-employed, and must report their income. To assist, Uber provides an Annual Tax Summary to its drivers.

The Air Travellers Security Charge applies to most commercial airfare.The GST/HST system has struggled with ride-sharing services.  Most businesses are required to charge and collect GST/HST on their revenues, with an exception for “small suppliers”.  Generally, a small supplier has less than $30,000 of annual revenues subject to GST/HST and may chose not to register for GST/HST.  By not registering, they forego the right to recover GST/HST paid on their business costs.

However, according to the Excise Tax Act, taxi services providers “are not eligible for small supplier status – they must collect GST/HST, even if they earn modest revenues.  It was unclear whether ride sharing services met the legal definition of a taxi business, historically defined as “a business carried on in Canada of transporting passengers by taxi for fares that are regulated by the laws of Canada or a province”.

The Quebec courts, in addressing similar provisions in the Quebec Sales Tax legislation, concluded that Uber drivers were conducting a taxi business.  Quebec law required a taxi permit for any business which provides paid transportation of persons by automobile (Uber Canada Inc v Quebec Revenue Agency, 2016 QCCS 2158).  Uber eventually concluded an agreement with Revenue Quebec to charge and pay GST and QST on their drivers’ behalf.  However, this left their status in other provinces uncertain.

That uncertainty was removed by the 2017 Federal Budget, which amended the definition of a taxi business to include ride-sharing services.  More precisely, a business of transporting passengers for fares by motor vehicle, arranged or coordinated through an electronic platform or system, was added to the definition.  Specific exceptions were provided for sightseeing services and for school transportation services for elementary or secondary school services.  This brought Uber and similar ride sharing services into the definition of taxi services, requiring they register for GST/HST for even minor amounts of annual revenues, effective July 1, 2017.  It remains uncertain whether they would be considered taxi services for revenues earned prior to that date.

Many people travel for business reasons and the costs of such travel is generally deductible against the related income.  However, there are numerous special rules which can apply to travel costs.

The Federal government will impose a carbon tax on those provinces which have not implemented their own, commencing in 2019.  First, while the costs of travel for income-earning purposes is generally deductible, travel for personal enjoyment is not. The CRA often challenges claims for business travel, reviewing the income-earning purpose and possible personal benefits.  Retaining documentation showing the business done while travelling can be very helpful in supporting the deductibility of these costs.

Generally, the cost of food or beverages is subject to restricted deductibility, even where the costs are business-related.  This extends to the cost of meals while travelling.  The general rule is that only half of such costs are deductible, and only half of any related GST/HST is recoverable by registrants.  However, a variety of exceptions exist, including the following:

A number of restrictions also apply when computing costs related to automobiles having a cost in excess of $30,000.

Baby, You Can Drive My Car

Some employers make a company car available to certain employees.  As with any benefit received due to employment, the company car is a taxable benefit.  The rules for computing the benefit can be complex, but in general, the availability of an employer-owned vehicle for personal use results in a standby charge and an operating benefit.

Where the vehicle is used primarily (more than 50%) for employment purposes, and personal use is less than 1,667 kilometers per month (20,004 kilometers per year), it may be possible to reduce the benefit.

As personal kilometers influence the benefit, an accurate record of employment and personal driving is essential.  Many people are surprised to learn that the commute between home and the workplace is personal, not business or employment, travel.

As with most tax matters, numerous complexities can arise.  The above discussion addresses only the basic rules.  Professional advice should be obtained in respect of any specific claims.