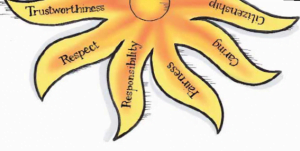 Often, people perceive ethics to be one of two things: an incomprehensible component of philosophy inherited from the Greeks of antiquity OR a strict set of rules set out by one profession or another. I suggest that ethics is part of the collective “we” at a much deeper and more profound level. 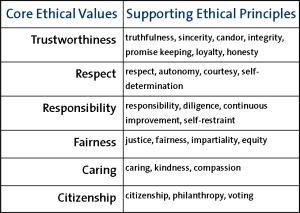 Several thoughtful writers, thinkers, and citizens have noted that in the rush to preserve our competitive place in the global economy, there has been a disconnection from the local — a process of de-traditionalization in which the neighbours and the ideas and beliefs that once bound together and defined local communities and associations become expendable. Thus, the move toward the global has heightened our longing for the community and the personal. Yet, it has also offered a kind of invisibility from which it may be easy, often self-advancing, to avoid our obligations and cut corners.

Civil society asks the deeply ethical question of how we want to treat one another — as individuals, as organizations, as governments, as economies and countries. The question of what civil means is central to discussions taking place at many levels throughout Canada. Many, if not most, of those discussions have operationalized the term so that civil society connotes service delivery; partnerships between and among nonprofits, governments, and businesses; and similar techniques. What is not discussed is the deeper question of how it is that collectively we want to be in our community or society. Looking around, it is evident that people are longing to be… they want to be-long and do so by affiliating with causes, groups, activities, and so on, that they have something in common with at a values level.

of service delivery models and accessibility, for

example, imagine how different the conversation

would be if it centered on ensuring that caring,

responsibility, and respect were the foundation

Ethics offers some guiding principles for how people can be and belong in their community, society, organization, or even family. Work by the Josephson Institute for Ethics suggests six core values that most people most of the time would agree are fundamental to the relationships that they have with the people around them.

Using these six core ethical values — and their associated ethical principles and vocabulary for ethical decision-making — in the furtherance of a civil society has the potential of radically shifting the discourse now taking place. Instead of talking about civil society in terms of service delivery models and accessibility, for example, imagine how different the conversation would be if it centered on ensuring that caring, responsibility, and respect were the foundation of community. Imagine conversations that moved from the pervasive discussion about management to the less certain, but more meaningful, conversation of trustworthiness and fairness. These contrasting cases exemplify a different way of introducing ethics to people and engaging Canadians in thoughtful discussions and actions oriented at building the relationships that would result in a more civil society.

These kinds of discussions would necessarily touch upon issues involving the role of law in society. If law mediates conflicts between the individual and the authority of society, as some contend, to what extent does it do so in the context of society today as compared to a civil society premised on the values and ethics discussed above? This would only be one question of many to be considered. Others might include the following:

Many from the legal profession become directors on boards of non-profit organizations. Usually the fit between the person and the organization is one of the organization needing a legal skill set and the other being able to provide it. The discussions addressing a civil society typically try to look inside such relationships, based on mutual usefulness. The forums for discussing a values-based, interconnected civil society are breaking down the silos of knowledge, limited organizational purposes, and status quo social structures in favour of new ways of thinking, interacting, and carrying out a social mandate.

Changes such as these suggest that the roles held by lawyers (and other professionals as well) will shift from expert to catalyst as new ways of fulfilling the social mandate of nonprofit organizations are sought. As someone who is not a lawyer, I wonder what the legal profession and leaders within that profession are doing to prepare lawyers to be full participants in the values-driven discussions unfolding in communities throughout the country.

The key steps in making a more ethical decision:

The poet Rilke writes “So we are grasped by what we cannot grasp; it has its inner lights, even from a distance — and changes us, even if we do not reach it, into something else, which, hardly sensing it, we already are.” I believe that ethics and the six core ethical values specifically are an inner light that can change us in ways that affirm how each of us wants to be treated and how we know others wish to be treated. In this simple and profound way, ethics becomes transformative, quite different from our preconceptions tied to the Greeks and professional codes. Our challenge is to take the risk to begin to employ the six core ethical values as the vocabulary of choice in our dealings with others. For those within the legal profession, this may also mean shifting the role from legal expert to a true counsellor … something many lawyers may already see themselves as being.