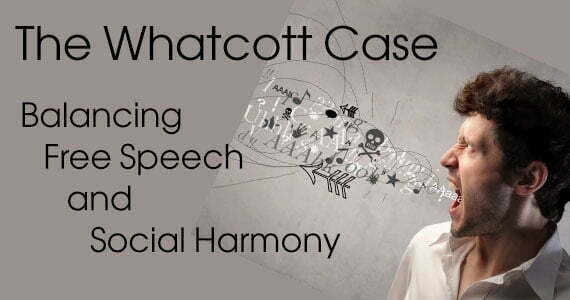 Introduction: a Clash of Rights

The freedoms of conscience, religion, thought, belief, opinion and expression comprise some of our “fundamental freedoms” listed in section 2 of the Charter of Rights and Freedoms.  They assure the free exchange of ideas, the practice of one’s faith, the development of new ways of thinking and valuable social, legal, political and democratic progress.  We exercise our free expression rights almost every day through our text messages, email, tweets and Facebook posts.

While free expression of our conscience, thoughts, beliefs and opinions usually is innocuous, it can also be critical and angry.  There is no constitutional right to be free from feeling offended.  Beliefs and opinions about others and the way we think they should live – their religion, their practices, their appearance, their culture, their sexual orientation – are sourced from stereotypes, personal perceptions or experiences.  Some originate in our own values, distinctions between right and wrong, religion or ideology.  Some people  hold to these beliefs and convictions more steadfastly than others do.

Another right protected by the Charter and provincial human rights legislation is the equality of individuals under law on the basis of race, religion, ethnicity, disability, gender, age, sexual orientation, etc.  Canadian law goes further – it prohibits the expression of hateful statements against an identifiable group on the basis of one of these defining attributes.

Canada has 14 different human rights statutes, one for each province and territory and the federal jurisdiction, each with its section related to discrimination and hateful statements:

Each statute is similar in principle to each other despite slightly different wording.  The Saskatchewan Human Rights Code is typical:

No person shall publish or display… representation that exposes or tends to expose to hatred, ridicules, belittles or otherwise affronts the dignity of any person or class of persons on the basis of a prohibited ground. (s. 14(1)b)

While the Charter protects the freedom and expression of conscience, religion, thoughts, beliefs and opinions, these things do not offend anyone unless and until they are expressed in some way.  Then we ask: what should be the legal limits, if any, of our free speech?

What is Wrong with Hate Speech?

The concern with hate speech stems from how it could dehumanize a group and cause some people to have extreme detestation for members of that group.  The presumption is that the targeted group appears inferior and its contribution to society decreases as members of the group feel rejected and are deprived of their basic human rights due to extreme societal detestation.  The Supreme Court of Canada says hate speech “lays the groundwork for later, broad attacks on vulnerable groups that can range from discrimination, to ostracism, segregation, deportation, violence and, in the most extreme cases, to genocide.” (Saskatchewan (Human Rights Commission) v. Whatcott, [2013] 1 SCR 467, 2013 SCC 11 (CanLII))

While this is the premise given to justify prohibition – even criminalization – of hate speech, legal restriction on hate speech remains controversial in Canada.  Free speech proponents ask how suppression of strongly held views and religious convictions leads to greater social harmony.  Can the expression of opinion on important social and political matters of the day ever be separated from what some people claim as harm to them?  There is no constitutional right to be free from feeling offended.  Is verifiable truth also to be legally suppressed because it may hurt feelings?  Who is more ‘vulnerable’ – the expresser or the person who feels offended?  Where do we draw the line on what word or tone is legal and that which is illegal?

This brings us to the recent Supreme Court of Canada case of William Whatcott who expressed strong religious convictions against homosexuals. The Supreme Court of Canada says hate speech “lays the groundwork for later, broad attacks on vulnerable groups that can range from discrimination, to ostracism, segregation, deportation, violence and, in the most extreme cases, to genocide.” He was arrested 27 times, but  was successfully prosecuted on only two.  He was involved in over 21 judicial decisions, including the one decided by the Supreme Court of Canada that is the subject of this article. It deals with the balance between religion and free expression on one hand and the inflammatory hate speech on the other.  It was a landmark case as evidenced by setting a record of attracting the most interveners in the Supreme Court’s history: 26, when the average is 4.1. [1]

Whatcott, a socially conservative Christian, campaigned against homosexuality, Islam and abortion.  He picketed and distributed flyers and posters to the public opposing these things, using what he admitted were “deliberately provocative” words. During 2001 and 2002 in Saskatoon and Regina, Whatcott’s flyers entitled “Keep Homosexuality out of Saskatoon’s Public Schools!” and “Sodomites in our Public Schools”, drew complaints to the Saskatchewan Human Rights Commission.  The claim was that the flyers promoted hatred against homosexuals.

The case eventually made its way to the Supreme Court of Canada.  The main determination was whether Saskatchewan’s section 14(1)(b), violated the Charter’s right to free expression, but was nevertheless a “reasonable limit” and therefore legally acceptable.

The Supreme Court of Canada Analysis

Free Expression is Violated by These Hate Restrictions

The Court found that the Saskatchewan prohibition against hate speech in section 14(1)(b) infringed freedom of expression guaranteed under the Charter.

The Court also found that the provincial rules against hate speech were limitations prescribed by law within the meaning of s. 1 of the Charter of Rights and are demonstrably justified in a free and democratic society.  The Court, however, concluded the part of the Saskatchewan legislation prohibiting speech that “ ‘ridicules, belittles or otherwise affronts the dignity of’ did not rise to the level of ardent and extreme feelings constituting hatred required to uphold the constitutionality of a prohibition of freedom of expression in human rights legislation.” Those words in section 14(1)(b) of the Saskatchewan Code were not rationally connected to reducing discrimination and they unjustifiably infringed free expression.  The Court struck them from the Code.

The Court went on to add that an expresser cannot hide behind morality, the sincerity of the belief, public policy debate, political discourse or even truth to justify what is otherwise hate speech.

Limiting free speech on matters of conscience and public policy should not be lightly done in a healthy democracy.  It was a landmark case as evidenced by setting a record of attracting the most interveners in the Supreme Court’s history: 26, when the average is 4.1.[1] The different conclusions reached by the different judges in Whatcott demonstrate that this is not an easy decision.  One lower court judge declared, “anything that limits debate on the morality of behaviour is an intrusion on the right of freedom of expression.” It appears that the federal Parliament agreed, as it had voted to repeal section 13 Canadian Human Rights Act, the equivalent of this Saskatchewan provision, before the Court delivered its Whatcott decision. [2]

Canada is a multicultural, multi-faith society.  Shutting down peaceful expression of certain beliefs perilously interferes with public policy dialogue and is a prelude to state-sponsored speech and censorship.  Governments and judges must be reluctant to quiet selected voices in the public square that they speculate might be considered “hate”, itself a loaded concept.  Whatcott himself claimed his advocacy was not against any individual group; he opposed some activities that some people engaged in and which was subject to legal debate and reform.

The basis for censorship remains shaky: is there less discrimination under a ban on public expression of opinions?  Group rights are tricky to elaborate and judges should be slow to expand and pronounce on them at the expense of individual rights to religious beliefs and expression.  The mantra of tolerance can be horribly intolerant to people whose actions we dislike.

The Whatcott decision creates some interesting  distinctions.  For example, one can legally ridicule, belittle and insult the dignity of others but one may not express anything that “exposes or tends to expose [anyone] to hatred” on the basis of gender, age, race, religion, disability, sexual orientation, etc.  This will be adjudicated on a case-by-case basis. The lines of separation between opposing and denouncing something versus being very offensive versus likely promoting hatred are not obvious ones.  Various judges in this case were unable to reach any consensus on these issues and facts, until it reached the Supreme Court of Canada, which rendered a unanimous decision.

After a dozen years and millions of dollars in time and money, the Court upheld the tribunal’s decision regarding two of the four challenged pamphlets.  Whatcott was ordered to pay $7,500 to the government-funded Saskatchewan Human Rights Commission and its legal costs throughout, even though Whatcott was successful in having half of his impugned flyers judged acceptable and more than half of the ordered compensation – as well as a major part of the legislation – struck out.

Colin McKay will graduate this year (2014) with a B.Comm. from the Haskayne School of Business, University of Calgary.