You are here: Home / Feature Articles / 38-3: When it Hurts to be Home / Corporal Punishment and Domestic Violence: The Case for “Anti-Spanking” Legislation
Reading Time: 5 minutes 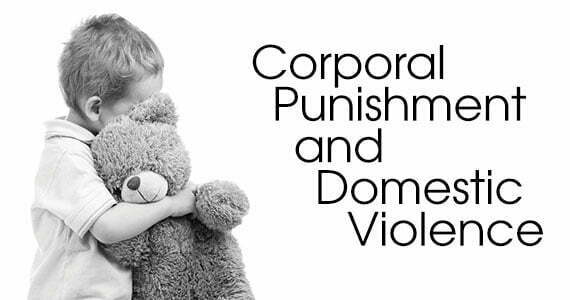 Recall conversations among parents deliberating the joys and perils of raising children – does the following sound familiar?

“I wouldn’t normally spank my kid, but if he crosses the road without looking, you bet I’m gonna make my point! That’ll be the last time he does that.”

While spanking is reportedly becoming an a gauche social practice in Canada, the Canadian Incidence Study of Reported Child Abuse and Neglect documented 18,688 substantiated cases of physical abuse occurring in Canada in 2008, of which just over half (54%) involved a child being hit with a hand, including slapping and spanking.

Corporal punishment is defined as “the use of physical force with the intention of causing a child to experience pain, but not injury, for purposes of correction or control of the child’s behaviour” (Straus, 2001).  Though a number of organizations and the research community have strongly opposed the use of corporal punishment, in Canada, parents, and other caregivers including schoolteachers, can use “reasonable” force to correct children’s behaviour under Section 43 of the Criminal Code.

Determining the prevalence of corporal punishment is challenging as estimates are usually based on parents self-reporting, which is subject to deliberate omissions and errors of recall. However, Canadian surveys over the last decade have shown rates as high as 50% (Durant & Enson, 2004).

A 2012 CBC poll of 6,417 readers echoes these findings. The poll asked readers what they thought about Canada’s current legal provisions allowing spanking; about a third thought that the law was reasonable (36%) and some (9%) thought it was too constraining. About half (53%) were opposed to hitting a child. Clearly, spanking remains a common, yet divisive, practice in Canadian households.

Impacts on Kids: The Cycle of Domestic Violence

Despite the commonly held belief that corporal punishment used by loving parents is a good, or at least harmless, disciplining technique, an overwhelming body of research now shows that even mild and moderate corporal punishment has harmful side effects. Some studies have found that a majority of child abuse cases arise in situations where the abuser intended to discipline the child, and two-thirds of abusive parents admit that their abuse began as an attempt to discipline their child (Gershoff & Bitensky, 2007).

Documented negative effects of corporal punishment that reach into adulthood include mental health issues, criminal behaviours and aggression. Given that children learn relationship skills and social behaviours in the home, it is not surprising that those who witness or experience violent relationships go on to perpetuate these patterns in adulthood.

How does this happen? Experiences of violence in the home teach children that violence is an acceptable, even normal, part of parenting and intimate relationships (Bower-Russa, Knutson, & Winebarger, 2001). In fact, some research has found a direct relationship between the level of abuse experienced by mothers and the beliefs of elementary school-aged children about the intrinsic dominance of men (Graham-Bermann & Brescoll, 2000).

Given that children learn relationship skills and social behaviours in the home, it is not surprising that those who witness or experience violent relationships go on to perpetuate these patterns in adulthood.

Research also suggests that, by adolescence, children who have experienced or witnessed violence often have trouble trusting others and forming healthy intimate relationships with peers (Levendosky, Huth-Bocks, & Semel, 2002), leading some to question whether they would be able to control their aggression and become non-violent partners (Goldblatt, 2003).

Of course, not all children who experience or witness violence develop these propensities, but the risk is high. One of the largest and most compelling studies conducted to date found that the childhood experience of physical abuse, sexual abuse, or growing up with a battered mother doubled the risk of domestic violence victimization or perpetration in adulthood (Whitfield et al., 2003). Even mild to moderate corporal punishment that causes no physical harm is associated with increased aggression in adulthood (Gershoff, 2010).

Alternatives to Spanking: What Can Be Done?

Though Canada ratified the Convention in 1991, spanking remains legal and widely practised.

Growing public concern and strong research evidence supporting “anti-spanking” legislation have led 35 countries to ban corporal punishment in the past thirty years. Such legal bans are closely associated with large decreases in support for, and use of, corporal punishment as a child-discipline technique (Zolotor & Puzia, 2010).

take all appropriate legislative, administrative, social and educational measures to protect the child from all forms of physical or mental violence, injury or abuse, neglect or negligent treatment, maltreatment or exploitation, including sexual abuse, while in the care of parent(s), legal guardian(s) or any other person who has the care of the child (Article 19).

Though Canada ratified the Convention in 1991, spanking remains legal and widely practised. Though only part of the solution, the Government of Canada should repeal Section 43 of the Criminal Code, RSC 1985, c. C-46, which currently allows the use of reasonable force by schoolteachers, parents and persons standing in the place of a parent to correct children’s behaviour. Once repealed, provinces and territories should develop policies for police and prosecutors that outline the proper enforcement of the assault provisions of the Criminal Code in cases of corporal punishment. There is further need for public awareness messages to inform Canadians about the harmful effects of corporal punishment and the development of parenting education (Durant & Enson, 2004). Province-wide parenting strategies to build the capacity and skills to promote positive forms of discipline are critical to success.

No one is saying parenting is easy, yet as parents and caregivers, it is incumbent on us to guide children’s behaviour, while “respecting their rights to healthy development, protection from violence and participation in their learning” (Durrant, 2007). The use of “positive discipline,” as described by Joan Durrant is founded on child rights principles and research on children’s healthy development and effective parenting. The major characteristics of positive discipline are that it:

For more information on positive discipline, follow this link to Durrant’s manual for parents and caregivers.

Ultimately, this is a call to ground parenting in non-violence, empathy, self-respect, human rights, and respect for others. It is about providing children with the same protection from physical assault as is given to Canadian adults. And it is about stopping the transmission of domestic violence.