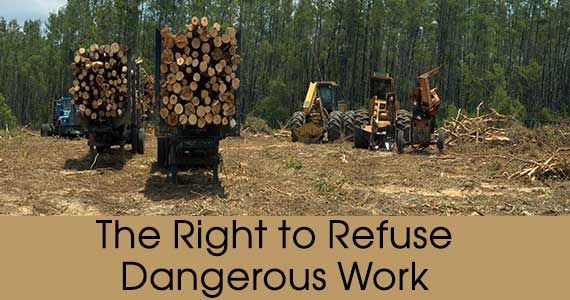 There may, undoubtedly, be cases justifying a wilful disobedience of such an order; as where the servant apprehends danger to her life, or violence to her person, from the master; or where, from an infectious disorder raging in the house, she must go out for the preservation of her life. But the general rule is obedience, and wilful disobedience is a sufficient ground of dismissal. – Turner v. Mason (1845) 14 M. & W. 112 at 118; 153 E.R. 411 (Ex.)

Most jobs have some element of danger in them.  At a minimal level, the danger associated with our employment does not go much beyond the regular hazards of being alive, such as getting to and from work every day, the stress of working with difficult people, or the infinitesimally small chance of having a meteor or airplane crash through our building.  There is interest in the growing field of occupational disease, where certain occupations may be exposed to contaminants or conditions that cumulatively and slowly manifest themselves in the workers over time.  Examples include firefighters inhaling toxins, professional drivers and diesel fumes, office workers and repetitive strains, and soldiers who later suffer post-traumatic stress syndrome.  In this article we address acute, serious, imminent dangers encountered in performing one’s job at work.

Employers have a legal obligation to protect their workers. …the circumstances under which the right to refuse dangerous work can be exercised are limited and procedures are prescribed in order to quickly assess imminent danger claims by workers.  As far back as 1845, the common law singled out danger as a proper excuse to refuse to follow the boss’s  orders.  In the 170 years since, this common law has become codified into legislative rules and practices.  The Canadian provincial and federal legislation is similar.  We will describe the modern rules in this article with a reference to the Alberta legislation which does not apply to federal, interprovincial, domestic or agricultural workers.

Employers enjoy the prerogative to instruct their employees about what work their employees do and how they should do it.  On the face of it, an employee who refuses to obey legal orders is insubordinate and subject to immediate termination for cause.

What constitutes legally unacceptable risk and danger in the workplace is usually a very contentious matter.  It can be assumed that bosses are also generally concerned about safety.  They certainly have the legal duty to create safe working conditions.  Employers and bosses do not like to be second-guessed.  If work can be vetoed by any worker on a mere unilateral assertion of a safety concern anytime without consequences, the employer’s authority is undermined and workplaces may become unmanageable.

Accordingly, the circumstances under which the right to refuse dangerous work can be exercised are limited and procedures are prescribed in order to quickly assess imminent danger claims by workers.  If a worker has refused to work and if that refusal was not on proper factual and legal grounds, that worker might be viewed as insubordinate and disciplined.  It is important, therefore, for workers to know the law and standards in relation to refusals before they are presented with what they may perceive as an imminent danger at work.

Refusals for Imminent Danger at Work

In Alberta, workers’ statutory rights to refuse to perform imminently dangerous work are governed by section 35 of the Occupational Health and Safety Act, RSA 2000, c O-2.  Imminent danger is defined as a danger that is not normal for that occupation or one which someone working that job would not normally accept. A worker who refuses to work or operate equipment for reason of imminent danger, must “as soon as practicable, notify the worker’s employer at the work site of the worker’s refusal and the reason for the worker’s refusal.” Therefore, it is a relative determination according to the occupation or work being performed.  Police and military personnel will be evaluated according to what are normal hazards and danger in that work.  What would be out-of-the-ordinary,  abnormal danger in your occupation or workplace?

Workers are actually under a duty not to perform any work – including not operating any tool or equipment – that they believe, on reasonable and probable grounds, carries an imminent danger to the health or safety of themselves or other workers present at the work site.

The employer may require the refusing worker to remain at the work site and be temporarily re-assigned without loss of pay to other work assignments that he or she is reasonably capable of performing.  The employer then must investigate and act to eliminate the imminent danger,  and ensure that no other worker is assigned to use the tool or equipment or to perform the work which the  prior worker reported as too dangerous.

The worker may still be of the opinion that the imminent danger remains.  In such a case, the worker may file a complaint with an Occupational Health and Safety (OHS) officer. Real imminent dangers are, well, imminent and few employees can wait a year for final adjudication.  That makes this legal process rather impractical. The officer must also investigate and prepare an independent written record of the worker’s complaint, the investigation, and the action prescribed to eliminate the imminent danger.  The officer must give the worker and the employer a copy of the record.

If the worker or employer disagrees with the OHS officer’s conclusions about the imminent danger, that person can appeal it to the OHS Council within 30 days of receiving the officer’s record.  A further appeal lies to the Court of Queen’s Bench within 30 days from the decision of the Council.  This process seems to be quick and responsive, but it could easily take a year to get to the final appeal.  Real imminent dangers are, well, imminent and few employees can wait a year for final adjudication.  That makes this legal process rather impractical.  Few serious imminent workplace dangers are handled through this process.

Since workers and employers often disagree about workplace danger, the employer frequently views the refusing employee as insubordinate.  Some form of discipline of that worker may follow. A worker who reasonably believes he or she has been disciplined for raising a safety concern or refusing to do unacceptably dangerous work may complain to the OHS department. Discipline can take many forms, such as suspension, demotion, probation, assignment to less desired shifts, reprimands, loss of pay or benefits, transfer and even dismissal. If a worker is acting in compliance with the workplace health and safety legislation, such as good faith reporting of a safety concern at work, the employer must not take disciplinary action of any kind against that worker (section 36).

A worker who reasonably believes he or she has been disciplined for raising a safety concern or refusing to do unacceptably dangerous work may complain to the OHS department.  An investigatory and appeal process similar to the imminent danger complaint above is invoked.  These DACs currently comprise some 90% of the Alberta OHS Council’s appeals.  They usually involve mixed issues of performance management and safety and they can be difficult to sort out on the facts as to the real motivations and bases for the discipline.  The Council may order reinstatement of the worker on the same terms and conditions under which the worker was formerly employed, cessation of disciplinary action, payment to the worker of lost wages and removal of any reprimand or other reference to the matter from the worker’s employment records.  Statistically, most DACs are dismissed because, on the facts of the cases, it is not clear that the worker’s compliance with the legislation is what caused the discipline.

The Canada Labour Code (Part II) was recently amended in response to the large percentage of unjustified or frivolous DACs.  The federal Finance Department had  found that  over 80% of work refusals were unrelated to danger.  The definition of “danger” focuses on immediate and severe risks: “any hazard, condition or activity that could reasonably be expected to be an imminent or serious threat to the life or health of a person exposed to it before the hazard or condition can be corrected or the activity altered.”  The Minister may batch similar complaints from the same employer and reject appeals considered to be “trivial, frivolous, vexatious or made in bad faith.”

Whether it is hard hats that obscure vision, or harassing or violent co-workers, second-hand smoke, prison guards, dangerous machinery, psychiatric patients in hospitals, unarmed border guards, window washers, heavy lifters or roofers, the danger must be imminent and not a normal danger for the occupation.  Employees retain the right to refuse work if they reasonably believe the work constitutes a danger to themselves or others.  One cannot refuse dangerous work when the refusal itself puts the life, health, or safety of another person in direct danger.

Workplace safety begins with dialogue between employee and employer.  The employer must conduct an investigation, and if the employee continues to refuse work, there is a multi-tiered appeal process.

Both employees and employers should be aware of the implications behind an employee’s right to refuse dangerous work.  Employees must carefully consider work refusals.  Unjustified refusal could lead to job discipline.  Employers have a legal obligation to maintain safety in the workplace.  Safety is everyone’s business.

Aleksandar Gvozdenovic is finishing his B.Comm. at the Haskayne School of Business, University of Calgary and will start law school in the Fall of 2014,